The years drift by, the players, coaches and owners come and go, and the Islanders’ long wait for another appearance in the Stanley Cup finals continues.

On Friday night, the Islanders were one win away from reaching hockey’s grandest stage for the first time since 1984, one goal from prolonging their season with a chance to win their first title since they claimed four consecutive N.H.L. championships from 1980 to ’83.

But the powerhouse Tampa Bay Lightning, playing at home in front of a raucous crowd, were too much to overcome.

The Lightning beat the Islanders, 1-0, in a riveting Game 7 of their conference final playoff series in Tampa, Fla., on Friday to advance to the Stanley Cup finals for the second straight year.

Tampa Bay will play the Montreal Canadiens with a chance to repeat as the champion, while Montreal will look for its first title since 1993, the last time it was in the finals. Game 1 will be Monday night in Tampa.

The finals will be an odd-couple matchup, between a venerable franchise from hockey’s ancestral homeland and a nouveau riche crew from sunny Florida. The Canadiens are one of the most storied franchises in all sports, winners of a league-record 24 titles dating to 1916, while the Lightning have been in the league since just 1992-93. That was the season that ended with the Canadiens hoisting their most recent Cup in celebration at the old Montreal Forum.

This season’s edition of Les Habitants did not seem much like the long-lost heir to a dynasty. The Canadiens finished the regular season with 59 points, the fewest of any of the 16 playoff teams, but in the postseason they have coalesced into a dynamic combination of gritty veterans and high-flying youngsters like Cole Caufield and Nick Suzuki.

The Lightning, meanwhile, have ridden the hot goaltending of Andrei Vasilevskiy, who recorded his fourth consecutive series-clinching shutout, dating to Tampa’s win over the Dallas Stars in last year’s finals. He made 18 saves on Friday, but the Tampa Bay skaters also blocked 21 shots and fought relentlessly against a scrappy Islanders team.

Yanni Gourde scored a short-handed goal 1 minute 49 seconds into the second period. He came off the bench on a shift change and was wide open when all of the Islanders followed Anthony Cirelli into the corner. Cirelli found Gourde, who took the pass and slotted the puck past Semyon Varlamov’s glove side, then punched the air in celebration. 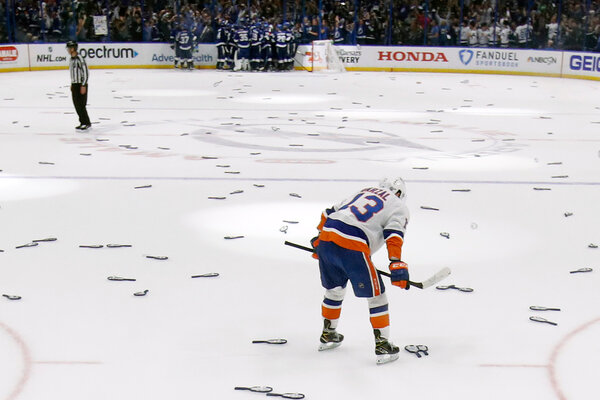 The Islanders had chances, especially when Mathew Barzal was staring down at an open net late in the third period, but he could not control a bouncing puck. He was one of several Islanders fighting back tears after the game, and he said he felt particularly bad for the veteran players on the team.

“I’ve got a few more years, but you want to win for those guys,” Barzal, 24, said. “It hurts seeing those guys in the locker room, knowing how close we were.”

The loss signaled the end of an era for the Islanders. They have been known for most of their history as the denizens of Nassau Coliseum, a singularly noisy home arena in Uniondale, Long Island, where good times and bad were shared with passionate local fans.

But next season the team is scheduled to move into a sparkling new arena in nearby Elmont, leaving behind the concrete bunker where it played the vast majority of its home games since the franchise’s inception in 1972.

It was in that arena that the Islanders won four consecutive Stanley Cups and made it to a fifth consecutive final the year after. It was where the retired numbers of great players like Denis Potvin and Bryan Trottier hung for so long.

There were many losing seasons in the old barn, as the Coliseum was often called, plus questionable management decisions, ownership issues and attempts to move the team. In 2015, the Islanders began playing home games at Barclays Center in Brooklyn, far from the club’s traditional home base. But the arrangement ultimately failed and the team went back to Uniondale.

Then in May 2018, the Islanders hired Lou Lamoriello as their president, and he hired Barry Trotz, who had just led the Washington Capitals to the Stanley Cup championship, as head coach. The team has shown steady improvement.

“This group is special,” Trotz said. “Their character, their work ethic, their will, their commitment. To me it’s undeniable, it’s so strong, and that’s why this group believed that we could do this.”

In 2019, the Islanders won one round in the playoffs, and last year they made it to the conference final, losing in six games, also to Tampa. This year they took it one game further, but could not reclaim the glory of the 1980s.

Barring something unexpected, the Islanders’ final moments at Nassau Coliseum will be among their best, short of their championships. The record will show that their last game there saw Anthony Beauvillier score in overtime, unleashing a wild celebration with fans throwing cans of beer, bottles of water, shoes and hats on the ice.

It was all quickly cleaned up, after the fans had left for good.

The team’s dreams of reclaiming the Stanley Cup will be pursued in a new building.

“We’re chipping away at it and we’re getting closer,” Trotz said. “Hopefully, we can break through.”

On Friday, though, they wilted in the Lightning’s building.

“Our fans kicked it up a gear,” Tampa Bay’s captain, Steven Stamkos, said, “and it was an amazing atmosphere tonight.”

Vasilevskiy agreed. “That was a textbook Game 7,” he said.

And now the Lightning will aim to build at least part of what the Islanders had in the ’80s.

The Canadiens have the long-term pedigree, but the Lightning want to cement their place in hockey history.

“It’s all well and good to one day put on your gravestone that you won a Stanley Cup,” Jon Cooper, the coach of the Lightning, said. “But to do it two years in a row, multiple times, now your team is special.”