Australia’s world champion freestyler Ariarne Titmus will miss a series of key pre-Olympic camps on the Gold Coast as she recovers from a shoulder injury.

Swimming Australia described the setback as ‘minor’ and it’s not unusual for swimmers to suffer ailments in training, especially those who cover the miles Titmus does in her program at St Peters Western under coach Dean Boxall. 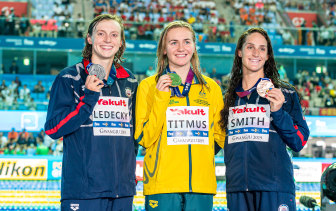 But any setback in an Olympic year is a blow and Titmus will be the biggest name missing when the Dolphins converge at a trio of Gold Coast pools from Thursday, the first time they have been together as a squad since 2019.

Titmus, 20, had previously been bulletproof on her climb to the top of the sport and will be central to Australia’s medal hopes in Tokyo across the 200m, 400m and 800m events, as well as the relevant relays.

She stunned American great Katie Ledecky at the 2019 FINA World Championships in South Korea and their rematch in Tokyo shapes as one of the biggest showdowns of the Olympic pool.

That is still on track but Titmus will stay in Brisbane to regain her fitness rather than join her teammates this week.

“Ariarne is currently managing a minor left shoulder complaint. As the National Event Camps will consist of a lot of high intensity training sessions, the decision was made for her to remain in her home program to continue with her own structured rehab plan,” a Swimming Australia spokesman said.

It’s little surprise SA is taking a cautious approach given Titmus’ growing importance to the squad, although Olympic champion Kyle Chalmers will be at the NECs after having shoulder surgery at the end of last year.

Chalmers and fellow Rio gold medal winner Mack Horton will be two of the team leaders on the Gold Coast, along with the Campbell sisters Cate and Bronte, Emma McKeon and backstroke and medley veteran Mitch Larkin.

With Titmus out, Kaylee McKeown will headline the next generation of budding Olympians, along with Lani Pallister and Tom Hauck.

Normally the NECs would be scattered across the country for their 10-day duration but, with border restrictions still unpredictable, they are all on the Gold Coast, with the Gold Coast Aquatic Centre, Bond University and the Palm Beach Aquatic Centre all in play.