Home » Sport » In a surreal scene, Josh Donaldson of the Twins was ejected after hitting home run when he rounded the bases and then antagonized the umpire by kicking dirt on home plate 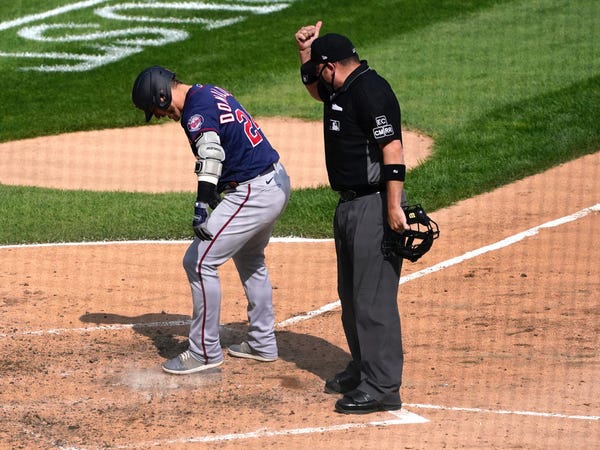 After squabbling with home plate umpire Dan Bellino during his sixth-inning at bat, the former American League MVP ripped a home run and celebrated the feat by kicking dirt all over home plate at the end of his trot, prompting Bellino to toss him from the game with an angry "get the f— out of here."

With the score tied at two runs apiece, Donaldson was leading off for his Minnesota Twins during the at bat in question. Bellino called a stike he disagreed with on a 2-0 count, and Donaldson appeared to turn around to ask whether the call was on the pitch itself or the checked swing.

The two began exchanging words from there, and Twins manager Rocco Baldelli swiftly emerged from the dugout in an attempt to keep his star from getting ejected. On the next pitch, Donaldson hit an 381-foot dinger over the left-field fence and subsequently pulled his petty antics at home plate.

Bellino immediately threw him out of the game and added a sarcastic "that's right, you're a real big man" as Donaldson walked away.

Check out the video from the broadcast below:

And here's the untouched version: