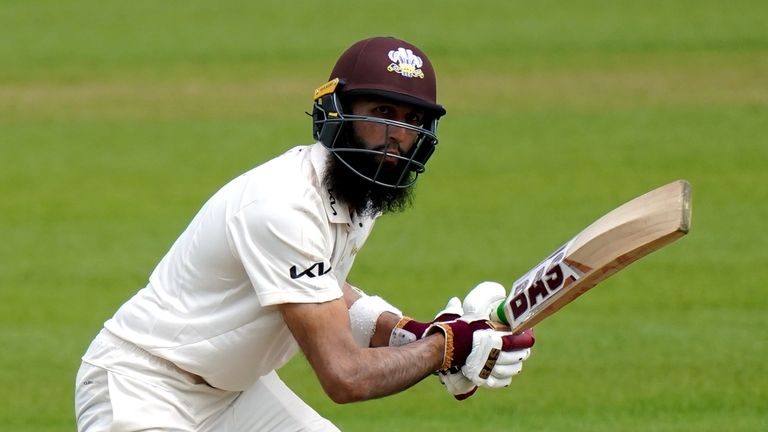 A defiant batting display for the ages from Hashim Amla staved off defeat for Surrey and thwarted Hampshire’s push for victory and their quest for a top-two finish in Group Two of the LV=Insurance County Championship.

Resuming on 6-2, Surrey held on for an unlikely draw, reaching 128-8, with former South Africa batsman Amla batting all day to be unbeaten on 37 from 278 balls.

💬 "Not many people can do that." – @backandacross on Hashim Amla.

Amla demonstrated incredible restraint to repel an attack which bowled an incredible 64 maidens and over 500 dot balls in a glacial innings where the hosts were made to pay dearly for three dropped catches.

Despite Amla’s heroics, the result almost certainly ended any chance of Surrey being one of six teams to qualify to play in Division One later in the season and the opportunity to win the title and the Bob Willis Trophy.

A defiant half-century from Jack Leaning enabled Kent to cling on for a draw at Emirates Old Trafford as Lancashire confirmed their qualification for Division One. Lancashire vs Kent scorecard

Leaning’s unbeaten 53 from 199 balls ensured the visitors were eight down at the close of day four of a rain-affected match that had been dominated by the hosts since James Anderson’s 7-19 helped dismiss Kent for just 74 in their first innings.

Lancashire pushed hard for the win, with Tom Hartley’s best first-class figures of 4-42 giving them more than a sniff as the clock ticked down on a gloomy afternoon in Manchester.

But Leaning and an impressive James Logan, who finished unbeaten on three, hung on to see out time and allow Kent a share of the spoils.

Harry Swindells advanced his career-best first-class score to 171 not out as Leicestershire‘s match with Somerset at Taunton ended in a high-scoring draw. Somerset vs Leics scorecard

The 22-year-old wicketkeeper had batted for almost six-and-a-half hours, facing 322 balls and striking 24 fours and a six, when heavy rain set in during the lunch interval on the final day, causing play to be abandoned.

By then Swindells and Ed Barnes had taken their unbroken eighth-wicket stand to 203, with 23-year-old Barnes on 83, also a career-best, an innings spanning 165 balls and featuring 14 boundaries.

Skipper Ben Brown scored his 20th first-class century as Sussex‘s match against Glamorgan at Hove ended in a draw. Sussex vs Glamorgan scorecard

Brown got to three figures with a six off Tim van der Gugten and immediately declared Sussex’s second innings on 263-6, setting Glamorgan a target of 275 to win in 51 overs.

Off-spinner Jack Carson took three wickets and there were still 10 overs remaining when Kiran Carlson top-edged a sweep to leave Glamorgan 131-5, but Andrew Salter and Dan Douthwaite stood firm, taking their side to 154-5 when the players shook hands after two balls of the final over.

Warwickshire and Durham will both enter the final round of Championship matches next week with sights firmly set on a top-two finish after rain resulted in their clash at Edgbaston ending in a draw. Warwickshire vs Durham scorecard

An afternoon of heavy rain leaves the umpires with no option but to call time.

Bears take 11 points and are second in @CountyChamp Group 1 going into the final week.

The bad weather which plagued the match, washing out the entire first day, continued into the fourth, preventing any play after lunch. In the two hours of cricket that were possible, Durham advanced to 253-7 in reply to Warwickshire’s 237 all out.

David Bedingham stroked a classy unbeaten 92, while Craig Miles took 5-62 to make it back-to-back five-wicket hauls in successive championship matches, but the match was long dead as a contest.

It was a frustrating four days for the two teams – with Durham subsequently deducted two points for a slow over-rate – but both have it all to play for in the final round starting on Sunday.

Warwickshire know that victory over Worcestershire at New Road will secure them a top-two finish, while Durham sit third in Group A and will face leaders Nottinghamshire at the Riverside knowing a strong performance could push them into the top tier.