IT is not only Fulham players rallying behind trolled disabled footballer Rhys Porter.

The 13-year-old became an internet sensation when stars from the Championship side ran to celebrate with him after going 1-0 up against Bristol City last Saturday. 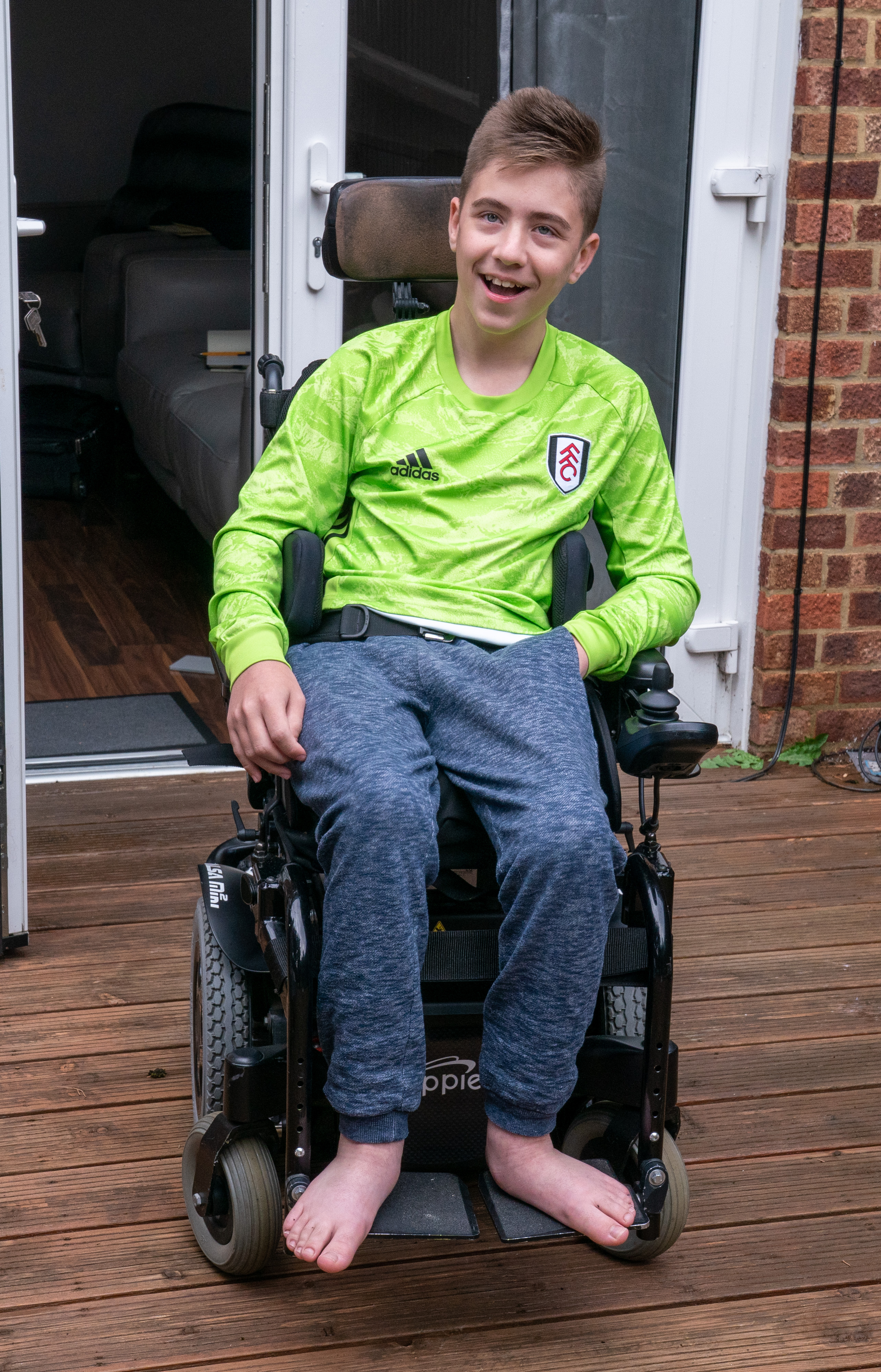 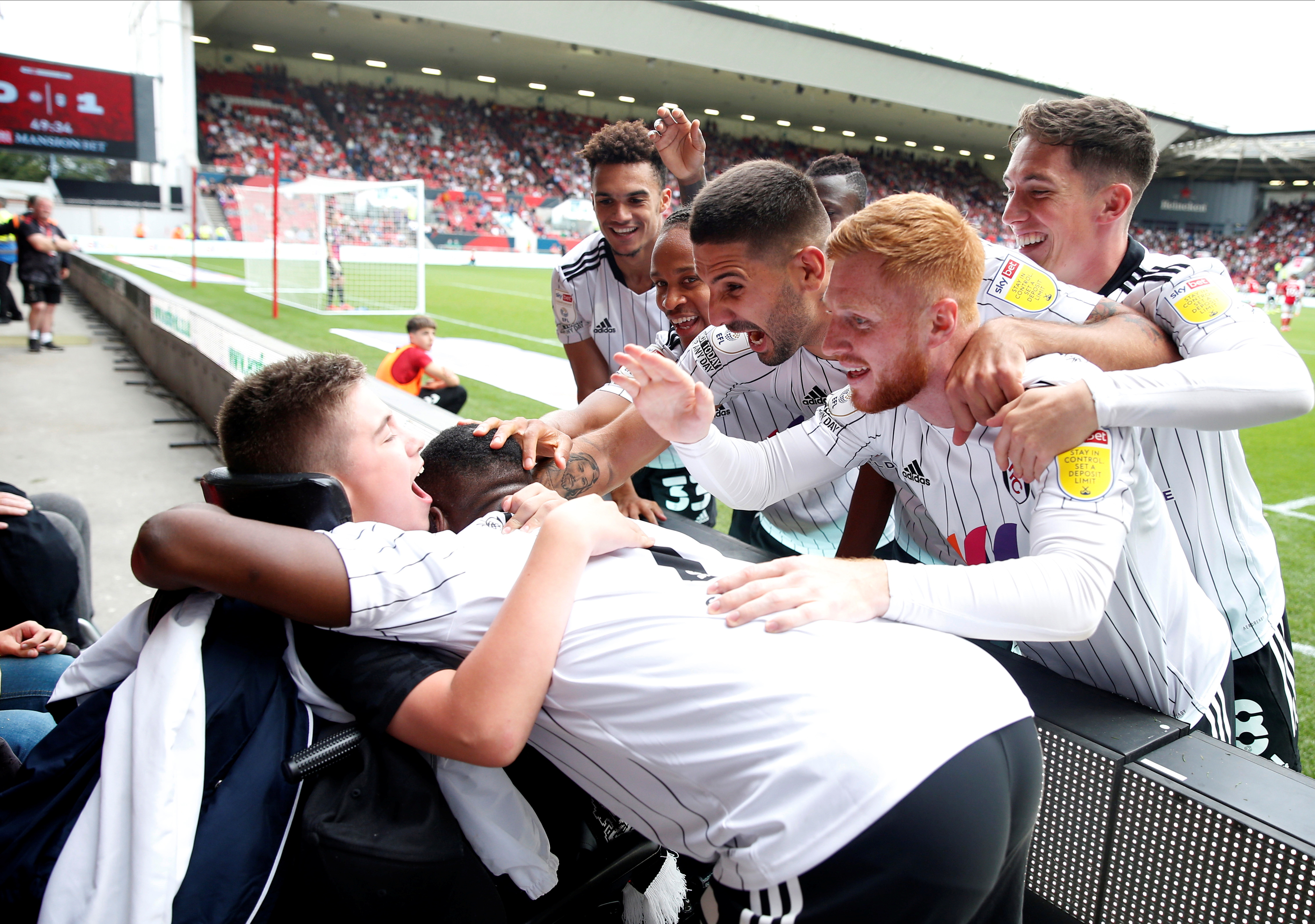 But what happened after the game was perhaps even more exciting for the youngster, who hit headlines after a TikTok video on him playing for his football team drew thousands of vile messages online.

His mum Kelly has told how a gang of “serious-looking” Fulham fans raced down the train to find him on the way home after the match.

She says: “They were the real hardcore fans that don’t wear any Fulham stuff.

“They were carrying their plastic pints, banter in full flow. Suddenly, one of the guys tells everyone in the carriage that Rhys, ‘Is a legend’.

“He said the whole of Fulham’s Hammersmith End has got his back. Anyone picking on Rhys in the street is going to need to watch out. He’s one of the lads, wheelchair or not.

“Then this bloke said, ‘If your mum can’t take you to football, I’m going to come and get you’.”

At the family’s home in Hillingdon, Middlesex, Rhys breaks into a wide smile and says: “It was brilliant!”

Kelly, 41, an aviation company HR worker, adds: “That probably meant as much to him as any of the many messages of support he’s had because that’s what he strives to be.

“That moment on the train shows his message is getting across — ‘I’m in a wheelchair but there is nothing different about me. I’m still a lad. I still like football, it’s just my legs aren’t working’.

Rhys, an only child, was born with cerebral palsy, a condition that affects muscle control and movement.

He was unable to walk and, aged seven, developed epilepsy, but the seizures appear to have stopped.

But his dream has always been to play football just like his friends.

His dream of being a player came true in 2013 when he and pal Tom Manning, 16, joined Feltham Bees, a football team for disabled youngsters.

Sometimes Rhys would play outfield in his electric wheelchair but he loved the freedom of going in goal on his hands and knees.

But a six-second video of him making a save during a Surrey pan-disability tournament he posted on TikTok in June sparked a torrent of cruel comments. 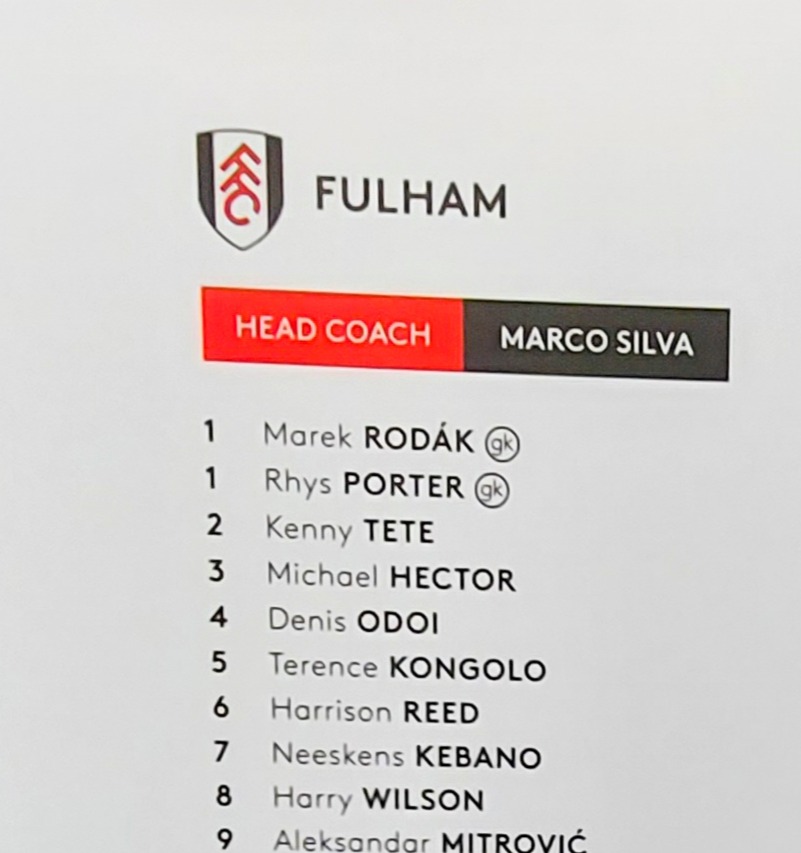 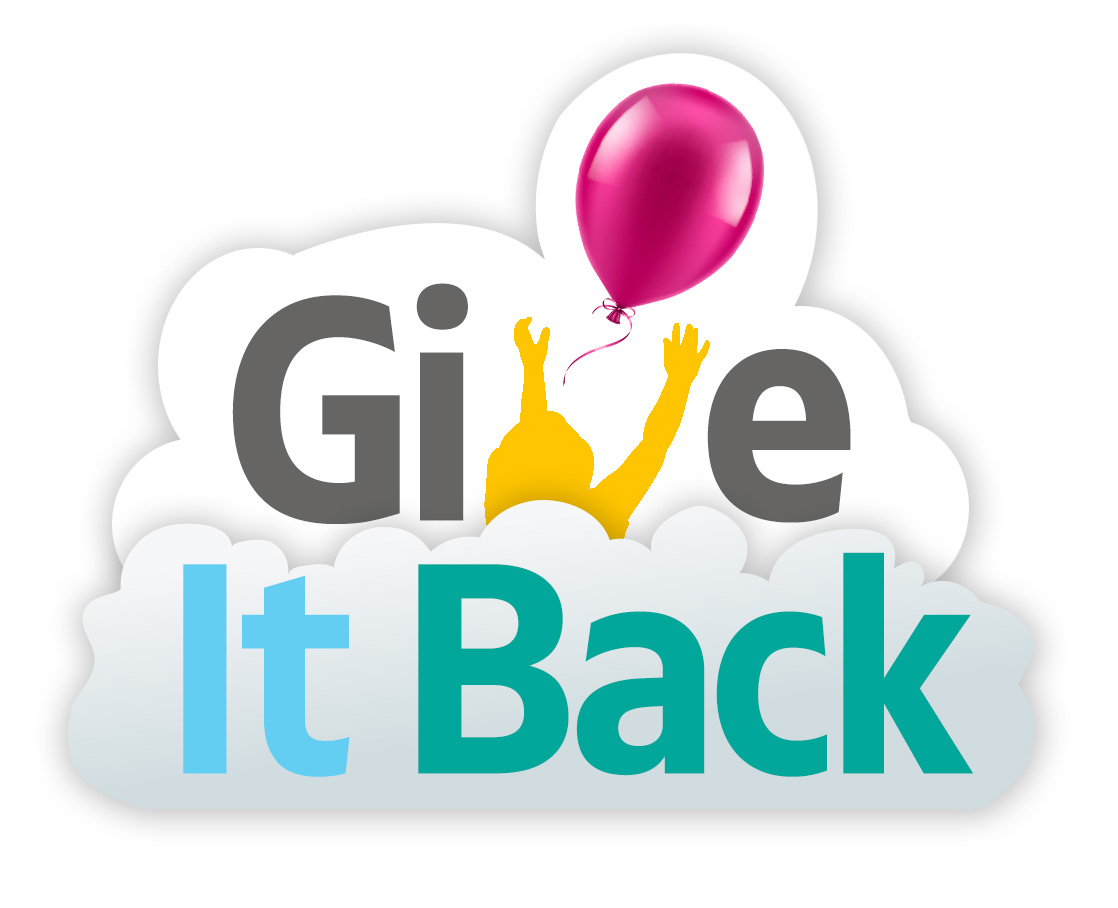 Adam, 43, who reduced his hours as a builder to be Rhys’s carer, says: “Some of the hurtful comments were from kids, but much of it was adults and that boiled my blood even more.”

Kelly adds: “We knew it was adults by the names he was called, like ‘vegetable van der Sar’. Van der Sar is a player from our era, a child wouldn’t use that name.

“Another said, ‘Read these comments before you come to the pub tonight, they’re really funny’.

“Somebody else wrote, ‘Oh look at him, he is doing an Eriksen’, on the day Christian Eriksen had a cardiac arrest on the pitch playing for Denmark in the Euros.”

Adam says: “When he saw all this hate, Rhys got in a right state, screaming the place down, saying, ‘I don’t want to play football any more. Why are people so cruel?’.

“One thing we’ve never done is shield Rhys from the fact that life is harsh. If you tell him the truth he takes it on the chin, listens and then deals with it the way he wants to deal with it.”

So the family sat down together and read every vile comment. They even found photos online of some of the people behind the slurs.

Kelly says: “In the beginning we set out to drown the negative comments with positive ones. I dropped emails to Fulham and other clubs.

“Arsenal commented, ‘Really great save, Rhys’. But off the back of the positivity, there were comments like, ‘Why the hell is a club commenting on a kid that has just jumped a centimetre?’.

“I don’t know if it was a good thing or a bad thing because it was just making it more and more negative.”

Then, instead of censoring the offenders, TikTok removed Rhys’s video for “attracting too much hate”. It later backed down.

Rhys decided to fight back against the haters with positivity. He raised nearly £20,000 for disability charity Scope by doing 20 saves a day and encouraged friends to take part in Scope’s Make It Count challenge with their own fundraising activities.

Rhys also created his own campaign #BU, which stands for Be You, to encourage everyone to include those who are disabled or different in their lives and activities.

Kelly says: “Being a teenager in a wheelchair he has noticed that you don’t often get invited with the rest of the class to hang around in the park and do all the things boys of his age do.”

In his bedroom, surrounded by football memorabilia, Rhys designed a logo to go on hoodies, which he sells to raise more money for Scope.

His #BU logo shows stick people who are disabled, black, gay and white all high-fiving each other.

Rhys would love England and Arsenal star Bukayo Saka — who was a victim of trolls during the Euros — to wear one. He says: “I want to try to make a difference for disabled people. You should have the same opportunities and chances as anyone else would.

“You shouldn’t have to be anyone different, be compared or face bullying or torment for who you are. I may not be perfect but I’m good enough. I’m me, just me.”

Help is needed now more than ever.

We are asking YOU to sign an open letter written by parent Maureen Muteesa to urge the Government to fund Covid recovery policies for disabled children. Add your support here.

PM Boris Johnson sent a handwritten letter telling Rhys how sorry he was to hear about the nasty comments.

The PM added: “Please don’t let it bother you and carry on doing everything you enjoy.”

Last week Rhys went to Wembley to play wheelchair football with the stars of the England Cerebral Palsy team, who have now invited him to St George’s Park, the national training ground.

And Fulham’s players were so impressed with how Rhys has beaten the bullies that they invited him to train with them last week.

Centre back Tim Ream says: “People think players are role models and inspirations. What Rhys is doing is more of an inspiration than anything any of us can do.”

The youngster says: “I told Bobby ‘if you don’t score on Saturday against Bristol then I’ll take the hoodie back’. When Mitrovic scored, I saw Bobby wave at me and the players all came over, jumped the barrier and give me a big hug. It was amazing.”

The game ended 1-1 but by then video of the goal celebration had gone viral. Through the early hours of the following morning, Rhys’s phone pinged non-stop.

Kelly says: “I woke up in the night thinking, ‘What the bloody hell is that?’.

“His phone was lighting up with thousands of messages of support from all over the world — even someone from Peru. He has had the week of his life, every boy’s dream.”

And the dream has carried on.

At their Craven Cottage ground on Wednesday — where Fulham beat Swansea 3-1 — Rhys was listed in the match programme as Goalkeeper Number 4.

Breaking into that massive grin, he said: “Three injuries and I’m on!” 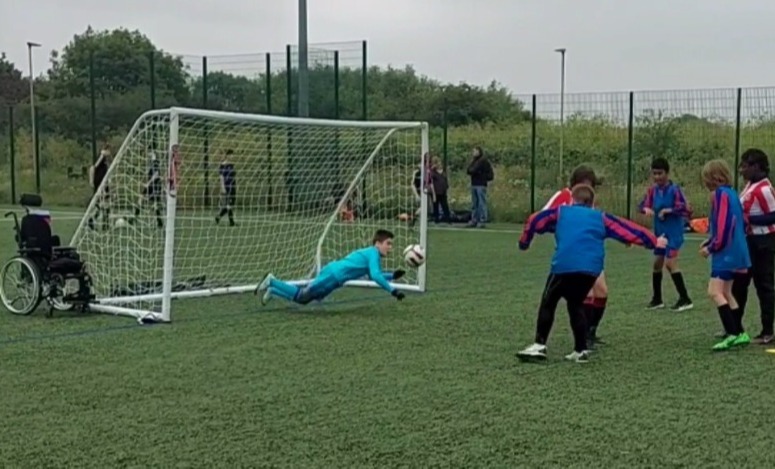 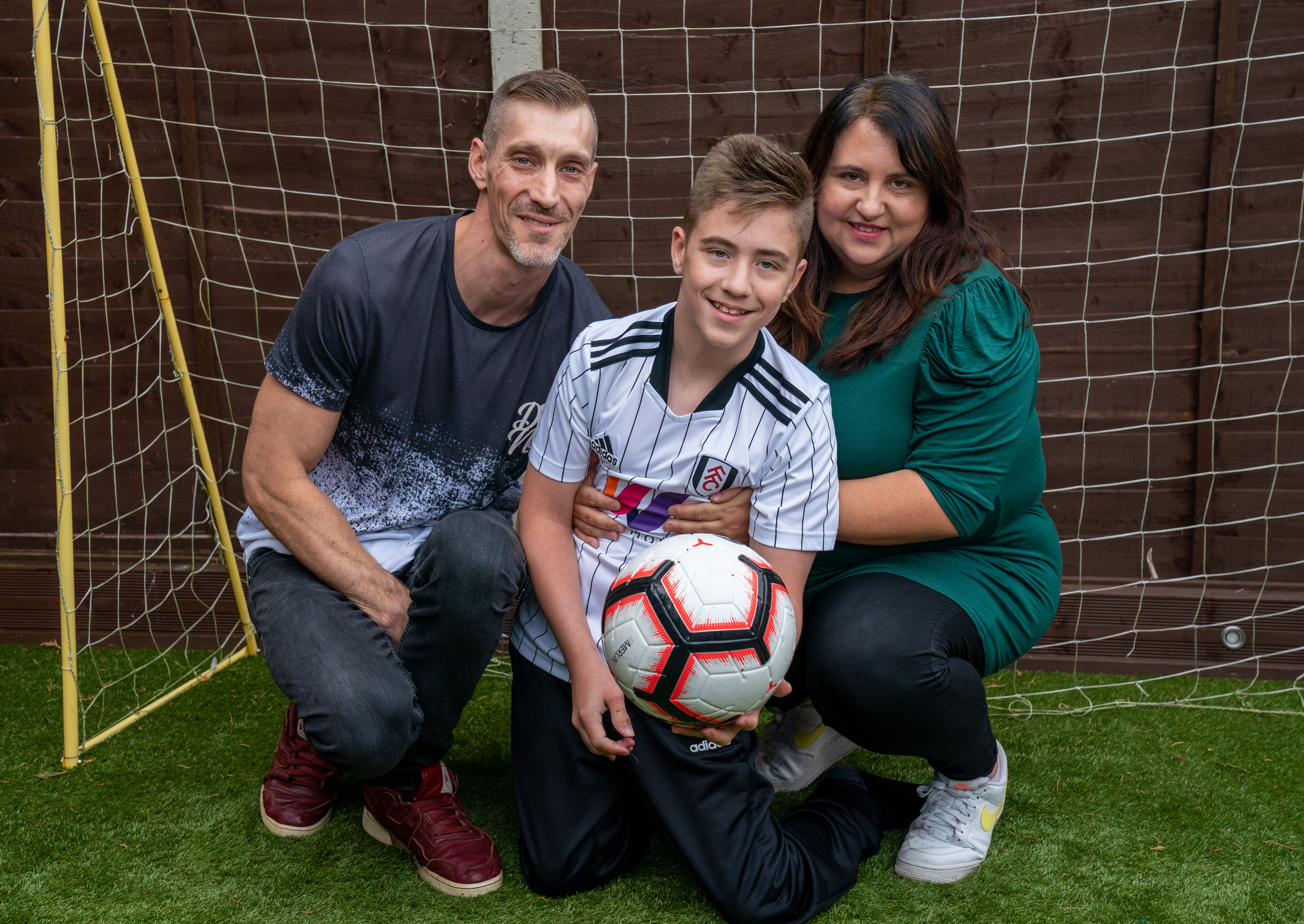 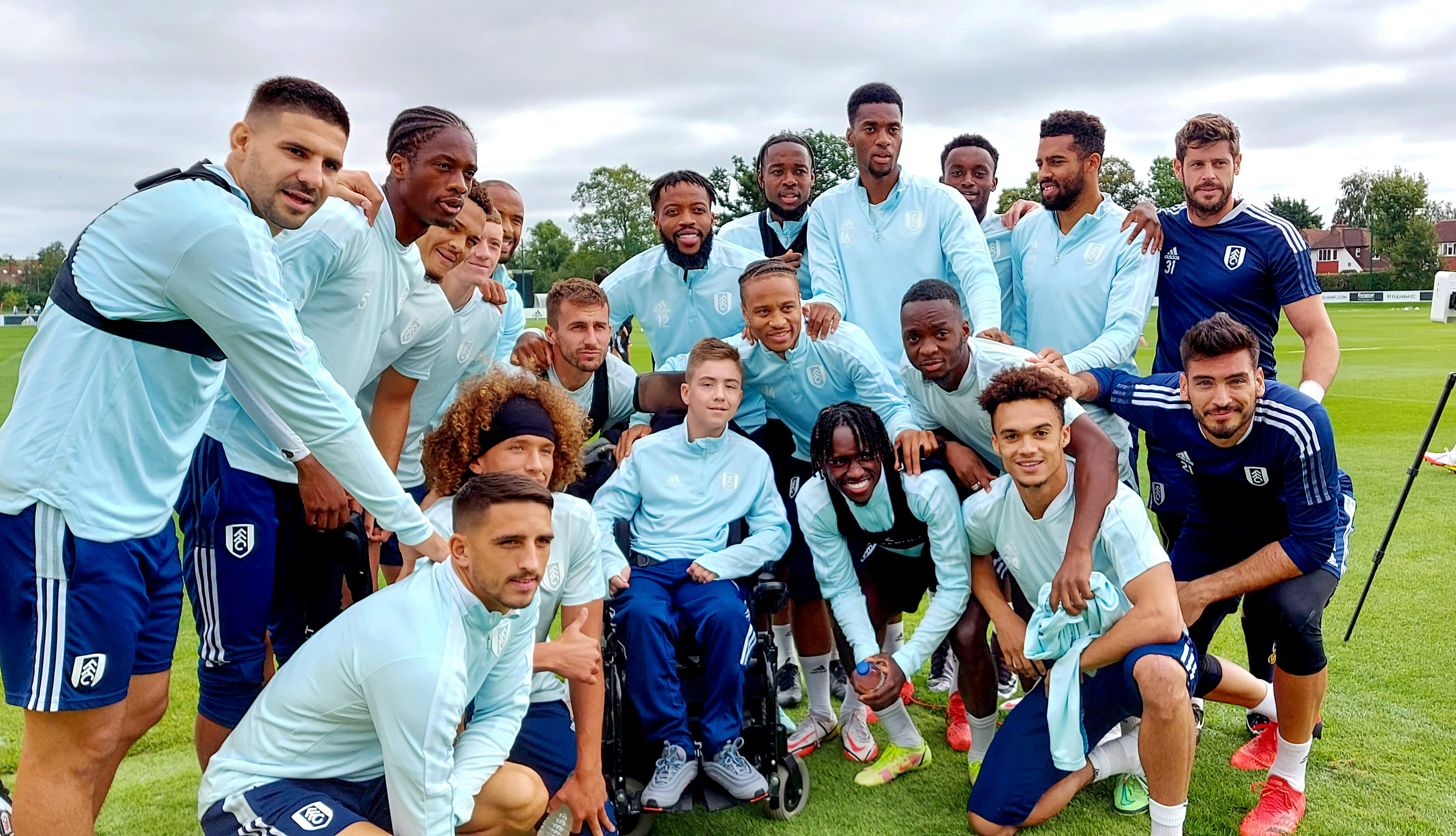