Home » Sport » Gabriele Grunewald Couldn’t Win This Race. But Oh Did She Shine.

There are many reasons to feel lucky in this life, not the least of which for me was the chance to meet Gabriele Grunewald two years ago.

She walked onto the track that day for the Prefontaine Classic in Eugene, Ore., as twilight descended, bathing the red track in a blond light. She soon took off running in the 1,500 meters, her hair bobbing in a ponytail.

Grunewald was one of the nation’s best runners, and her stride was smooth and sure at first, then grew choppy and labored. Coming into the final turn, face scrunched, she mustered the burst that is the reserve of top-flight runners and edged past a competitor by half a second.

She had finished ninth out of 10. She smiled, embarrassed about her time, and all I could think was that I had just seen a heroic victory.

“It’s just kind of rough,” she told me later that evening. “That shadow keeps sneaking in.”

By that she meant her rare and incurable metastatic cancer known as adenoid cystic carcinoma. This week it caught Grunewald on a final lap. She died on Tuesday at 32 and left a husband, Justin Grunewald, for whom she was everything.

I would have had difficulty picking Grunewald out from a fine pack of runners in 2017 save for the purple half-moon scar that stretched across her abdomen. Nine months before that race surgeons had cut a large tumor out of her liver. Just before that race doctors had found two new lesions in her liver. Less than two weeks after that race she began daily chemotherapy sessions.

It was Grunewald’s fourth bout with cancer, and she was determined to turn running into an agent of her salvation. She dreamed of making the 2020 Olympic team. She spoke of cancer eloquently, no pretense here, words tumbling out. She knew what she was up against, and she knew the horsemen that accompanied her now: vigilance and denial and the creep of fear.

“I’m a young adult with cancer,” Grunewald told me. “I don’t always love talking about it. It’s not a made-for-TV movie. It’s real. It’s scary.” 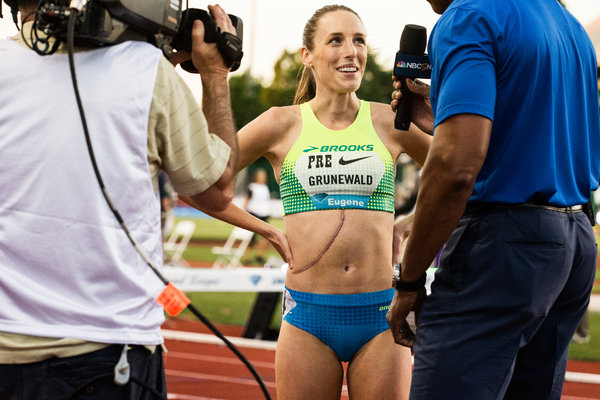 She had grown up in tiny Perham, Minn., in Otter Tail County, northwest of Minneapolis. Running, even as temperatures dropped to 10 below and ice formed on her eyelashes and lips, was her freedom. She made the University of Minnesota track team as a walk-on and slowly got better and better. She met a lanky marathon runner who made conversation, but he was so shy she wasn’t sure if it was flirting.

It was, and in time he became her husband.

She discovered the cancer for the first time while a fifth-year senior in 2009. She got the news while in Arizona for a race. The next day she ran a personal best of 4 minutes 22 seconds in the 1,500, known as the metric mile.

Grunewald had surgery and radiation. Strands of her sandy-brown hair fell out and her skin burned. She returned to running three months later, and again her times got better. It was as though the reality of cancer had stripped away an enamel of fear of failure.

“It’s like I lost all excuses for not pushing myself to reach my fullest potential,” Grunewald told me.

In 2011, doctors found cancer again, and there were more treatments. In 2016, after she fell short in the Olympic trials, Justin gave her a morning hug. He felt a mass.

“Your stomach feels funny,” he told her.

She had entered what became the final battle. “I knew it was there during all those years,” she told me. “I kept trying to push it out of my mind. I tried to convince myself: ‘This is not my life.’”

She ran that day in June 2017, then a few more, and her running career ended. She continued to speak out, to post on social media, to champion new treatments and to start a nonprofit — the Brave Like Gabe Foundation, which raises money for research into rare cancers and encourages cancer patients to exercise. “My scars,” she said, “teach me to embrace life.”

From that evening in Eugene, I recall a periwinkle sky and a Milky Way that nearly throbbed with light, and I recall walking away and turning back to see the two of them jogging together, Justin and Gabriele, leaning in toward each other as young lovers do.

A day or so ago, Justin, who is a doctor, posted on Instagram a note about his dying wife that included a letter he had written to her a while back.

“I know life is scary and I know we have won the lottery of uncertainty, and it’s not fair, but I still choose our life of uncertainty and at times fear, over any alternative option I could think of. I have so much fun with you and have learned more from having you as my best friend and wife than I learned in the rest of my life combined.”