Home » Sport » From the Archives, 1996: Kieren Perkins, the indisputable world no.1 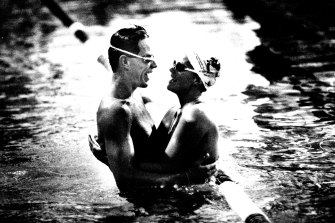 In a magnificent solo swim – no one could stay with him in the Australian Institute of Sport pool – Perkins was ahead of the world record time all the way and clocked 14 minutes 48.40 seconds. This took 1.96 seconds off the record of 14:50.36 set by Germany’s Joerg Hoffman when he beat Perkins in the world championships in Perth 15 months ago.

Yet the 18-year-old Queenslander was far from happy with last night’s effort, which followed his world 400 metres freestyle record on Friday night.

“I just wanted that record. I think I could have gone a lot quicker because, technically, it wasn’t a good race,” he said.

“I went out too fast and died in the middle. Because of that, I’m not very happy with the swim… I know I could have gone a little quicker.” 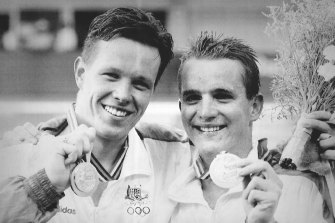 Australians Kieren Perkins (gold) and Glen Housman (silver) with their medals at the 1992 Barcelona Olympics later that year.Credit:Craig Golding

Perkins now holds four world records — the 400, 800 and 1500 freestyle marks and the 1500 metres short-course record — and is poised to become Australia’s greatest male swimmer. He and his coach, John Carew, believe the two records since Friday night are a taste of far greater things to come.

Carew said Perkins would be awesome at the Barcelona Olympic Games in July. Perkins said he would not be satisfied until he won the Olympic 1500 metres gold medal, although he also stands an excellent chance in the 200 and 400 metres.

Carew wanted Perkins to smash Hoffmann’s record last night to “put the wind up” the German, who will be one of Perkins’s chief rivals at the Olympics in July.