PAGEANTRY AND SUNSHINE AS GAMES OPEN

The Olympic Flame burns in Melbourne. The 1956 Games have begun. 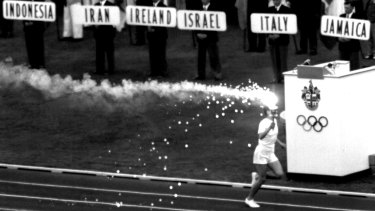 Ron Clarke runs into the MCG with the Olympic Torch during the opening ceremony.Credit:Harry Martin

In two hours of supreme spectacle and sunlight, a Main Stadium crowd of 103,000 yesterday heard the Duke of Edinburgh declare the Games open.

Countless thousands saw the ceremony on television screens and a vast audience listened to vivid radio descriptions of the opening.

At the Main Stadium superbly colourful teams from 67 nations, massed bands and solemn undertones of ancient ceremonial created a pattern of brilliance about Melbourne’s Olympic day.

It was a triumph of organisation and efficient execution — a fitting preliminary to the sporting pageant that begins today.

It will be warm again today — yesterday’s temperatures reached 86.8 degrees — and mostly fine. A few showers are expected this morning.

From the moment the Duke of Edinburgh’s car swept on to the brick-red perimeter of the running tracks yesterday until the last national team had marched off emotion erupted from the hearts of the Main Stadium crowds. 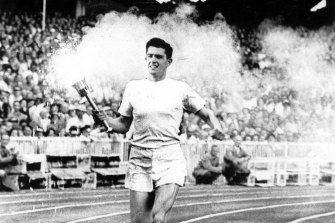 Ron Clarke carries the flame around the arena during the opening ceremony at the Melbourne 1956 Olympics.Credit:Fairfax Archives

There were times of wild cheering and times of silence. When young Melbourne athlete Ron Clarke came on to the arena at 4.37 with the Olympic flame carried high, the great crowd stormed a welcome.

A few minutes later, he mounted the steps to the gleaming cauldron high above the grandstands.

As he saluted the athletes of the world and the people of Melbourne, a hush came over the stadium. It lasted a full second, long enough for Clarke to put the flame from Greece to the Melbourne cauldron.

The cauldron flamed and the crowd cheered again, this time with mighty volume.

In a day of great events this was the pinnacle. But even lesser moments will become great memories.

The city was a carnival from early morning until late last night. Thousands in the city, less fortunate than those with seats in the stadium, had many things to see.

Yet the spirit of the day emanated from the great international gathering at the Main Stadium, where all teams were cheered and a few more than others.

Melbourne’s crowd seemed conscious of its responsibilities to the world. The abandon of League grand finals was replaced by a more orderly enthusiasm. 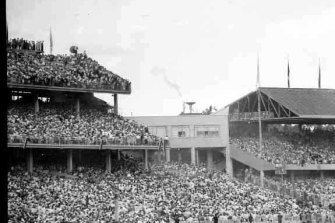 There was a tremendous air of expectancy over the ground at midday.

By 2.30, when the Royal Australian Navy band marched on to give a magnificent display of figure marching, the atmosphere seemed to be building to a climax.

The band finished its display by forming the five-ring Olympic symbol and the applause was deafening.

Massed army bands marched on and formed up behind the dais and facing the empty Royal box.

This moment was a lull.

It lasted until exactly 3 p.m., when the Duke of Edinburgh’s arrival was announced and his car drove into the arena.

The Duke, in uniform of Admiral of the Fleet, responded to the crowd’s affection with a waving arm as his car circled the track. 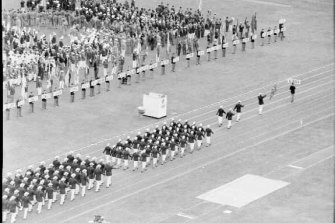 The Australian team marches in the opening ceremony.Credit:The Age Archives

The car stopped, a Boy Scout opened the door for the Duke to alight and saluted sharply.

The National Anthem rang around the concrete amphitheatre before the Duke stepped forward to meet the Prime Minister (Mr. Menzies), the chairman of the organising committee (Mr. Kent Hughes), the president of the International Olympic committee (Mr. Brundage) and the Lord Mayor (Sir Frank 8elleck).

Again there was a lull.

It only served to impress the colour of the arena on the eye, the reds and blues of the bandsmen, the green of the smooth grass field, the red of the tracks that cut the turf.

Promptly at 3.30 the blue and white flag of Greece appeared in the tunnel under the unlit caldron and the descendants of the Games founders marched into the arena in their traditional place at the head of the nations.

Royal-blue blazers for Greece, dark grey uniforms for the Afghanistan team that followed, light grey for the Argentine, two brown for Austria…

The representatives of the world suddenly became part of Melbourne’s Games. And Melbourne, more clearly than at any previous time, suddenly realised its full stature as host city.

There were cameos of colour in every team.

The startling raised-arm salute of the Japanese brought quick silence, then applause; the “long” shorts of the Bermuda team raised a delighted cheer; the split skirts and spiked heels of the Colombian women earned a deep roar of approval.

The Hungarians were given a dominating reception… dominating until local feeling came to the surface with the green blazers and fine marching of the Australians.

The Russians swung their arms across their bodies rhythmically, Emil Zatopek waved a cloth cap above the more intent heads of his Czechoslovakian team mates. There was an impressive precision about all the marching that only missed being military because it was always gay.

Mr. Kent Hughes spoke of the day beginning “a new chapter, full of promise, in the story of the Games” and introduced Mr. Brundage.

The I.O.C. president, a slight figure amongst so much pageantry, walked to the rostrum, looked about him and asked the Duke of Edinburgh to open the Games.

In a hush, the Duke spoke.

“I declare open the Olympic Games of Melbourne, celebrating the 16th Olympiad of the modern era,” he said, and the stadium burst into sound—trumpet fanfare, cheers and, seemingly, a roar of pride.

In all this, the white Olympic flag, bearing the five symbolic rings, was hauled to the top of the 80 feet flagpole at the head of the straight track.

From all around the ground, pigeons burst into the air, a spectacular link with the ancient Greeks.

The crash of the 21-gun salute at that inspiring moment seemed strangely in harmony with the ideals coming to life on the arena.

Too many things were happening too quickly for anyone to absorb the small human incidents that shone like bright colour in a broad picture.

Yet the diversions emphasised the perfection of the general scene.

A member of the army colour party collapsed in the stifling Stadium heat. Not one of his comrades moved to his aid.

These things, and a host of others, were only slight distractions in the pageant as it moved to the climax.

The amplifier announced the Flame. Ron Clarke, a young sportsman in the Olympic tradition, came through the tunnel, stood erect for a moment with the brightly burning torch held above his head in salute, and ran on to the tracks.

The crowd, sensing the link with the glory of ancient Greece, cheered Clarke’s way. Athletes of all the nations broke ranks and streamed across the ground to watch the Flame pass.

It reached the point at much it had entered and, briefly, disappeared. There was quietness everywhere.

Then it flamed again, high above the arena and kindled the much greater flame in the caldron.

This was the high point In a day of inspiration.

Twelve hundred voices sang the Olympic Hymn. And as the choir sang “…Happy the man chosen for fame…” the sun came from behind a cloud and illuminated an impressive scene.

The Hymn died and the Archbishop of Melbourne, robed in scarlet and black, walked out to the arena to deliver his address of dedication words that revived the historical links of the Olympic movement.

Again the choir sang, this time the thrilling Hallelujah Chorus which became more thrilling in that setting.

The flag-bearers of all nations grouped around the rostrum as John Landy, in everybody’s mind the greatest Australian athlete, took the Olympic oath on behalf of all competitors.

The bearer of the Australian flag stood on his left. Landy held a corner of his country’s flag in his hand as he took the oath.

The Games themselves had already been dedicated. Landy was dedicating the efforts of all athletes “to the glory of sport.”

The National Anthem again swelled around the stadium and the flag-bearers rejoined their teams.

Immediately, the feeling of the crowd seemed to change. The ceremony and pageantry were done and gaiety came into its own.

The teams regrouped—and there had been a great deal of mingling in the ranks—and marched off. Their exit was less formal than their entrance.

There the ceremony ended. Other things began to intrude.