Home » Sport » From a broken back to surfing’s ultimate test: Taking on 60ft monsters

Jamie Mitchell, the 46-year-old Coffs Harbour lifeguard Kelly Slater once described as one of the greatest unknown sportsmen of all time, will paddle into surfing’s most prestigious event with busted ribs.

He thinks they’re bruised. Or it might be cartilage damage. He doesn’t actually want to know how bad they are after a “40-50 foot big-wave workout” in Todos Los Santos, Mexico.

Because the last time Mitchell had an x-ray, he had broken his back on a 60-foot Nazare monster.

Less than a year later, Mitchell is re-waxing a trio of nine-foot plus boards ahead of The Eddie Aikau Big Wave Invitational.

For all and sundry, it’s simply The Eddie. And it’s the most coveted ticket in the surfing world – an invite-only event that only runs when waves at Hawaii’s Waimea Bay hit 40-plus feet all day.

Held in honour of national and surfing icon Eddie Aikau, the first lifeguard to work on Oahu’s North Shore and revered for saving more than 500 people before he drowned at the age of 31, this is only the 10th time the event has been held in almost four decades.

“So I wasn’t letting a broken back hold me back,” Mitchell tells the Herald from Hawaii, where 50-60 foot wave faces are expected for Sunday’s event, (Monday morning AEDT).

“It honestly feels like it was a lifetime ago I was sitting in a Portuguese hospital. I do stop occasionally and think ‘I had a broken back last February’. In some ways I’m just very grateful to be back surfing at all.

“But I have worked really hard, every day it was months and months of rehab for this exact reason. I was in bed for a week or two, then in a back brace for two months and didn’t surf for six months.

“Last week in Los Santos was big, solid stuff. I haven’t had as much of that as I’d like but I guess it’s like riding a bike. Hopefully you never forget.”

Mitchell is, frankly, scarily frank when it comes to the pummelling his body takes and the ocean often doing it.

His Instagram features a photo dump of the 60-foot wall of Portuguese water that had him seeing stars, jet skis scrambling and eventually, his L3 vertebrae in pieces.

Deeper still in the annals of the internet, there is 2014 footage of Mitchell paddling into what was then the largest wave ever attempted, an 80-foot wave in France that he didn’t make.

But then Mitchell has long pushed himself to places human beings really aren’t meant to go.

Kelly Slater and fellow world champion John John Florence are among those who will be in the Waimea water, with the world’s best female big wave riders including Keala Kennelly, Andrea Moller and Paige Alms, also surfing in The Eddie for the first time.

Slater’s description of Mitchell as “one of the greatest unknown sportsmen of all time,” is based on the Australian’s 10 straight wins in the Molokai to Oahu ocean paddle race.

Fifty-two kilometres between the Hawaiian islands as they’re hammered by open-ocean waves, through the same channel where Aikau himself drowned in 1978.

Mitchell beat all comers between 2002 and 2011, never lost a race he entered and feels more at home in those Hawaiian waters than anywhere else in the world. 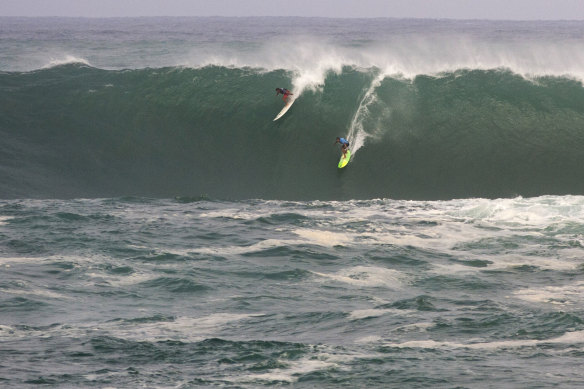 “This feels like where I’m meant to be,” Mitchell says.

“I had stickers and photos of Eddie on my board when I would paddle across that channel all those years ago.

“I do feel a deep connection with this event, Hawaii and the ocean. I think that’s why I worked so hard to get my body right and get this invitation.

“Coming from a little town like Coffs Harbour, I had a dream when I was 13 years old and I was telling people I would be in the Eddie. They all told me I was crazy, so to be here now for a second, it’s just surreal.

“I remember getting a VHS tape in 1990, I was 13 and watched this Eddie Aikau event tape over and over. I worshipped it and the guys surfing in it.

“The Eddie Aikau, it doesn’t matter if you’re Kelly Slater, John John Florence and they’ve won world titles, they’ll tell you it’s the best event in the world hands down.

“My two daughters are seven and five now, they’re going to remember this Eddie event, it’s going to be a great day and I’m excited to be a part of this.”