Fox News Flash top headlines for May 29 are here. Check out what’s clicking on Foxnews.com

A small child was rushed to medical attention Wednesday night after apparently being struck by a foul ball during a Cubs-Astros game in Houston.

Play was halted during the fourth inning after the ball – off the bat of Cubs hitter Albert Almora Jr. – apparently hit a young girl, the Houston Chronicle reported. 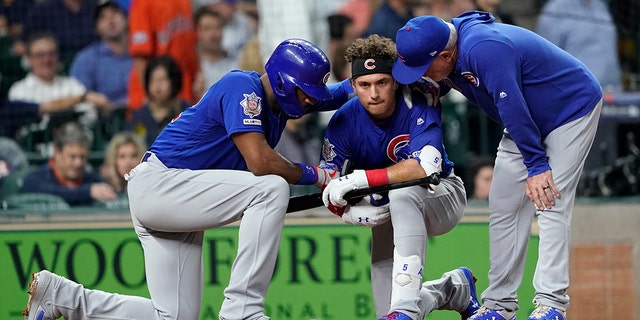 Chicago Cubs’ Albert Almora Jr., center, takes a knee as Jason Heyward, left, and manager Joe Maddon, right, talk to him after hitting a foul ball into the stands during the fourth inning of a baseball game against the Houston Astros Wednesday, in Houston. (Associated Press)

A man was seen carrying the child out of the seating area, while replays showed that Almora seemed to instantly know that the ball had struck a spectator.

Almora was later seen distraught on the field and photos posted online showed him being consoled by a security guard as well as Cubs manager Joe Maddon and another Cubs player.

Houston's Sports Talk 790 radio station later reported that the child was conscious and responsive and was expected to be OK.

This is a developing story. Check back for updates.