Home » Five Things to Know as M.L.S. Starts Its Season

It’s a couple of months late, but Major League Soccer’s 2021 season is ready to start on Friday. So what’s new?

M.L.S. has brought major league sports to everyone’s favorite weird city, and of course Matthew McConaughey is a co-owner of Austin F.C. (He has also been given the title “minister of culture.”) “We’re a very multicultural place,” he said. “An Austin fan can go talk Austin F.C. with a banker in London now, and a cabdriver from Lagos.”

Charlotte is to follow in 2022 and St. Louis in 2023. But plans for a Sacramento franchise in 2024, which would have been the league’s 30th team, may be falling through after the lead investor withdrew.

After a truncated 2020 season, teams will be playing a full 34-game schedule. But to minimize travel, each team will play only two or three games against members of the other conference. The Canadian teams will be playing stateside, in shared stadiums, at least at first: Montreal in Miami, Toronto in Orlando and Vancouver in Salt Lake City.

Fans will be coming back, with most teams planning to fill 20 percent to 50 percent of their stadiums. 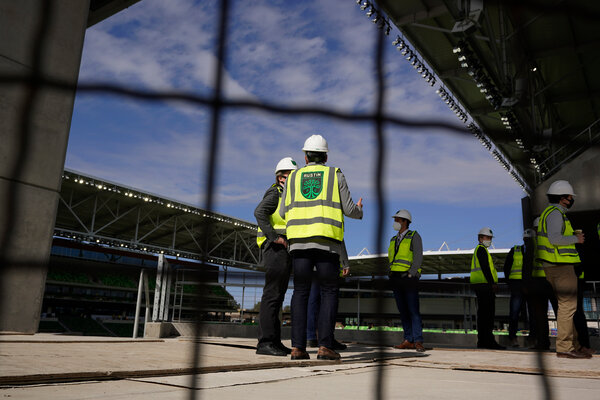 In addition to Austin, which will play in a new stadium, Cincinnati will get its own home after playing at the University of Cincinnati’s football stadium for two seasons. Columbus will open the season in its old stadium before moving to a new one in July.

There were fewer big-name signings than in some years, but there is plenty of excitement about Brenner, a 21-year-old Brazilian striker. After scoring 21 goals in 39 games with São Paulo, his new home will be F.C. Cincinnati, which is aiming to make more of a splash after making little impression in its first two seasons. Brenner cost the team a reported $13 million, ranking in the top-five M.L.S. transfer fees ever.

While perennial contender Seattle looks good again, the betting favorite for the season is Los Angeles F.C., led by Carlos Vela and last season’s leading scorer, Diego Rossi. Should the bookies be right, the team would win its first M.L.S. Cup in its fourth year of existence.