Home » Sport » Fit at last, Cherry-Evans has no need for ‘little white lies’

Daly Cherry-Evans confessed that he may have told us lies, sweet little lies, regarding his fitness for the opening two games of State of Origin series.

Players telling "little white lies" in rugby league? The revelations never cease in the greatest game of all.

The Maroons skipper sounded a little sheepish when he spoke to media in Brisbane, admitting he may have been a touch frivolous with the truth when talking up his health ahead of the first two instalments of the 2019 series.

He shouldn't have worried. After just beating the clock to play in game one just five weeks after leg surgery, Cherry-Evans was brave but it was clear he had some way to go before he was back to his best. 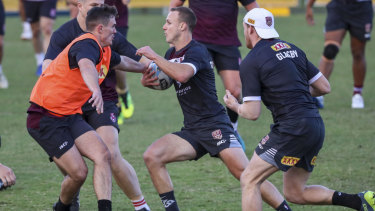 Unlike games one and two, Daly Cherry-Evans says his preparations have been flawless for game three.Credit:AAP

While he was confidently talking up his chances before that encounter, Maroons medical staff took much more convincing and it would have come as little surprise should they have ruled him out of contention.

He had a shoulder concern for game two but only now does he feel as if he enters Origin back in the same condition that helped him become one of the most-dominant players in the NRL over its early rounds this season.

"I have probably thrown a few little white lies out there around my fitness over the last couple of months," Cherry-Evans said. "But that is a part of footy.

"The fact that I have taken part in every training session this week is something that I haven't done since coming back from injury, so I will take a lot of confidence out of my preparation this week and the way I am moving around the field.

"For once I can honestly say I am feeling good and feeling great going into a game of footy."

Cherry-Evans has projected a vibe of confidence throughout the series, even if his body wasn't quite at the same stage as his public utterances. Now, he has the chance to take on the NSW line with ball in hand, providing his forwards can climb off the canvas after the game-two drubbing in Perth.

Should that transpire, that can only be good news for Queensland, with Cherry-Evans able to involve Cameron Munster from fullback and potentially open the game up for new halves partner Corey Norman.

"My job, first and foremost, is to steer this team around. I am the halfback and I need to be communicating," he said.

"Off the back of that if we can generate those quick play-the-balls I feel as though I am playing my best when I am attacking the defensive line."

Installed as huge underdogs for game three, Cherry-Evans had a sense of defiance about him before the team flew to Sydney on Monday. He promised a return of the kind of intensity that saw them power to victory in game one and promised a different side to the one that never fired a shot in the west.

But he wasn't on board with the suggestion that this game may define him as an Origin player, which had been floated by Maroons great and current selector Darren Lockyer.

"It is a big game, no doubt about it," he said. "There has been a bit of talk about potentially this game defining me.

"If the result goes the way I think it will, that's great, but I have never been a player to have one game define me. I will play too much football beyond this game for it to define me as a player."

‘Is EU worth the price?’ Now Ireland must take ‘a long hard look’ at Brussels membership