Even the English were gushing over Donnell Wallam after the Diamonds shooter brushed aside weeks of scrutiny to help Australia to a 3-0 series sweep in her starting debut.

Australia won 57-53 at the Brisbane Entertainment Centre on Thursday, following victories in Newcastle and Sydney. 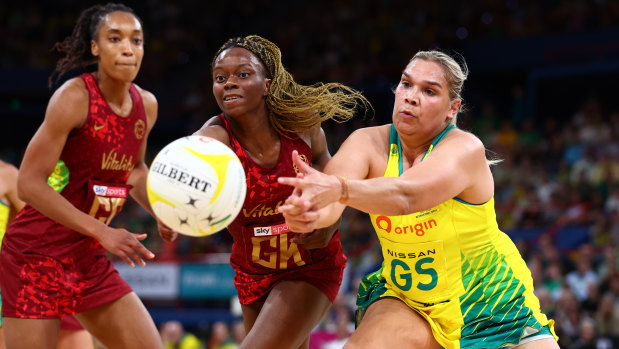 Funmi Fadoju of England and Donnell Wallam of Australia compete for the ball.Credit:Getty Images

Goal shooter Wallam was a perfect 15-from-15 at the main break and finished with 25-from-26 before being substituted for Sophie Garbin (14-of-18) in the third quarter.

Australia led 9-2 after five minutes and by nine goals at halftime before England closed with five goals at the final break.

The margin was just three with 10 minutes to play, England rallying again as the clock ticked down to ensure a nervy finish in front of 8566 fans.

Wallam’s performance came on the back of intense off-court scrutiny that followed the withdrawal of Hancock Prospecting’s $15 million sponsorship deal.

She was said to be uncomfortable wearing a uniform bearing the company logo.

But the Victorian government stepped in to fill the void, before Wallam – ruled out of the Sydney win with illness – did her talking on-court.

English goal shooter Eleanor Cardwell said the team had learned plenty from watching the controversy unfold, adamant they too would stick together if faced with a similar situation.

“A lot of the limelight’s been on (Wallam), a lot of controversy in Australia’s house,” Cardwell said.

“When she came on in Newcastle it definitely lifted them.

“We’re the opposition, but it’s something bigger, way bigger, than netball. We were like, ‘That is awesome for her to do that’.” 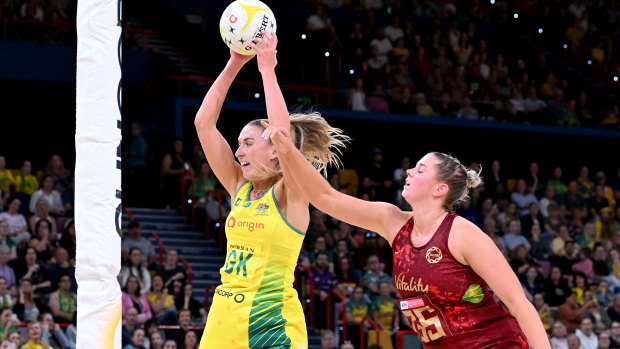 There were no lay-up goals like the one Wallam produced to win the match off the bench in her Newcastle debut.

Instead, the 28-year-old patrolled the circle with authority, captain Paige Hadley (26 feeds, 16 assists) exploiting the height advantage to feed the Queensland Firebirds talent close to the goal.

Coach Stacey Marinkovich lauded Wallam’s hot start for establishing the decisive buffer, while Hadley admitted she was too focused to notice the huge cheers every time the hometown favourite touched the ball.

“What she’s been able to do in the two Tests is so exiting … she’s only going to grow, (I) can’t wait to see what she does in the future,” Hadley said of Wallam.

Goal defence Maddy Turner had two intercepts and a rebound in the first quarter of her starting debut, setting the tone for Australia before she was replaced just after halftime.

Australia’s depth stood the test given captain Liz Watson and her deputy Steph Wood both missed the England series, while the Diamonds also won back the Constellation Cup from New Zealand despite the absence of pregnant star Gretel Bueta.