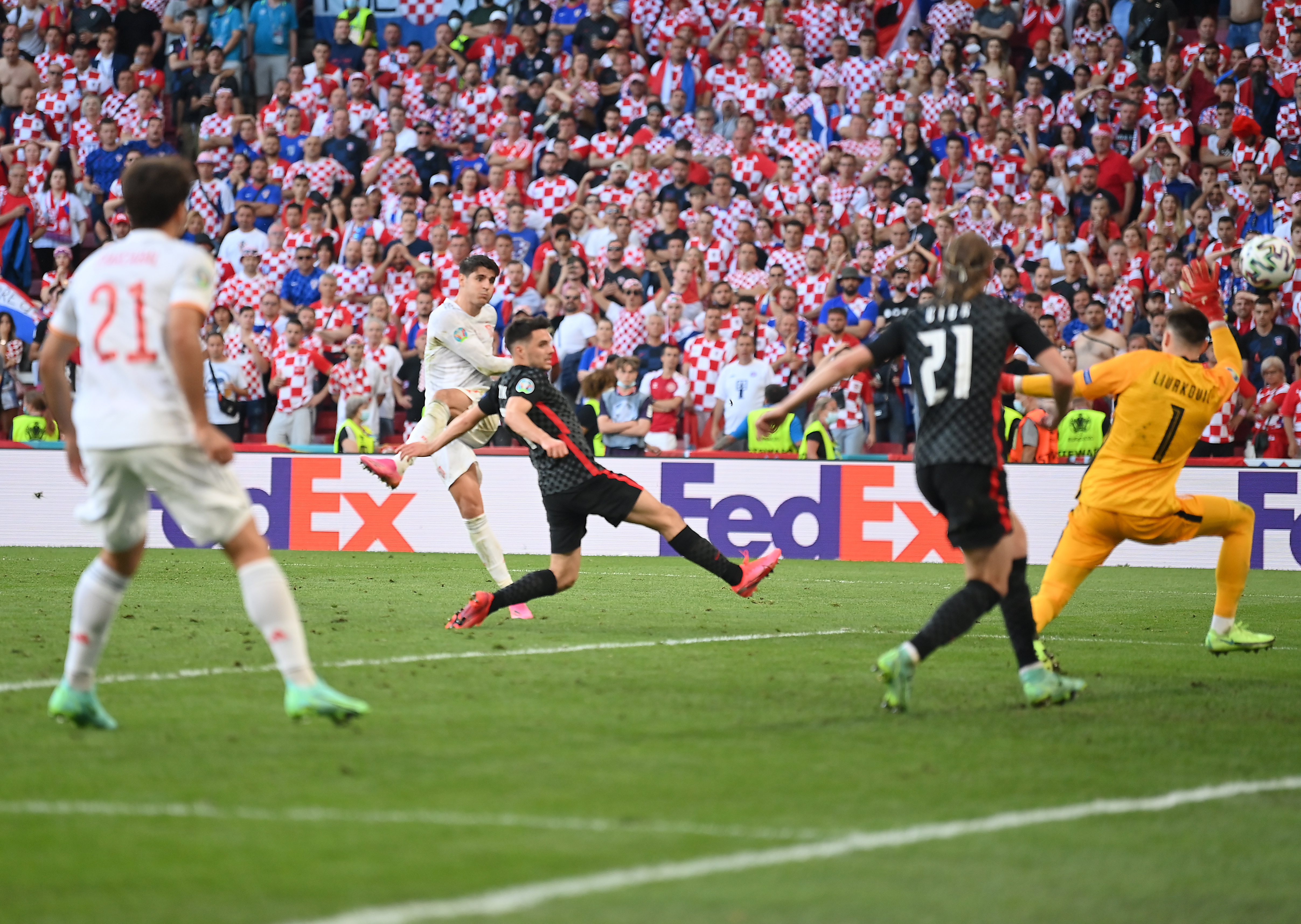 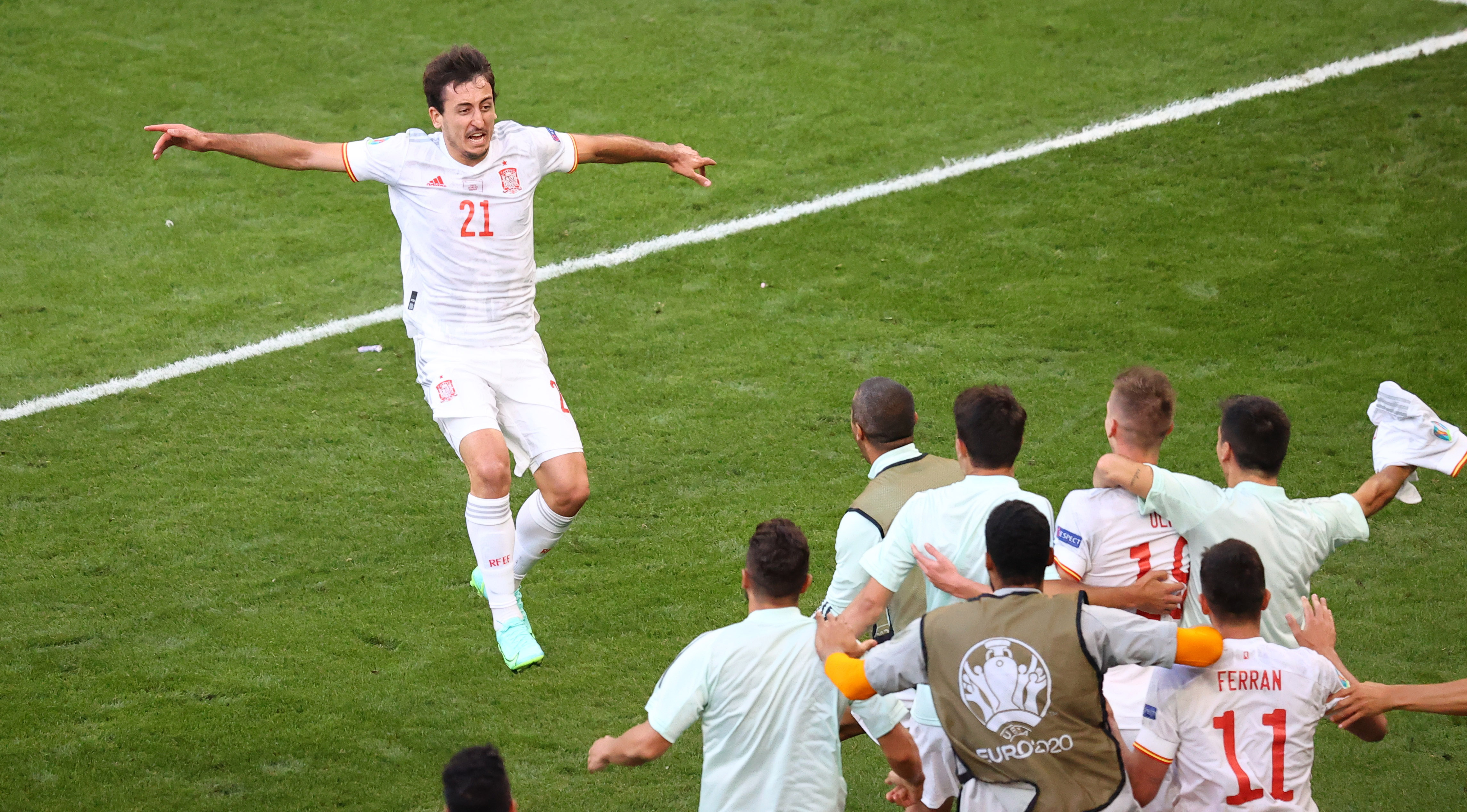 This is what we have been missing – a packed stadium, everything on the line, goals, drama, the lot.

Croatia 3-1 down with five minutes of normal time remaining they forced extra time.

Then Spain picked themselves up to score twice in the first half of extra-time.

One of the greatest games in this tournament’s history had it all.

Including the most bizarre own goal and moments of redemption for both Spain goalkeeper Unai Simon and striker Alvaro Morata.

Sick trolls had sent Morata and his family death threats after his poor form in the group stage.

Luis Enrique kept faith and Morata put them ahead in extra time and helped to set up number five.

A team written off after two draws and just one goal in their opening two games have now hit ten in two.

They are the first team in the tournaments history to score five in successive games… Spain are up and running. 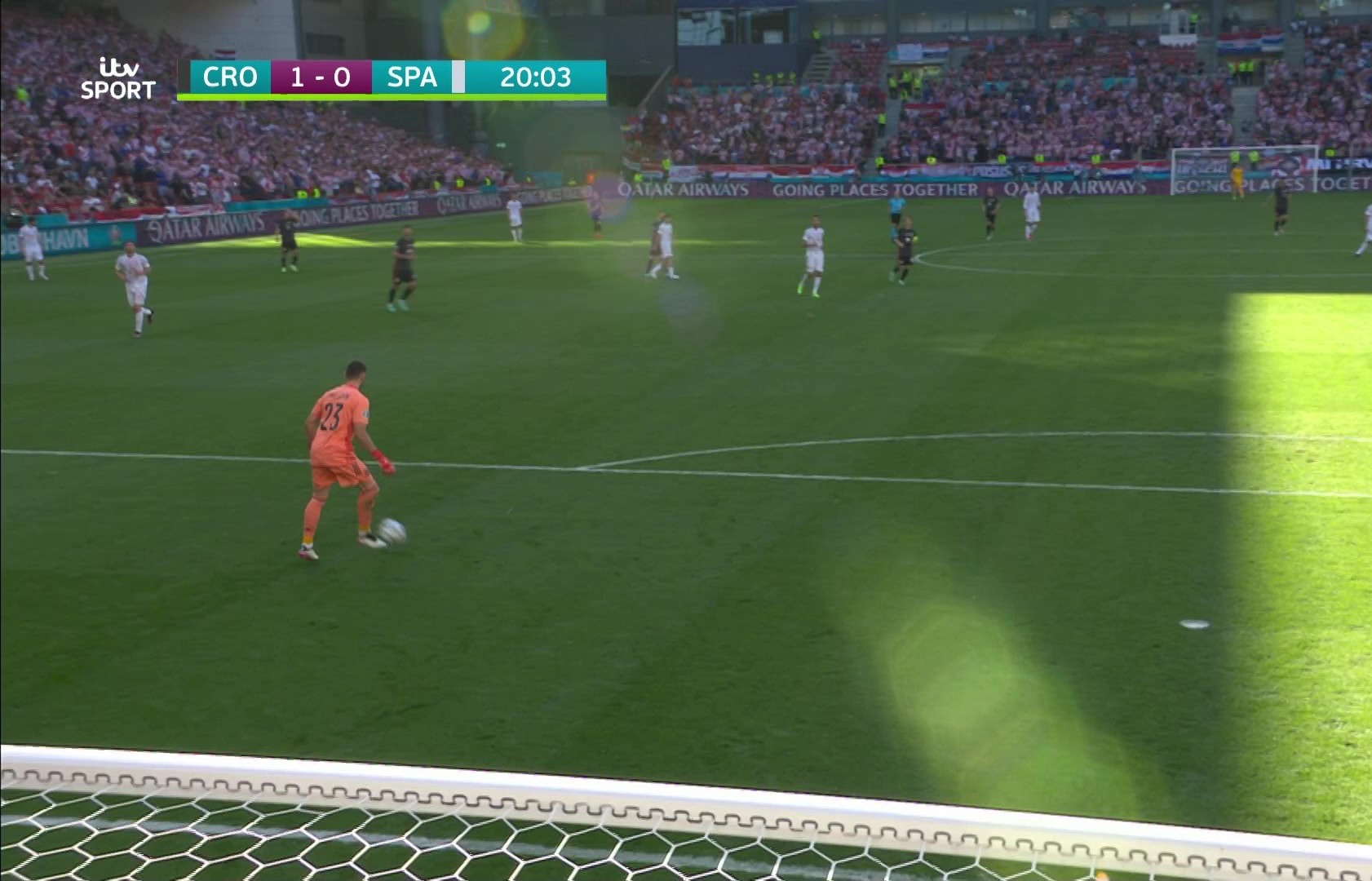 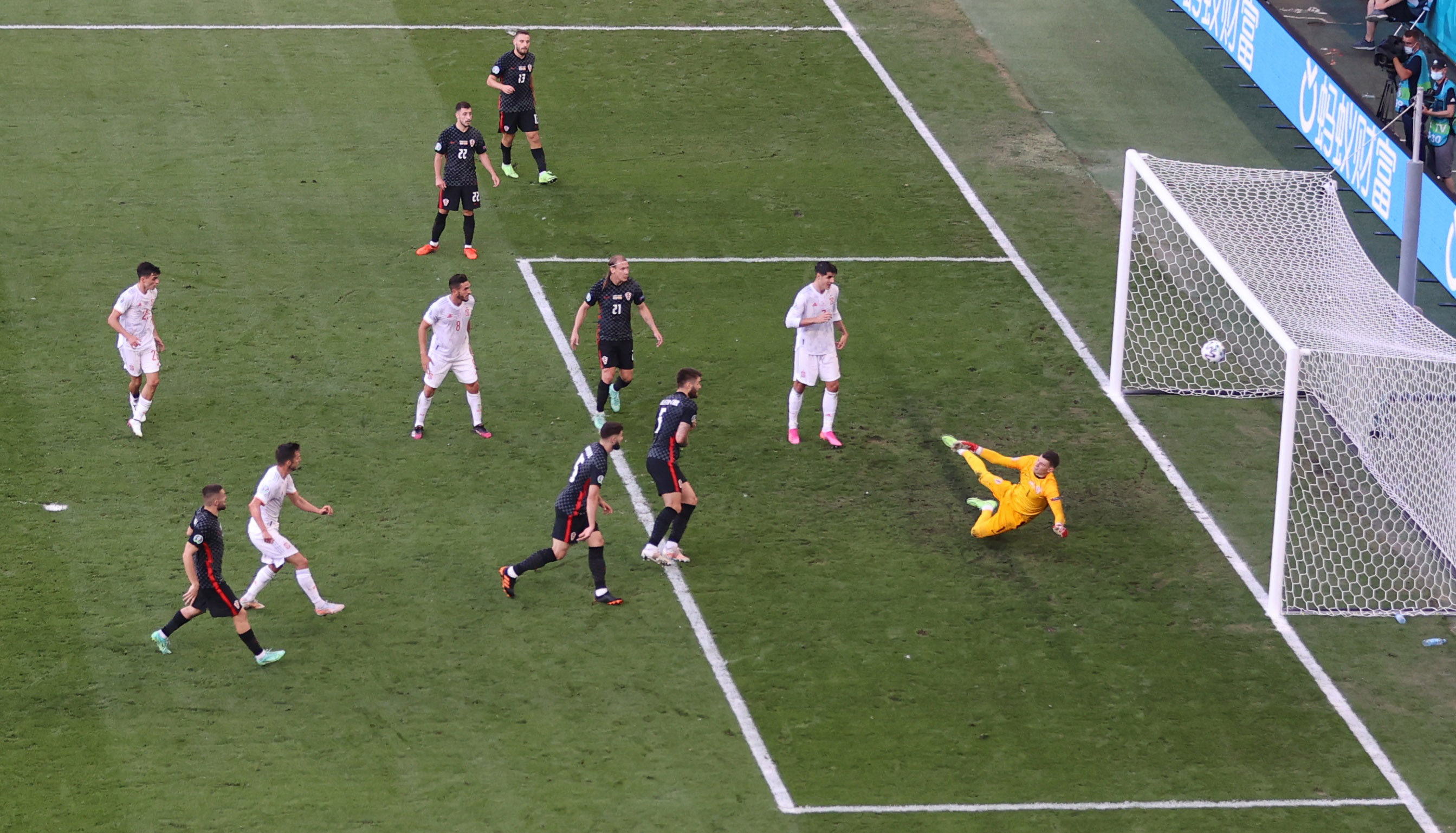 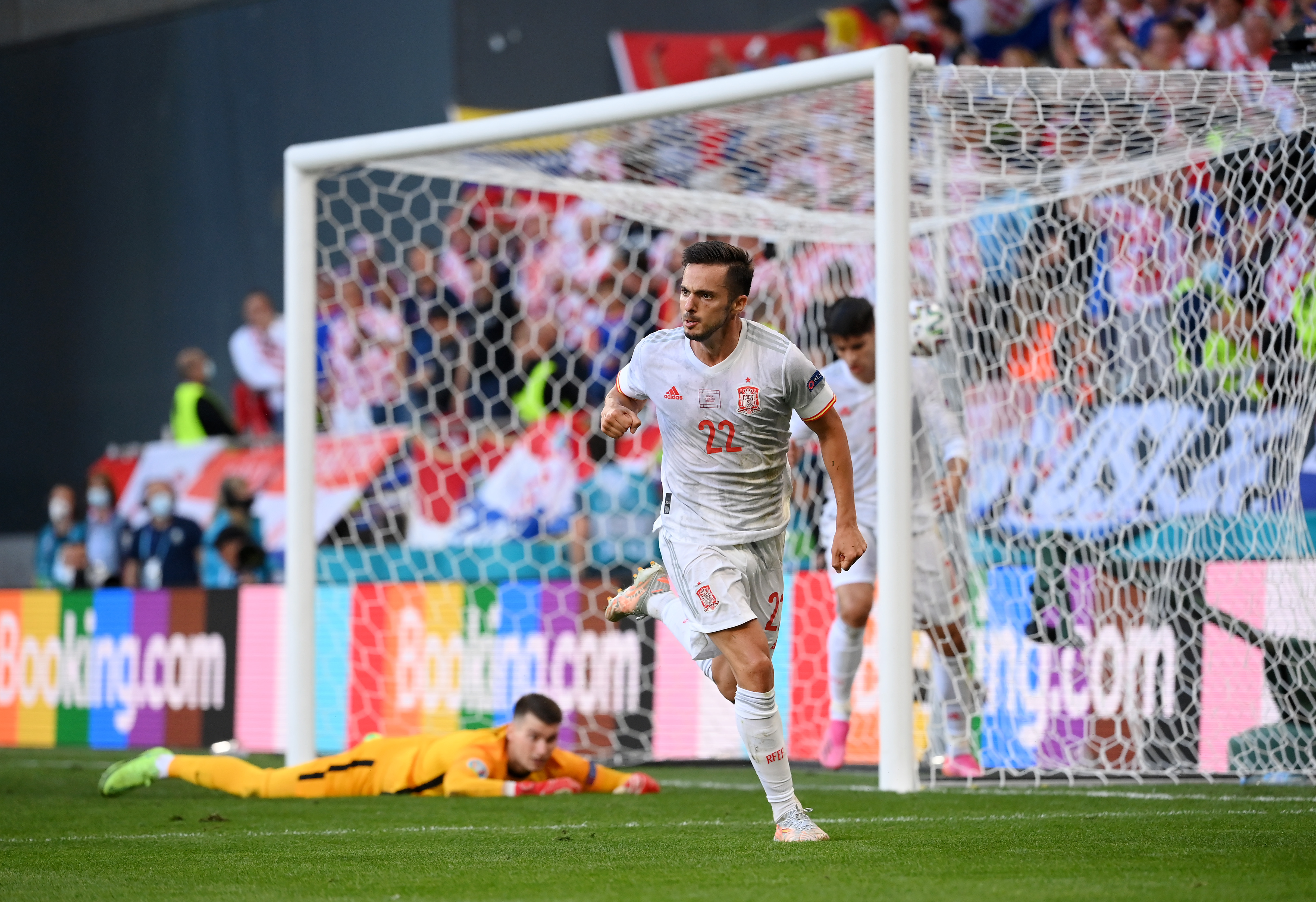 France, Belgium, Italy, England, be aware the 2012 champions are still in town.

On this occasion it was Copenhagan that played host to this epic encounter.

Where to start? Well let’s try at the beginning with a moment after 20 minutes that goalkeeper Simon will be thankful will be forgotten given that everything that then followed.

There are own goals and then there are what we saw here.

Pedri must have been a good 45 yards out when he stabbed a curling ball back to his goalkeeper.

Perhaps there was too much spin on it. Either way your granny would have put her foot on it.

Not Simon however who was clearly thinking about what he was going to do next as the ball nicked off the top of his boot and rolled off into the goal. 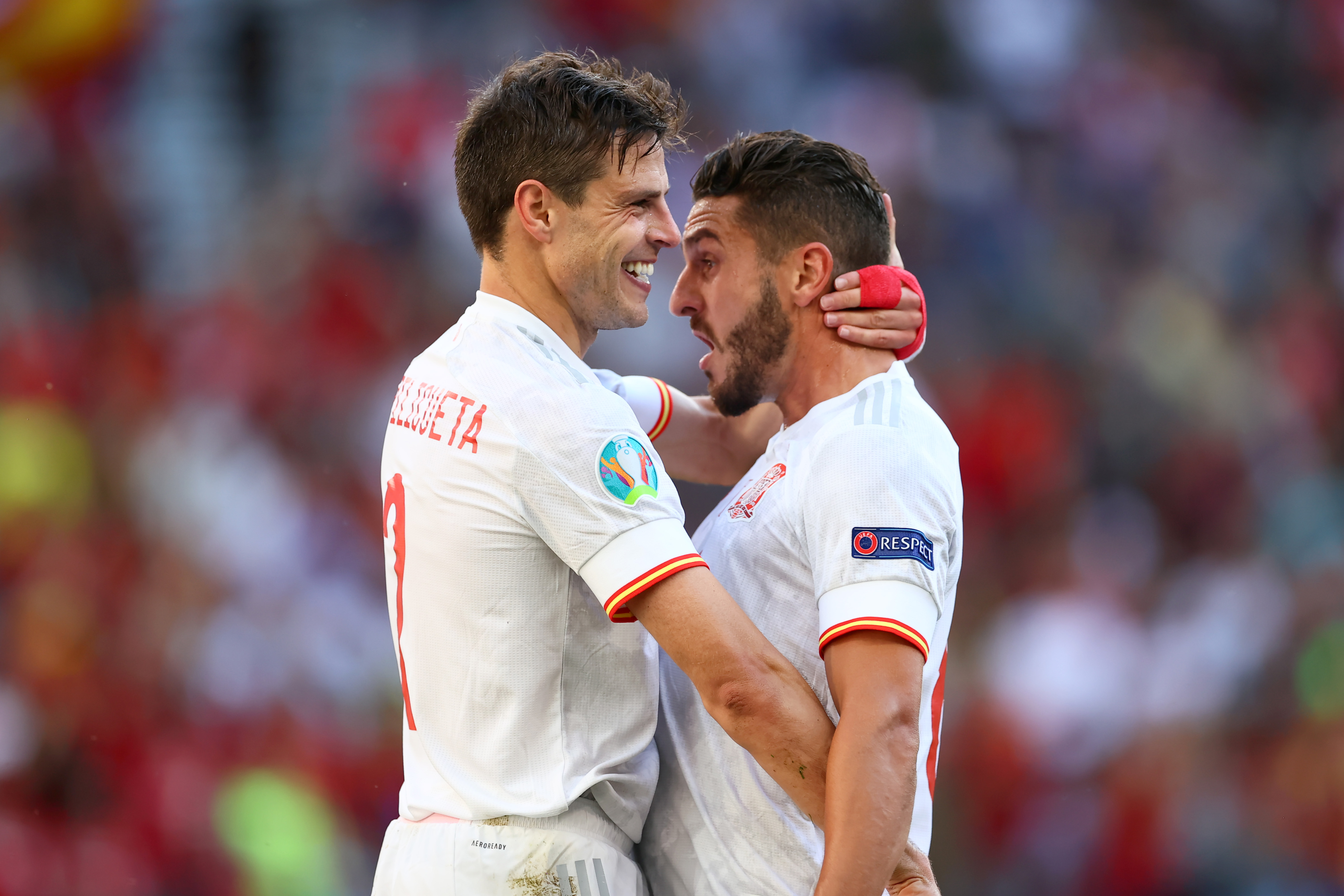 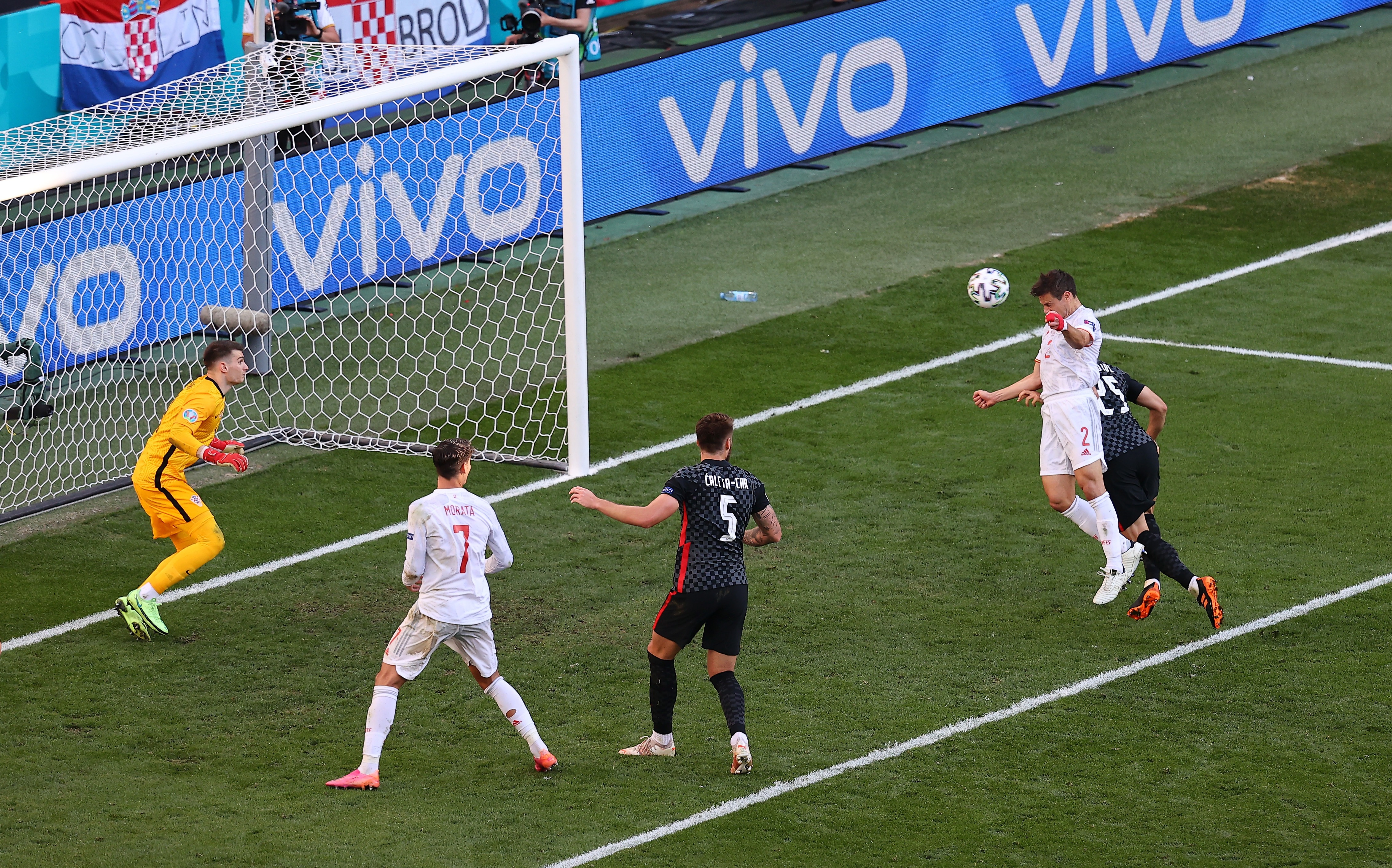 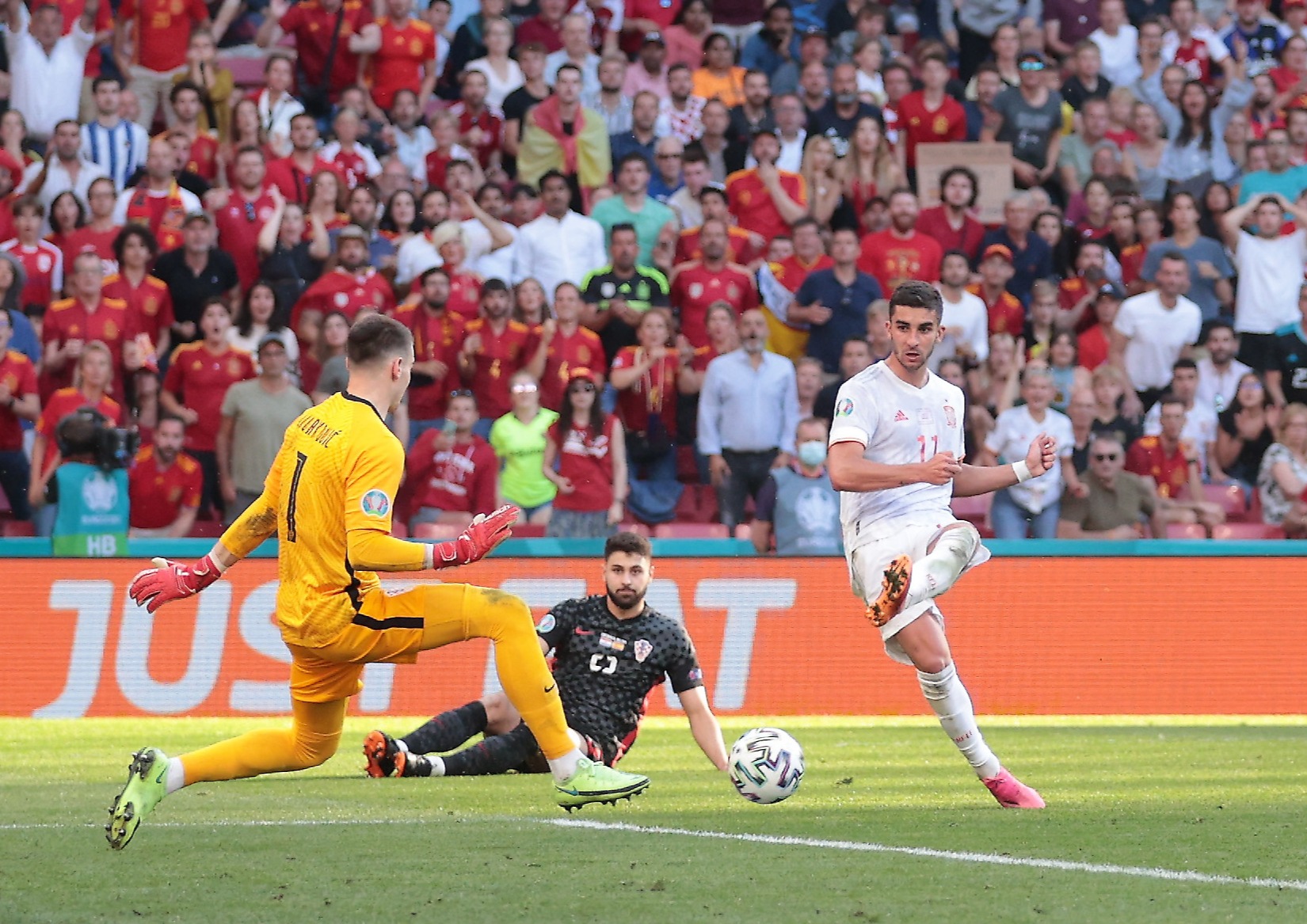 Croatia, who did not have a shot on target all half, were ahead.

Spain should have been in front before that with Koke and Morata wasting good chances but they were level in the 38th minute.

The ball bounced all over the place before persistence paid off as Pablo Sarabia’s shot was saved and Pablo Sarabia side-footed home the follow up.

The three times European Champions deserved to be level at least.

They were ahead on 57 minutes when Ferran Torres whipped the ball in from the left and Chelsea’s Cesar Azpilicueta executed a fine thumping header to take the lead.

Croatia responded with Josko Gvardiol having a shot from close range which was denied by a fine instinctive save from Simon.

Spain went 3-1 ahead thanks to a wonderful goal from Manchester City’s Ferran Torres.

Croatia were asleep as a deep free kick from inside Spain’s half was delivered wide for Torres to take a touch past Josko Gvardi and slide the ball home. 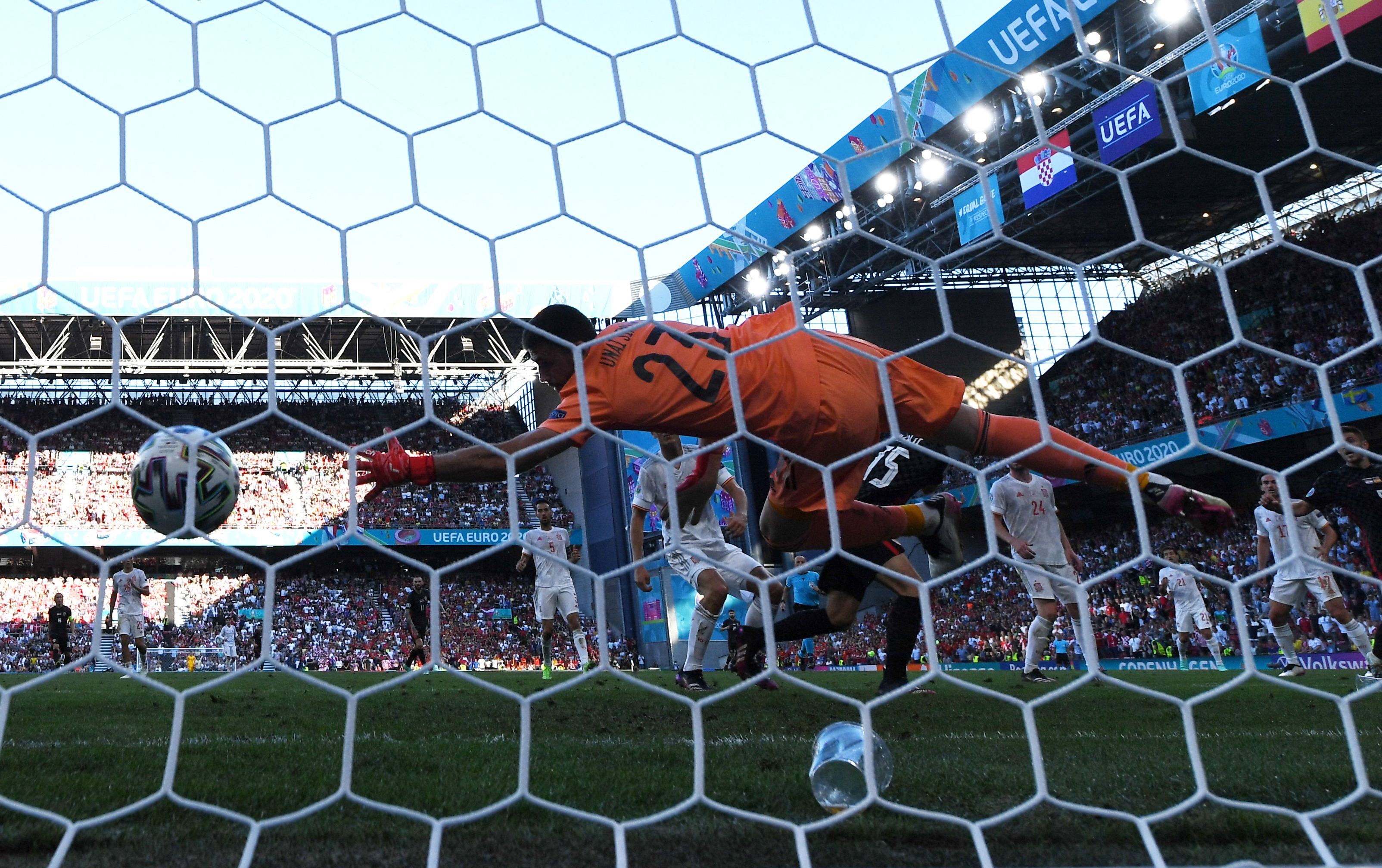 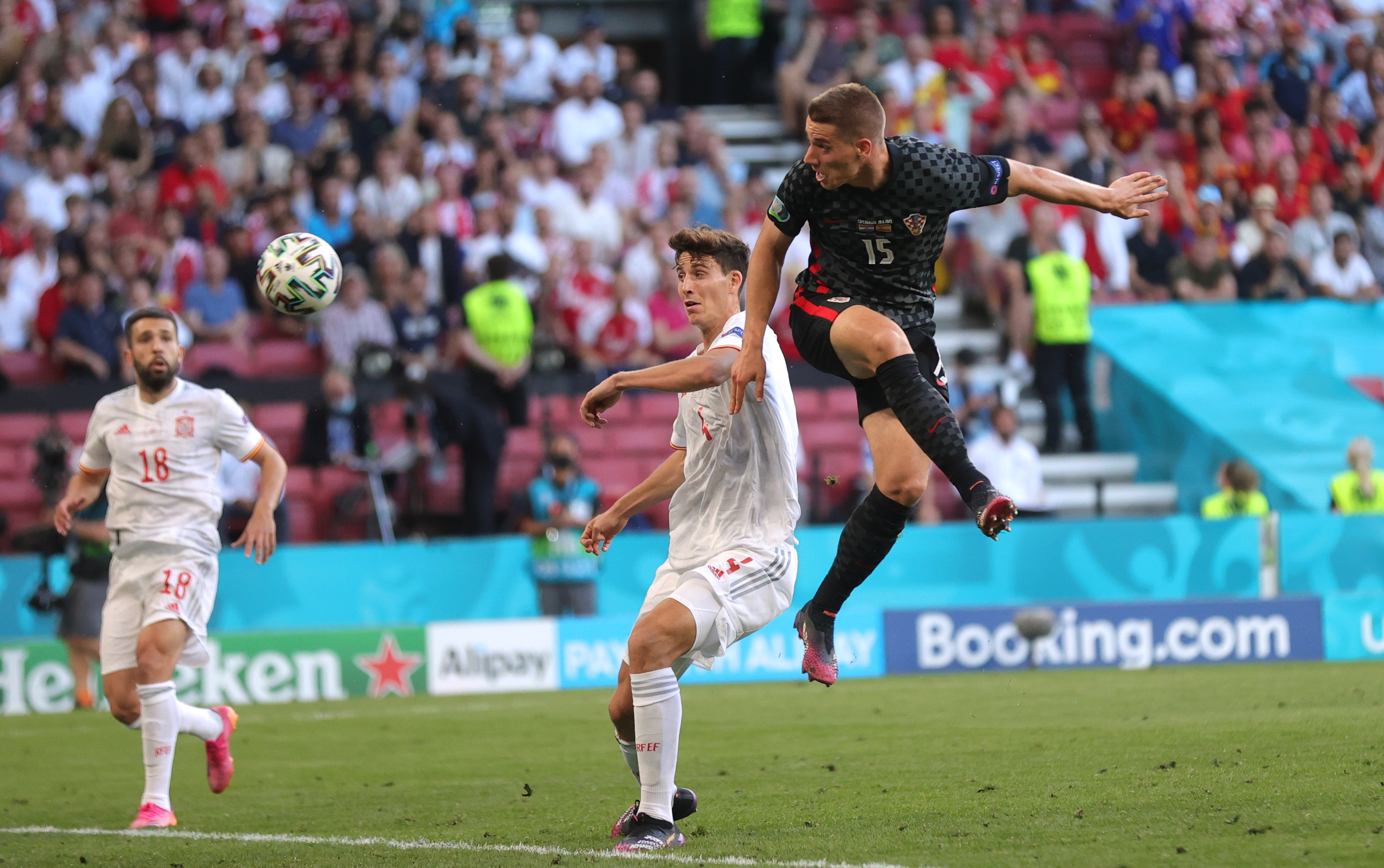 Job done? Nope. Croatia got a goal back on 85 minutes after a six yard box scramble finished with sub Mislav Orsic forcing the ball over the line confirmed by VAR and the ref’s watch.

Then incredibly in the second minute of injury time Mario Pasalic met a left wing cross with a downward header to force extra time.

Spain boss Enrique, who had been celebrating victory just moments earlier, was now slumped in his technical area.

Into extra time we went with Croatia looking to be full of energy.

Andrej Kramaric had a point blank shot superbly saved by Simon, who by now had gone from villain to hero.

Then came Morata’s moment controlling Dani Olmo’s cross with his right foot and firing home a volley with his left.

Dani Olmo supplied the ball to make it five for sub Oyarzabal.

Still then, less than a minute into the second half of extra time Marcelo Brozovic had a great chance to pull one back but put it wide.

Dani Olmo almost made it six with a shot off the post in the final minute of extra time.

You didn’t want this to end. It had to and and Spain finished covered in glory.

It was an absolute classic. The reason why we love football.