Home » Sport » Credit where it’s due: Scotty personified days of betting on the nod

The return Stradbroke meeting to Eagle Farm last Saturday had plus sides but only four rails bookmakers survived where once 20, headed by Brian Ogilvie and Michael Sullivan, satisfied the punting thirst of horse players like John Scott.

It was just another example of how on-course fielders, once a major artery of racing industry revenue and atmosphere, are diminishing.

Now domiciled in Sydney, Sullivan reckons the cashless society is a contributor. 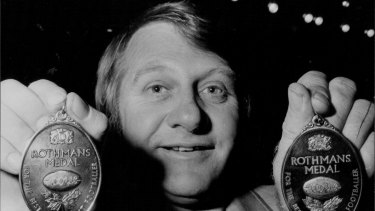 “The younger generation just don’t take money to the races,” he commented.

Of course, betting on the nod – credit, to the uninitiated – was the downfall of Scotty, who died recently. Scotty bet fast and high, the calibre of character going out even faster
than the bookmaker.

Apart from what he generated through bookmakers bags, Scotty, with his entrepreneurial flare, made a considerable contribution to sport in general and racing in particular
through the early days of sponsorship.

Scotty was a promoter in many areas other than the turf, including cycling, football and snooker. Maybe the best came last – The Les Darcy Club at the Lord Dudley,
Woollahra, where his wake will be held next Tuesday.

Yes, he even made money out of Lester Piggott, arguably the world’s best-ever jockey but certainly the most niggardly. Incidentally, a life-sized statue of the champ was unveiled at Epsom recently.

"Lester didn't pay for anything," recalled Scotty, his sponsor, manager, punter and minder in Australia.

“We mapped out an itinerary where Lester would come out to Australia for a month in the early 1980s," he explained.
“I had a personal involvement: he had to have $2000 on everything he rode. That was on the side.

“We went to Eagle Farm. Lester rode five winners. They had a whip-round in the jockeys room for an injured jockey. Mentioned it to Lester and he just did his normal thing, shook his head and said  'Nnnna, nooo'. He stammered. Midway through the program one of the locals said to me: 'You tell that Pommy bastard we'll lock him up in the sauna if he doesn't give something'." Scotty paid.

Despite picking up considerable tabs along the way, Scotty showed a profit on Piggott. In those days, Scotty was a major plunger worldwide, introduced to the Queen in Britain and a drinking mate of Omar Sharif  on the European circuit.

Good days for Scotty, appointed promotions director for Rothmans – Winfield, where he opened the floodgates to become the nation's biggest sponsors of sport.

"My lifestyle led to living beyond my means and a thing called the punt," Scotty said. "It's great having unlimited credit at a department store, but not on the racecourse."

The Lord Dudley is a far cry from Epsom, where Scotty had an audience with Queen Elizabeth.

"It was at the 1983 Derby and with Whispering Ted Lowe [a legend in snooker]. I was walking past the royal box when she called him over," he related.

Apparently, Queen Elizabeth was a fan of Whispering Ted's Pot Black show on television and Lowe introduced his friend to her as "Mr John Scott from Australia".

Folklore insists Scotty would have genuflected with the grace of Sir Walter Raleigh but his money belt at the time prevented any serious bending.