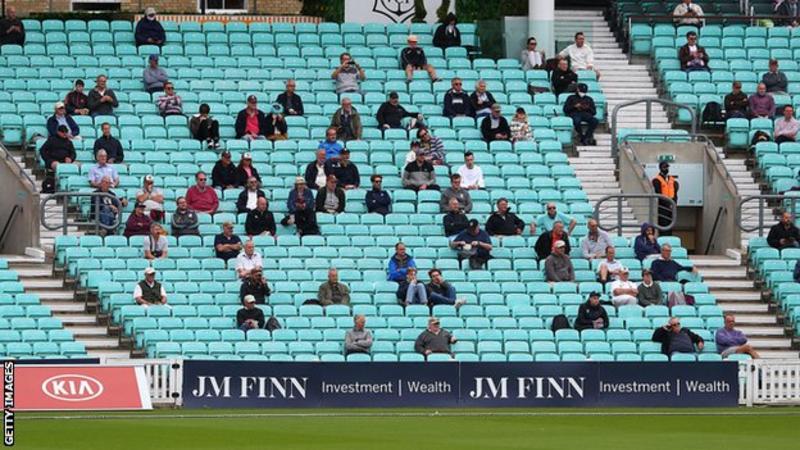 The whole of the next football season in England could be played in front of reduced capacities and crowd sizes could be further impacted if chanting is proven to heighten transmission risk, a senior government adviser has said.

The first pilots for the return of crowds to sporting events in England took place with a cricket friendly at The Oval on Sunday, and additional test events are taking place at Edgbaston, the World Snooker Championships and Glorious Goodwood in the next week.

But Professor James Calder – who has chaired the cross-sport working group with government and health officials on the return to sport – has told BBC Sport that sports events are highly unlikely to have full capacity crowds this year.

“I would be very surprised if we could get full stadia back this year,” he said. “Realistically I think it probably will need a vaccine and also a high take-up rate of that vaccine before we can really see full capacity stadia.”

Asked about whether there was the potential for the entirety of the next football season to be played in front of reduced capacities, he said: “Possible, yep… I think realistically we will be under scrutiny for the next year, certainly this side of Christmas and probably for the rest of the season.”

Professor Calder has worked with the major sports, Public Health England and the Department for Digital, Culture, Media and Sport on the different stages of protocols that have enabled sports to return from the lockdown.

In an interview with BBC Sport, he praised the collaboration between the sports, and said it had meant that the resumption of sport had taken place earlier than expected.

He also revealed that experiments are under way to assess whether droplet spread is increased by chanting and singing, and therefore whether there may be a greater risk of coronavirus transmission.

Professor Calder said: “We need to know, actually, does it matter if you’re shouting, how far will those droplets spread?

“At a football or a rugby match, the fans are going to be shouting and chanting and singing, I hope, and we need to be sure that the people in front of them are as safe as possible.

So if there is an evidential risk, could we see smaller crowds allowed in sports where chanting is more likely?

“Perhaps, I hope that’s not going to be the case,” Professor Calder said. “But I think we need more information on it, and it’s certainly something that we’re conscious of.”

Professor Calder said that it was “far easier” to see women’s sport bounce back faster to nearer a normal capacity than men’s football, because venues are not often sold out.

“We can actually promote these sports far more easily and actually get a fanbase going,” he said. “So I think it’s an opportunity for sports to change the way they are looking at things.”

The England and Wales Cricket Board (ECB) announced on Monday that there will be two further cricket pilots this weekend, with 2,500 spectators allowed to attend each day of the Bob Willis Trophy matches taking place at The Oval and Edgbaston.

Neil Snowball, the ECB’s managing director of county cricket, said: “We’re all excited about the start of the county cricket season, and of course we all miss not being able to go and watch as we normally would.

“These two pilots are an important step in testing the government guidance and ensuring we can safely open our grounds again.”