Home » Sport » Canada, Australia save the Olympic movement from itself

The International Olympic Committee’s second-favourite pastime, besides staging Olympic Games, is minting medals and handing them out. Or maybe third favourite, after nuzzling up to troughs.

With that in mind, and since no medals will be distributed in Tokyo this year, the IOC should immediately strike gold and silver medals and bestow them on Canada and Australia, in that order. Specifically, they should go to the athletes of both countries. 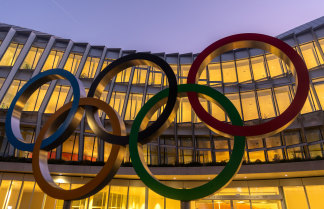 Why? Because they’ve saved the Olympic movement from itself.

It’s been the crappiest year in the lifetimes of anyone born after World War 2, but from its great height, the IOC appeared not to notice, or at least chose not to see. As coronavirus lapped the world, one by one major sports shut up shop until at last only the football codes in Australia remained.

When on successive days the AFL, NRL and A-League withdrew into their bunkers, it made Melbourne today feel like Melbourne in Nevil Shute’s iconic 1957 novel On The Beach: the last place in the world reached by nuclear fall-out.

But still there was the IOC up in its palladium castle, and the Tokyo Olympics. Day by day, as the world closed down, athletes everywhere were finding it harder to identify the facilities, motivation and moral certitude needed to continue to train for and towards the Games. It was all wrong.

Not to the IOC. July 24, said supremo Thomas Bach. Be there, or else. When Tokyo Games board member Haruyuki Takahashi suggested postponement might be best, a short stint in a re-education camp soon set him right. He had been proffering a personal opinion only.

That was two weeks ago. The Australian Olympic Committee continued to issue daily missives about the latest athletes to qualify for Tokyo even as they increasingly seemed to be beside the point. A week ago, the AOC said they were still planning and preparing for Games this year. They had been talking to Bach; their release said so.

Two days ago, when at last Bach admitted to the merest doubt, he said the IOC would give themselves four weeks to think about it, and probably a banquet, too. But the athletes had had enough. First, Canada said they were out, and the sighs of relief echoed around the world. “The best decisions are often the ones we don’t want to make,” said veteran swimmer Brent Hayden.

The same day, the AOC said they were now focusing on 2021. In their release, the voice of the athletes’ commission led by Beijing gold medallist Steve Hooker was plain to hear. Long before, at least one senior AOC official had said they would not be setting their family’s health on the altar of the IOC’s overweening vanity.

Now that the loose thread had been tugged, the gilded Olympic robe quickly unravelled. Country after country sadly shook their heads. Tokyo 2020 had become untenable.

Still, the IOC blustered for two more days. The heart of their intransigence could be summed up in a release from giant business analyst GlobalData’s Sportcal: “COVID-19 forces withdrawal of Canada and Australia from the Olympics, threatening over $10bn worth of media and sponsorship deals.” Lives? None of their business.

At last on Wednesday, the IOC called it off, hiding behind “new advice” from the World Health Organisation. “Human life takes precedence over everything, including the staging of the Games,” said Bach. To the ears of the athletes of Canada and Australia, it must have come across thus: “Follow me, I’m right behind you.”

Bravo, Canada and Australia. Bravo, Kimi Raikkonen and Sebastian Vettel, who by leaving Australia before the Grand Prix two weeks ago as good as called it off when no-one else would. Bravo to footballer Mikel John Obi, who, when the Turkish league chose to press on alone a week ago, refused to play for his team, table-topping Trabzonspor. He could see a moral and medical problem; the IOC could not.

For the IOC and the Tokyo organising committee, the complications are staggering. A new date to begin with, to be negotiated with NBC. Logistics, qualifying, arrangements for the rest of the Olympiad. “A lot of things are going to be made up as we go along,” said CBC’s Jesse Campigotto.

The extra cost is expected to be $US10-$25 billion. Donald Trump is prepared to offer up the lives of a few grandmothers to foot his bills. You’d like to think the IOC isn’t quite so ghastly as Trump but, well, you know.

At any rate, it’s not going to leave their nibs much time to order up their next silver service feast against a snowy Alpine backdrop somewhere, but that doesn’t matter because it wouldn’t be allowed anyway, social distancing and all that. The nabobs routinely ride roughshod over national sovereignty wherever they go, but the laws of nature are not nearly so subservient.

Pelosi announces new committee to investigate Trump’s coronavirus response and to ‘root out waste, fraud and abuse’ – The Sun

CORONATION Street fans are desperate for the soap to give Geoff coronavirus as pay back for abusing Yasmeen. In recent