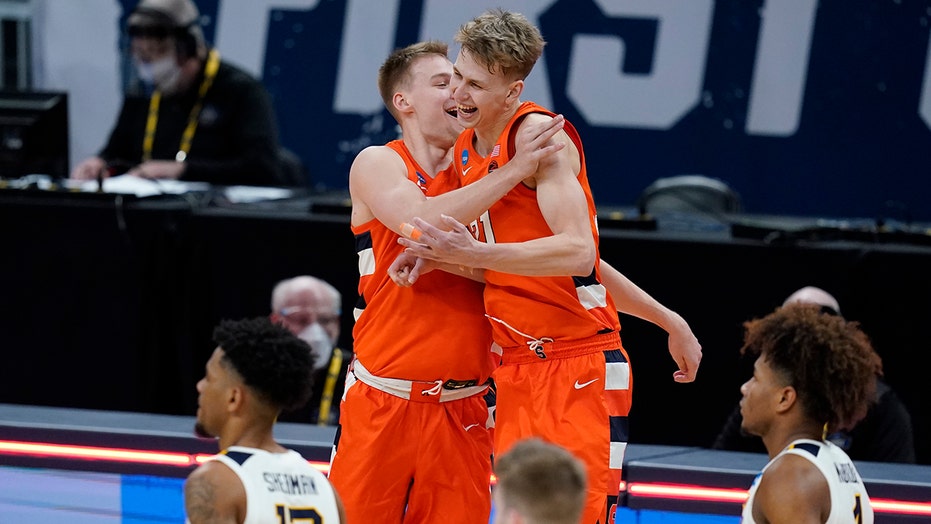 Buddy Boeheim kept shooting, carrying his Hall of Fame father and 11th-seeded Syracuse back into the Sweet 16.

The Orange, a top program for four decades under Jim Boeheim, once again showed they’re just as dangerous as an NCAA Tournament afterthought.

“To win two games and be doubted in both, the underdog, this means everything,” Buddy Boeheim said. “If you were to ask me a month or two months ago where I think we would be, I don’t think I would say Sweet 16, that’s for sure.”

“Buckets” Boeheim scored 22 of his 25 points after halftime to lead the Orange past third-seeded West Virginia 75-72 on Sunday. Syracuse (18-9) advanced to face second-seeded Houston in a Midwest Regional semifinal.

The Orange were a bubble team this year, a familiar spot of late. They won their last two regular-season games and once in the Atlantic Coast Conference Tournament to sneak into the field.

“I mean, he’s just been playing great,” Jim said. “He’s been putting the ball on the floor and getting his own shot. Teammates have been looking for him.

“He had some really good looks today. He was 6 for 13 (on 3-pointers). I’m surprised he wasn’t 10 for 13, really, the way he’s been shooting it. And I know he was disappointed in himself at halftime, but he showed kind of what he’s made of.”

The Orange moved on at the expense of another coaching legend, Bob Huggins, in the second March Madness meeting between coaches with at least 900 Division I victories. Huggins won No. 900 when West Virginia beat Morehead State in the first round on Friday. Boeheim got his 982nd at Huggins’ expense.

Buddy Boeheim made two straight 3s just after halftime. His jumper and 3 on consecutive possessions put Syracuse ahead 63-59 with 4:55 left, and he helped put the game away with three late free throws.

After his quiet first half, Boeheim got a pep talk from former Orange sharpshooter Gerry McNamara, who won the 2003 national championship as Carmelo Anthony’s wingman and is now one of Jim Boeheim’s assistants.

“G-Mac just came up to me at halftime and said, ‘Keep going. I don’t care if you miss 200. Just keep shooting,’” Boeheim said. “I just said, all right, if I get clean looks, I’m going to have to take them and I’m going to start making them.”

Sean McNeil scored 23 points to lead the Mountaineers (19-10), who last made the Sweet 16 in 2018. That was the fifth time West Virginia got that far under Huggins, who also made the regional semis four times with Cincinnati.

WVU trailed 74-72 with 4 seconds left before Boeheim was fouled at midcourt on an inbounds pass. He made one free throw and missed the second, but Miles McBride traveled after grabbing the rebound.

The Mountaineers dug an early hole and briefly took the lead back in the second half. But Boeheim kept answering with big shots.

“They shot it extremely well,” Huggins said. “It seemed like everything they shot went in, and they shot from deep. We wanted to make them bounce it and we let them get too many step-in shots.”

Joe Girard scored all 12 of his points before halftime, steadying the Orange while Boeheim struggled. Quincy Guerrier and Marek Dolezaj also scored 12 each for Syracuse.

Syracuse: The Orange are the bubble team nobody wants to play. They have advanced to the Sweet 16 each time they’ve been given a double-digit seeding, reaching the Final Four as a 10 in 2016 and the Sweet 16 as an 11 in 2018. That more recent run ended when Jim Boeheim’s bunch lost to Duke and Mike Krzyzewski, the only previous tourney game between 900-win coaches. Syracuse lost in the first round two years ago when Buddy Boeheim was a freshman role player.

West Virginia: Like many Syracuse opponents, the Mountaineers struggled against the 2-3 zone with poor shooting (37.1%) and turnovers (14). They regrouped, but couldn’t get over the hump.