Olympic team announcements are supposed to be occasions of pure joy for those lucky enough to be selected. But for the Australian women’s sevens team, it was tinged with sadness.

With COVID-19 causing disruption throughout the country in the past month, the side was stuck in Townsville for longer than expected following the Oceania rugby sevens tournament in June.

It meant the entire side was together as shock omissions were announced.

The squad was originally supposed to be named when the team had returned to Sydney.

Ahead of their flight to Tokyo on Monday, Olympic gold medallist Charlotte Caslick has described the situation as “heartbreaking”.

“We were meant to be in Sydney and then we were planning on going back up to Darwin after it had been announced, but it all got changed with what’s going in Sydney,” she said.

“It was just a bit awkward as we didn’t want to make a big deal about it all for the other girls.”

For Caslick, her biggest priority was long-time teammate and friend Ellia Green.

Green was the biggest name to miss selection in the Olympics squad. The news was so unexpected, the 28-year-old had to clarify on social media that she wasn’t injured, just not selected.

The gold medallist has been a try-scoring machine and a fan favourite for Australia for the better part of a decade.

Head coach John Manenti labelled the decision the toughest of his career.

“It was just heartbreaking for us to see her not be selected,” Caslick said. “We’ve been playing together for so long and I would have loved her to be there, but it’s not up to me. You have to trust in what the coaches decide to do, but rugby has been a huge part of Ellia’s life.” 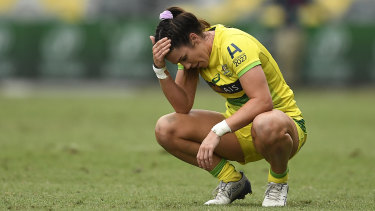 The side is poised to win a medal in Tokyo but has struggled to match New Zealand in recent competitions.

After the Tokyo Games were postponed in 2020 and the women’s sevens world series was cancelled, a number of women’s sevens players joined NRLW teams.

Caslick warned we would not see as many rugby players swap codes to the NRLW this year due to upcoming major tournaments.

“I would say a lot of girls who haven’t been selected – not sure what they’re all planning – but we’ve got a Commonwealth Games and World Cup next year, and I’m sure a lot of them have shifted their focus over to that,” she said.

“Maybe a few of the older girls may be weighing up the options of playing.”

Caslick said the growth of the NRLW, which will see an increase from four to six clubs this year, was exciting to watch.

“I love being able to see women succeeding in sport so I am stoked that the competition is growing and growing,” she said.

“It’s great to keep the market competitive. It’s always good for us to have an option in terms of trying to capitalise on our careers as much as we can.”

Caslick will speak more about her Tokyo preparation on the ASICS podcast Sound Mind Sound Body Stories, available on July 20.

Sports news, results and expert commentary. Sign up for our Sport newsletter.