Home » Sport » At the U.S. Open, Sam Snead Was Often a Bridesmaid

Phil Mickelson will try again this week at Pebble Beach for that elusive United States Open title, which would give him the Career Grand Slam.

His near misses, including Pinehurst in 1999, Winged Foot in 2006 and Merion in 2013, have been well chronicled. He has finished second a record six times.

There was also the heartbreak of 1939.

That year, on the Spring Mill course of the Philadelphia Country Club, Snead, known for his beautiful swing, was apparently leading by a shot going into the final hole, a par 5. Make a 5, and he would most likely be the champion.

Only Snead believed that he needed a birdie. There were no scoreboards then. So after hooking his drive into the rough, he pulled out a two-wood instead of laying up in the fairway.

The ball came to rest in a bunker about 110 yards from the green. Now he had cause for concern. He went with an eight-iron and ended up by some freshly laid sod near the bunker’s lip. His next shot found another bunker.

He went on to record a triple-bogey 8 to finish fifth, two strokes behind Byron Nelson, Denny Shute and Craig Wood; Nelson would prevail in a playoff.

“That night, I was ready to go out with a gun and pay somebody to shoot me,” he said in his book, “Slammin’ Sam.” “It weighed on my mind so much that I dropped 10 pounds, lost more hair and began to choke up even on practice rounds.”

Fast-forward to the 1947 Open and St. Louis Country Club.

With a birdie on the 72nd hole, Snead forced an 18-hole playoff the next day with Lew Worsham. The two were still tied as they reached the final hole.

Snead, facing a birdie putt for the win, left the ball about 30 inches short. He walked toward his ball to knock it in for a par. 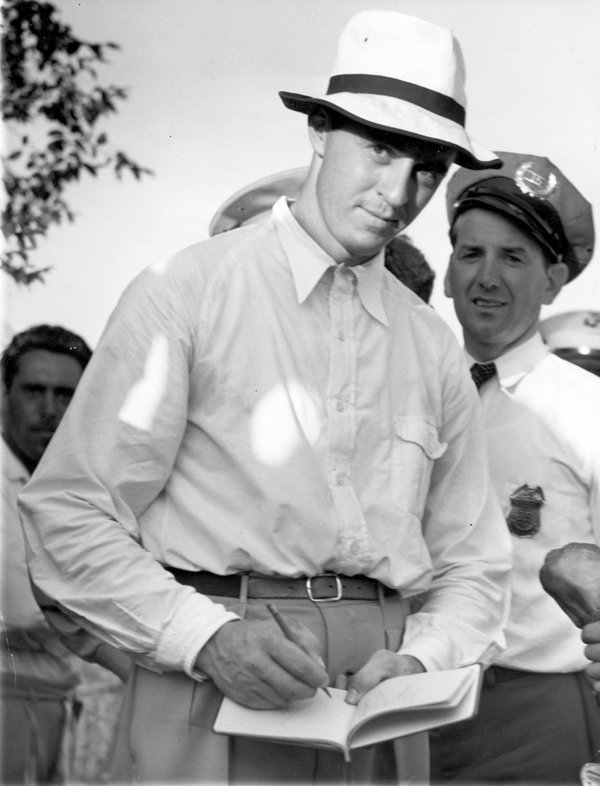 Worsham, also with a short attempt for par, asked Ike Grainger of the United States Golf Association to determine who should go first, which Grainger did with a measuring tape.

Snead was not thrilled.

“You could see the steam coming out of Sam,” said James Dodson, the author of “American Triumvirate,” a book about Snead, Nelson and Ben Hogan, referring to a photo from that day. “He is standing there, the putter by his side, with this impatient stare that says, ‘This is absolutely a sin against nature.’”

Once Grainger decided that Snead was an inch farther away than Worsham, Snead went first, but missed the putt. Worsham sank his putt for the victory.

As upset as he was over the delay, Snead, according to a friend, Jack Vardaman, took responsibility. “He said, ‘I missed the putt.’”

As for his two second-place finishes after St. Louis, Snead lost by a shot to Cary Middlecoff in 1949 and, in 1953, trailed Hogan by one heading into the final round, but shot a 76 to lose by six. In 1937, Ralph Guldahl defeated him by two.

So does Snead’s inability to win the Open affect how high he should rank among the game’s best? Curtis Strange, who won the Open in 1988 and 1989, said it did.

Snead’s name has come up a lot recently because Tiger Woods, with his win at the Masters, has 81 tour victories, one shy of Snead’s record. Of his 82 wins, seven were majors.

“It’s made Sam relevant again,” said Strange, who idolized him growing up. “And making Sam relevant has taught the younger generation how great he really was.”

Snead, who died in 2002 at age 89, was fatalistic about his Open failures, Vardaman said.

The scars maybe never fully healed. Dodson was playing golf with Snead in the early 1990s when he asked if the Open losses hurt him a lot.

“He just stopped,” Dodson said, “and looked at me and said, ‘What do you think?’”