PARIS — They have been on often-parallel tracks for two decades and as they close in on the big four-oh, Serena Williams and Roger Federer still cannot break the habit.

Both are ranked eighth in the world at age 39 after playing very little so far this year. Both are back at the French Open trying to keep their minds from racing ahead to Wimbledon, even if both have to know their chances are better on the well-manicured lawns of the All England Club in London than on the gritty red clay of Roland Garros where younger set can grind them down.

Federer has conceded that he is not going to win it all in Paris, even if he will not be easy to beat. Williams has conceded nothing of the sort and while Federer took a break on Wednesday on the eve of his second-round match with Marin Cilic, Williams fought hard on Court Philippe-Chatrier.

Her opponent was Mihăela Buzarnescu, a 33-year-old lefthander from Romania with a Ph.D. in sports science and a ranking of 174 that does not do justice to her talent or her ability to conjure winners from unexpected places. She was ranked as high as 20th in 2018 before injuries and shoulder surgery knocked her down.

Williams controlled the play in the opening set, lost command in the second and then reclaimed full possession of the steering wheel in the third: roaring, shrieking, smiling but never not caring.

There was ample cause for concern. She is not yet at her fittest, not close to her finest. Court coverage is a challenge: she suffered in the longer rallies on Wednesday. So are changes of direction and consistency. But she has looked better in both her matches in Paris than she looked in her matches in Rome or Parma, Italy, last month, where she lost early in both clay-court tournaments in her return to competition after a three-month break.

“When she played Rome and Parma, I told her that she was not at all ready,” said her coach Patrick Mouratoglou. “The results did not surprise me because she was not prepared, and I told her that when you are not prepared, it is better to train than to compete. But after Parma we had 10 days, and we did the best we could in those 10 days. I think she’s much better now than she was in Italy, but I still cannot say she is as ready as she was in Australia.”

At this year’s Australian Open in February, she looked particularly fit and focused before a deflating and unexpectedly lopsided 6-3, 6-4 defeat to Naomi Osaka in the semifinals.

“All tournament long in Australia, Serena had a very high level,” Mouratoglou said. “The only match she let pass her by was the match against Osaka. But here in Paris she is suffering and anyone who thinks she wasn’t suffering today was not watching the match.”

Very few were watching in person. Pandemic-related restrictions have limited daily crowds at Roland Garros to just over 5,000 spectators, and only a few hundred were seated in the Chatrier Court as Williams and Buzarnescu faced off for the first time in their careers.

When Federer won on the same court on Monday in the late afternoon, the sun was shining, the shadows on the red clay sharply defined as the photographers snapped away from the otherwise-empty top tier. 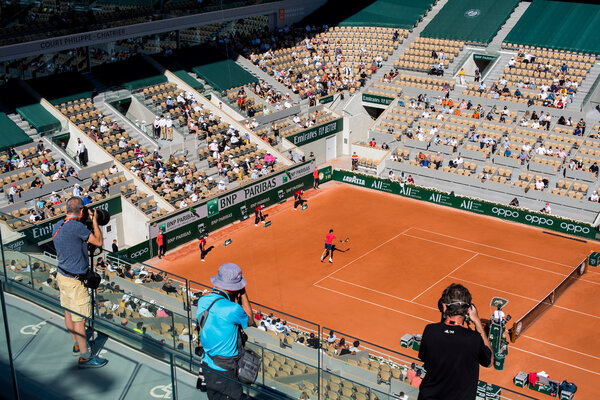 It felt theatrical, like a play, in that the ending seemed to have been written in advance. Federer’s opponent, the veteran qualifier Denis Istomin, was more foil than threat, providing Federer with all manner of big opportunities to express his beautiful game.

“I sensed quickly that I could win the points a lot of different ways,” he said of his 6-2, 6-4, 6-3 victory. “Then you can enjoy it: come to net, serve and volley, drop shots, take risks. You could really choose everything, so I think this opponent was ideal for the first round.”

It was the movement that dazzled. Federer cannot be as quick as he was, not at 39 and after three knee operations: the most recent two coming in 2020, both on his right knee, and keeping him off the tour until March of this year.

But his innate sense of anticipation and fluidity remain: the ability to get around the ball nimbly enough to slap that inside-out forehand, the ability to glide forward (or backward) and win pretty. That is no guarantee that the gears won’t start grinding and the mishits won’t start piling up on Thursday against Cilic, the 2014 United States Open champion who lost to Federer in the 2018 Wimbledon final and the 2019 Australian Open final before falling back in the rankings.

But there was no genuine suspense against Istomin, a player with a triple-digit ranking whom Federer had beaten in all seven of their previous matches.

“It was nice to play someone I already knew, and it will be nice to play Marin again for the same reason,” Federer said, perhaps happy to see familiar faces as he returns after an extended break with nearly all of his peers long retired.

They have such different styles: Federer the self-contained fencer; Williams the fiery boxer. But they share the essential at this advanced stage.

“If you don’t have the flame burning in you, you just cannot compete at this level,” Mouratoglou said. “They express it in different ways, but it’s still burning for both of them. And though it’s harder for me to speak about Roger than Serena, they both must feel capable of still winning Grand Slams. Otherwise they wouldn’t still be out here. Of that much I am certain.”