Every college program in America is trying to keep the coronavirus away. But not all of them are being guided by a staff member who has lived through it.

But the head coach wore a mask up to his eyes, looking like a Halloween mummy. Equipment managers sprayed inanimate objects with a disinfectant from a Ghostbusters-style backpack. And the afternoon shadows spread early, as they do in October, usually the middle of the season.

Scurrying among the players, coaches and support staff — their numbers limited by state and local health officials — was a 47-year-old named Andrew McGraw. He wore shorts and a touch of gray in his hair.

McGraw has spent 24 years with the Cal football program. As director of football administration, he oversees its day-to-day operations. His most important role this fall is to keep the coronavirus away from the team. 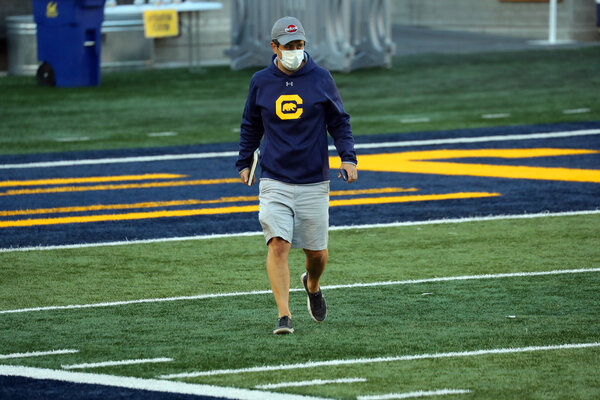 It is a personal mission. McGraw is a Covid-19 survivor. He was laid up, miserably, for two weeks this summer. Four months later, he says he still feels fatigued. His sense of smell is 60 or 70 percent of what it was.

He sees himself as a cautionary tale for college athletes.

“This is no joke,” McGraw said. “For those who are hearing that it’s a hoax, you almost want to shake them by the neck.”

Cal is part of the Pac-12 Conference, the last of the big-time leagues to rev up its football season. It is where The New York Times has been embedded this summer and fall, to chronicle the challenges of running major college athletic programs during a pandemic.

The Pac-12 hopes to play a seven-game season in November and December. Nothing is certain. Among the nearly eight million coronavirus cases and 215,000 deaths in the United States, colleges and universities account for at least 178,000 infections and 70 deaths, according to a New York Times analysis. Outbreaks have postponed several college football games and sidelined entire teams, leaving colleges scrambling to patch together their seasons.