SUPPORTERS arriving in Baku for the Europa League final checked-in to hotels from hell with disgusting facilities.

Thousands have made the long, arduous trip to Azerbaijan to watch Arsenal's clash with London rivals Chelsea.

The whole build-up to the final has been a complete farce including Henrikh Mkhitaryan's decision to pullout over safety fears.

Supporters have also been asked to fork out thousands for a nightmare journey with no direct flights from the capital.

And those who braved the route were left furious upon arrival at their hotel.

One supporter took to Twitter to vent their frustrations after comparing apparent pictures from the hotel website to what they were greeted with.

It shows a large, clean tub and shower facilities when in reality it is a tiny bathroom with a smashed sink and a shower head dangling over the tap.

Mould also covers the pipes while the floor is covered in filth.

They wrote on social media: "Booked accommodation in Baku, the first two photos were of the bathroom on the website.

"The last photo is what we have been met with. Have you ever seen anything more Europa League?"

Another supporter shared his nightmare story upon arrival. 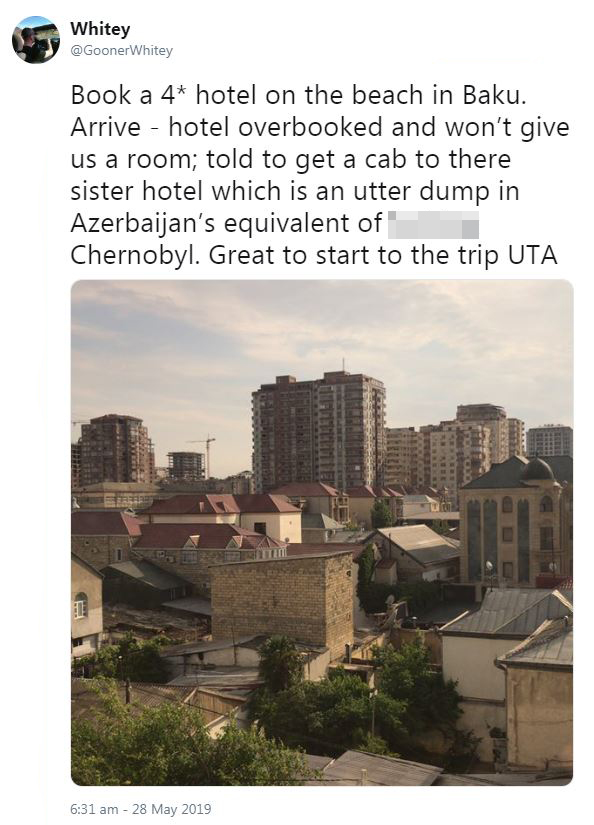 He said: "Book a 4* hotel on the beach in Baku. Arrive – hotel overbooked and won't give us a room; told to get a cab to their sister hotel which is an utter dump in Azerbaijan's equivalent of Chernobyl."

A third added: "Did anybody get the room they actually booked in Baku? Absolute joke the amount of hotels that cancelled last minute or are complete s***holes."

Journalist Luke Edwards claimed: "Oh and great, my hotel has not got a room for me, despite me ringing to double check they had one.

"Farcical. No sleep, told nothing they can do. Won't have one until 2pm which is seven and a half hours time."

Due to the rising political tensions between Armenia and Azerbaijan, Mkhitaryan opted to stay at home, with Gunners chief Vinai Venkatesham slamming Uefa over the situation.

Arsenal had planned to show their support for the ex-Manchester United ace by wearing t-shirts with his name on in a show of solidarity.

But Uefa have blocked the North Londoners from paying a tribute to Mkhitaryan during their warm-up on Wednesday.

The two supporters were eventually allowed on their way after one of the officers spoke on his walky-talky.