Toronto Raptors forward Yuta Watanabe ended up on the wrong end of a viral moment when Minnesota Timberwolves guard Anthony Edwards dunked on him during a game in February.

Photos and videos of Watanabe hopelessly coming up short in his attempt to stop the dunk made their way across social media, including the Instagram feed of the actor and basketball fan Kevin Hart, who shared a photo of the dunk with his 100-million-plus followers, saying: “This defender has to be thrown out of the league immediately….there’s no coming back from this.”

But Watanabe is still here, and in his third N.B.A. season he has captured the imagination of basketball fans in Japan, his home country, while earning a rotation spot with the Raptors.

Takeshi Shibata is the manager of basketball business for Nippon Bunka Publishing and has been a writer and editor with the company in Tokyo since 2010. A Tokyo native, he grew up watching the Showtime Lakers on satellite television in the 1980s, learning English by listening to the famed play-by-play announcer Chick Hearn.

This season, he is one of the dozens of Japanese reporters covering Watanabe, whom he has followed since Watanabe was in high school playing for Jinsei Gakuen in the Kagawa Prefecture in Japan.

“What I saw was an unbelievably athletic player,” Shibata said. “He was a man of energy, a man of effort.” 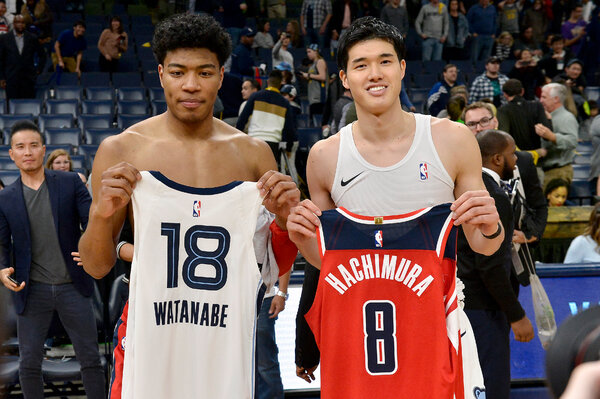 Watanabe has the best-selling N.B.A. jersey in Japan this season, ahead of Golden State’s Stephen Curry, the Los Angeles Lakers’ LeBron James and Rui Hachimura, the Washington Wizards forward who in 2019 became the first Japanese player ever drafted in the first round.

Hachimura has more name recognition and better odds of becoming a star in the league, but Watanabe’s story — going undrafted in 2018 after four seasons at George Washington University, then signing a two-way contract with the Memphis Grizzlies — has appealed to a large audience in Japan.

“He took more of a humble path,” said Ed Odeven, who grew up in the Bronx and has covered basketball in Japan since moving there in 2006. “The Japanese culture places a value on sticking with it and working hard to reach your goals. They see that in Yuta, and it resonates with them.”

The pandemic curtailed Shibata’s plans to travel to Toronto — where he honeymooned with his wife, Ayako, in 1994 — to cover Watanabe in person this season. Instead, he wakes up at 5 a.m. and covers the Raptors from his home in Chiba, Japan, publishing up to four basketball stories daily on the company’s website. (The Raptors aren’t in Toronto, either; because of Canada’s health restrictions, they have spent the season in Tampa, Fla.)

Shibata appreciates the flexibility of working from home, and has developed a rapport with Toronto Coach Nick Nurse, who has answered questions from Japanese reporters at the end of his virtual news conferences.

“I enjoy talking to him and getting responses from him,” Shibata said. “He knows my English is shaky, and I’m trying my best to communicate with him. He’s been really inclusive to someone like me.”

Through Toronto’s first 66 games, Watanabe has appeared in 47 and is averaging 4.2 points in 14.2 minutes.

“I’m pretty sure I could come up with a good story even if Yuta played five seconds on the court,” he said. “Because every second means a lot to the basketball fans in Japan.”

Shibata was hired by Nippon Bunka Publishing in 1992 as an advertising associate at what he believed was the start of a golden era of basketball in Japan.

He joined the company shortly after watching Michael Jordan and the Dream Team at the 1992 Summer Olympics in Barcelona, which ignited interest in the game globally. That coincided with the publication of a popular Japanese basketball manga written and illustrated by Takehiko Inoue and named “Slam Dunk.” It ran from 1990 to 1996, sold over 120 million copies in Japan and helped inspire millions of children — including Hachimura and Watanabe — to play the game.

“There’s been so many roadblocks along the way,” Shibata said.

Things have started to change in the past several years. The FIBA ban was lifted in 2015. The B. League — a new local pro league featuring 47 teams across three divisions — launched in 2016 and has been a success through the first five years, attracting local fans and major sponsors.

Hachimura and Watanabe have inspired a new generation not only to watch the game, but also to see themselves playing at the highest level. (Yuta Tabuse became the first Japanese-born player to play in the N.B.A. in 2004, but lasted only four games with the Phoenix Suns.)

In Japan, basketball is watched much less than baseball, soccer, tennis and sumo wrestling. Local newspapers will publish the occasional basketball story, such as the news last month that the Raptors had converted Watanabe to a standard N.B.A. contract. But N.B.A. games are available only online, through a streaming partnership between the league and Rakuten.

To find basketball coverage in Japan, you must actively seek it out.

For the longest time, the news media reported only traditional game stories, which was an adjustment for the former Lakers center Robert Sacre, who played professionally in Japan for three seasons.

There’s now a growing number of social media accounts, YouTube channels and podcasts, and they’re helping to provide the kind of off-the-court, personality-driven stories that reflect how basketball is covered in North America.

“It’s become different in the last decade,” said Detroit Pistons Coach Dwane Casey, who coached in Japan from 1989 to 1994 and visits regularly. “You can see the younger generation getting more excited about basketball, and they’re covering it now. They’re into all the same things that get the younger generation’s attention in North America.”

N.B.A. teams are recognizing this new appetite for digital content. The Raptors featured Watanabe in an episode of “Open Gym,” their behind-the-scenes video series, in February. It is the season’s most-viewed episode. And in 2019, the Wizards hired Zac Ikuma, a bilingual sports reporter in Japan, as a digital correspondent. The team has a dedicated Japanese Twitter account, and Ikuma hosts a Japanese-language podcast for fans overseas.

Shibata has also ventured into telling different kinds of stories online. One of his most popular features was about a group of female Raptors fans in Toronto who nicknamed themselves “the Watana-baes.” The story, an explainer on the term “bae,” was picked up by a Japanese television network.

The digital activities of younger basketball fans are also helping give the North American audience a better idea of how the game is perceived in Japan.

A few weeks after video of the Edwards dunk against Watanabe went viral, a Japanese reporter asked Watanabe about the play. The interview was translated into English by the Twitter fan account @RaptorsInfoJPN.

“In a situation like that, most people avoid it these days for fear of it going viral on the internet,” Watanabe said. “I think, if I do so, I shouldn’t be here anymore and I shouldn’t get any playing time.”

For Shibata, the play exemplified Watanabe’s work ethic, which has opened the door for a new generation of basketball players in Japan to dream of one day following the same path to the N.B.A.

“It was only two points,” Shibata said. “We were proud of him for sacrificing his body to try to stop the dunk. To be an N.B.A. player, you have to stop these guys in the air. To do that, you can’t hide.”