Home » Sport » A Danish soccer club scored the most comical own goal you’ll ever see, including 2 players falling over each other, and another getting stuck in the net 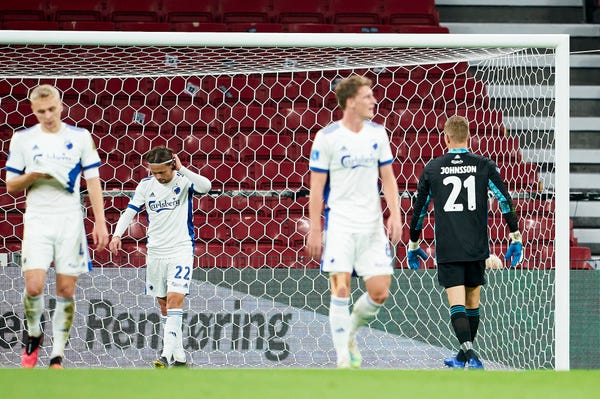 However, it did have one moment that will without doubt go down in the history books in the form of one of the most comical own goals of all time.

The comedy of errors began in the 19th minute when Copenhagen defender Victor Nelsson attempted to clear the ball near the half way line, only to miss, take out an opposition player, and present Rijeka striker Franko Andrijasevic with a near free run on goal.

Nelsson chased Andrijasevic back, however while doing so, tripped over his teammate Ragnar Sigurdsson, who had slipped to the ground due to the wet surface.

Now clear through on goal, Andrijasevic lobbed the keeper, only to see his effort bounce back off the crossbar and directly into the shin of Copenhagen's Peter Ankersen and into the net.

For good measure, Ankersen then fell over and became tangled in the net as Rijeka celebrated.

Reactions to the goal were largely unsympathetic, with chess champion Magnus Carlsen comparing the game to a sketch by famed silent movie star Charlie Chaplin.

"A new Chaplin movie being recorded in Copenhagen this afternoon," he wrote on Twitter.

Rijeka went on to win the tie courtesy of Ankersen's hysterical own goal, with the Croatian outfit qualifying for the group stages of the Europa League for the fourth time in 10 years.

Copenhagen on the other hand missed out on qualification to the competition for only the second time since 2006.

Elsewhere in Europa League qualifying, Tottenham Hotspur thumped Israeli team Maccabi Haifa 7-2 to secure its spot in the group stages, while AC Milan snuck past Portuguese side Rio Ave by way of a thrilling 24-penalty shootout.