What we want in bed is Ted! As it’s revealed one in three adults still sleeps with a cuddly toy, four women tell why they still love their childhood teddies as much as any man

Comforting, consoling, the perfect companion — most of us can recall the attachment to a favourite childhood toy. But how many of us still sleep with our teddy bear?

According to a recent survey, a staggering one in three British adults admits to still taking teddy to bed. And even after marriage and starting families of their own, it seems growing numbers of women are refusing to relinquish their childhood confidante.

The results? Jealous husbands, baffled children and a devotion that knows no end, as these four women explain…

Sniffy the Dog’s just been to a Spice Girls concert

Freelance editor Rebecca Denne, 35, is single and lives in Kent. She has a stuffed dog called Sniffy. Rebecca says:

Sniffy’s a little biscuit-coloured dog complete with a tail and is incredibly important to me. He has been a constant presence since I was two.

Strictly speaking, he is Sniffy mark two, because rather tragically I lost the original Sniffy while out shopping with my mum.

My older sister, who was four at the time, remembers we were in a Croydon shopping centre when I dropped Sniffy through some railings. It was raining and Mum couldn’t reach him. Wisely, she found a toy store and bought me a new one the same day. 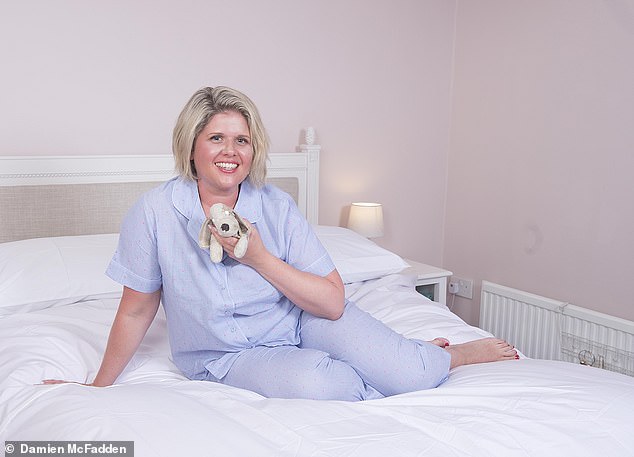 Rebecca Denne, 35, has had Sniffy the dog at her side since she was just two years old and said she is not ashamed of her cuddly friend

When I was a child, he was very comforting and smelled like a bakery. However, after a BBQ Mum popped him in the washing machine. I was horrified! He never looked or smelled the same again.

As I got older, my relationship with Sniffy grew stronger — especially as I started to go to sleepovers or be away from home.

One summer, I had been to a family wedding when I realised I’d left Sniffy at my auntie and uncle’s. They offered to post him, but it was out of the question that I’d risk Sniffy with the Royal Mail. So my cousin had to do a 50-mile round trip! Even today, Sniffy comes on holiday with me. I don’t go anywhere without him.

He lives on my bed and sleeps with me. I have to have him there when I go to sleep and would panic if he wasn’t with me.

I know I’m not alone. One friend, who lives in Italy, still sleeps with her teddy Edward. My best friend has one called Triangle Head. Sniffy and Triangle Head often hang out together — last week they even enjoyed a trip to Manchester to see the Spice Girls!

None of us are ashamed. It shows our vulnerable side and reminds us of the childlike aspects of our personalities. When friends come to stay with their children, I am careful about who gets to hold Sniffy. After all, he’s an elderly dog now and his tail is hanging off.

I’m single, but whenever a new partner stays over and it’s early days in the relationship, I’m afraid I have to admit that I hide Sniffy under the bed. Sorry, Sniffy!

He’s had a couple of minor operations, not always with great success. When Sniffy’s eyes wore off, my dad attempted to draw them back on with marker pen. He looked demonic!

Admittedly Sniffy, whose stuffing is coming out now, looks his age. But I see past those things. He’s my beloved bedtime companion.

Blogger Biba Tanya Lynchehaun, 38, is married to Kevin, 58, an engineer. They live in Clitheroe, Lancashire, with their children Sebastian, 14, Tabitha, four, and Lola, one. Biba is the proud owner of Teddy-Wed. Biba says:

Biba Tanya Lynchehaun, 38, is married but still sleeps with Teddy-Wed every night

Teddy-Wed and I have slept together almost every night since my first birthday. According to my family, I gave him the name when I was 18 months old.

Like most teddies, when he was brand new he was sturdy and rather fluffy. Today — sorry Teddy-Wed — he’s a bit of a rag. Yet his imperfect appearance doesn’t diminish my love for him.

I went to boarding school. Girls would prank one another and our teachers tolerated most things. It was no big deal to tie our lacrosse racquets together or stuff something yucky into someone’s bed. Everyone took it as a bit of a laugh.

The only prank that resulted in serious punishment was if you misbehaved with someone else’s teddy bear. A bear from home was our safety net.

It wasn’t weird to have Teddy-Wed at boarding school, or even afterwards as a young woman. None of my female friends have ever walked into my bedroom and acted surprised. I’d talk to him all the time. Especially when I fell out with friends!

On my 21st birthday, I was in a terrible car accident and broke my neck. I ended up staying in hospital for 16 weeks. I couldn’t settle until Dad brought Teddy-Wed in.

The medical staff were relieved. They could see his presence settled me. One nurse even commented that he calmed me more than any medication. Teddy-Wed even came in the MRI machine with me.

My children know he is out of bounds. When one of them first met him and asked who he belongs to, I’m afraid I got very territorial and said: ‘That’s mine!’ I won’t let them develop any sort of connection with him.

Teddy-Wed sleeps on my bed in the day and snuggles into the nook of my arm while I sleep. My husband doesn’t mind, when he met Teddy-Wed he found our connection rather endearing.

Today, he no longer really notices him in bed with us. When we have ‘special cuddles’ it’s the only time I’ll gently place Teddy-Wed on the floor. I couldn’t imagine doing anything with his eyes on me!

Though Teddy-wed is rather battered, I’m so aware of his presence I’ll wake up if he isn’t with me and retrieve him from the floor.

I don’t take him away on holiday, though. I once lost a bag while I was abroad. The thought that such a thing could happen with Teddy-Wed inside gives me nightmares.

I know I should get Teddy-Wed re-stuffed, but I can’t bear the thought of sending him away.

I’d save Grey-Ted first in a fire – not my husband!

Jacqueline Barnett, 44, owns a catering company and lives in Battersea, London, with her husband. Jacqueline, who is the owner of Grey-Ted, says:

Grey-Ted is my childhood dog. Well, he used to be a dog. Sadly he’s unrecognisable now and looks more like a blob!

In his heyday, he sported a tail and collar, now long lost. The same goes for his mouth, nose and original eyes. Yet he still has pride of place in my bed — and even after 44 years, he still has his squeak. My late godfather gave him to me on the day I was born and my parents said I took him everywhere. My mum lived in constant fear that we might lose him. 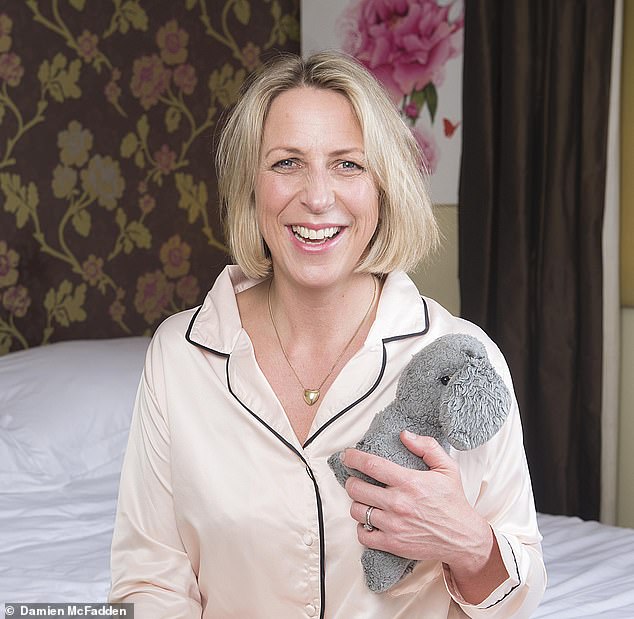 Jacqueline Barnett, 44, has had Grey-Ted since she was a child and her husband is not too keen on her cuddly toy, often stuffing him away in drawers and suitcases

I suffered from frequent ear infections, so Grey-Ted was diagnosed with the same condition. When I had my medication, my mum would say: ‘Here’s medicine for Jackie and here’s a spoonful for Grey-Ted!’

Whenever I see posts on social media about lost teddy bears or spot one sitting on a wall that has been dropped, my heart breaks for the child who’s lost their toy.

It’s a tough call between whether I’d rescue my husband or Grey-Ted in a fire. While my husband could fend for himself, Grey-Ted would be the first non-human thing I’d rescue. There is only one Grey-Ted!

My husband and Grey-Ted don’t see eye to eye. He often hides Grey-Ted in drawers and suitcases. He even hung him upside down outside the window by his stumps.

I’d hate anything to happen to Grey-Ted. When I pop my clogs, I want him buried with me. 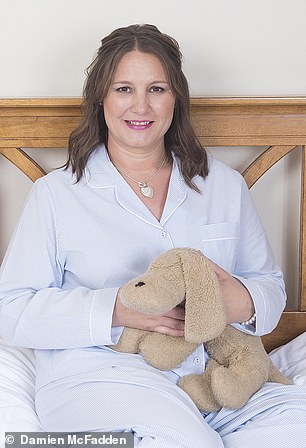 Helen Hayes, 45, took Kifle on her year abroad to Madrid

I STILL sleep with my teddy. He’s the same shape and colour as a Kifle — pronounced Kif-lee — which is a Hungarian bread roll.

My mum is Hungarian and as a child we visited her family regularly during the school holidays. A kifle was my favourite breakfast: I’d have it with cream cheese, white pepper and salami. It’s delicious!

Today, my Kifle is a beige, one-eared dog stuffed with old socks. He’s had numerous operations over the years and has got used to being stitched up on regular basis.

Kifle’s been everywhere with me. I studied economics and Spanish at Leeds University and spent a year in Madrid. Naturally, Kifle came too.

My fellow students weren’t always so kind to him. He has been hung up by his neck and almost tossed out of the window during fresher year pranks. Even so, more than two decades later, my university friends still ask how he is doing!

Today, I keep him safe and he doesn’t leave my bedroom. During the daytime, he has pride of place in the middle of the bed. I don’t cuddle him at night any more, though.

My daughter knows he is my prized possession. She’s very respectful of Kifle and even though she has often borrowed him when she can’t sleep, she knows he’s only ever on loan.

He always helps her drop off and she returns him without fail to my bed the following morning.

Even my real dog, Teddy, has never attempted to steal Kifle — he knows better than that!

When I try to unravel why Kifle is important to me, I liken it to the Danish Hygge movement. This homely philosophy of cosiness and happiness really chimes with me. And that’s what Kifle represents.