‘It looks like Christmas!’ Woman who hates the red and green engagement ring her boyfriend designed after accidentally seeing it in his emails asks whether she should tell him to cancel the order – but what would YOU do?

A woman has revealed that she hates the custom-made engagement ring her boyfriend has designed for her after accidentally stumbling upon it on his tablet.

Taking to Reddit for advice, the anonymous woman, 27, believed to be from the US, explained how she had been watching movies on her 30-year-old partner’s tablet when an email notification for the engagement ring payment flashed up.

She admitted that she couldn’t resist taking a look but was disappointed when she saw the green and red ring, which she said reminded her of ‘Christmas.’

Although she acknowledged the thought that went into designing the special ring, the woman admitted she was ‘ashamed’ she didn’t like it and asked whether others thought she should get a say because she’ll be the one wearing it forever. 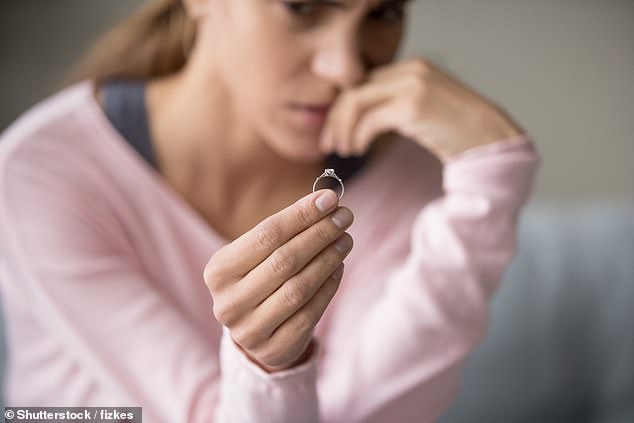 An anonymous woman, 27, from the US, took to Reddit and revealed that she accidentally came across the custom-made engagement ring her boyfriend, 30, has designed for her – but hates it (stock image)

Explaining the situation on the online forum, she wrote: ‘I sometimes borrow my boyfriend’s tablet to watch movies on my work trips (with his permission of course). Last night I was watching something and an email notification popped up.

‘I’m so embarrassed about this part because I usually am 100% respectful of his privacy but I read the title of “engagement ring initial payment” and Pandora’s box was already opened at that point.

‘I am completely shocked – he has been custom-designing a ring for the last two two months. It clearly has sentimental value, he has put so much thought into it and I am speechless and so grateful.

‘But… I am so ashamed to say that I just don’t like it. The stones are green and red, I just can’t get Christmas colors out of my mind.’

She went on to ask members of the forum if she would be wrong to ask him to cancel the order, saying: ‘Here’s the thing – he just sent the approval email yesterday, it hasn’t been made yet. 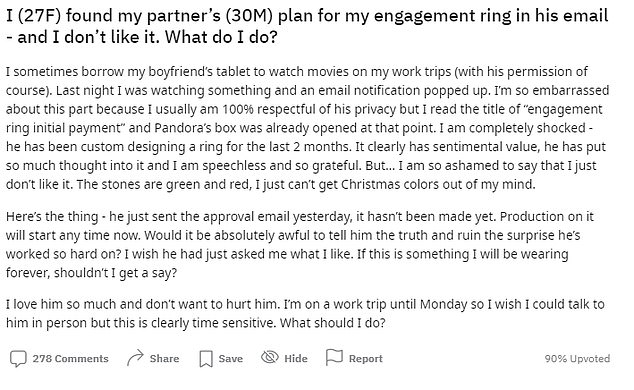 She said she was ‘ashamed’ that she couldn’t resist taking a look but was disappointed when she saw the green and red stones in the ring, which reminded her of Christmas

‘Production on it will start any time now. Would it be absolutely awful to tell him the truth and ruin the surprise he’s worked so hard on? I wish he had just asked me what I like. If this is something I will be wearing forever, shouldn’t I get a say?

‘I love him so much and don’t want to hurt him. I’m on a work trip until Monday so I wish I could talk to him in person but this is clearly time sensitive. What should I do?’

Reddit users rushed to the comments to give her advice on the situation, with most people encouraging her to tell him she doesn’t like it before he makes the final payment and it’s too late.

One person wrote: ‘Tell him. Right now. In fairness to you, the red and green stones sound like a really bad idea.’

While another person agreed, writing: ‘That color combo will forever belong to Christmas.’

Another person also concluded that she should have the ‘awkward conversation’ with her partner to save her from wearing the ring she doesn’t like for the rest of her life. 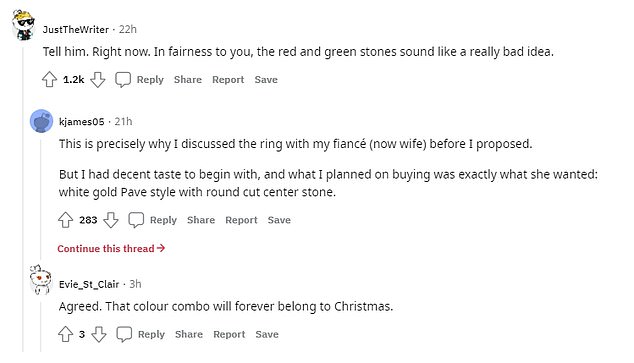 Reddit users rushed to the comments to give her advice on the situation, with most people encouraging her to tell him she doesn’t like it before he makes the final payment and it’s too late as she will have to wear the ring forever

They wrote: ‘I think you should absolutely tell him. He’s going to spend a lot of money on this and if all goes well you’re going to have this ring for the rest of your life.

‘One awkward conversation is worth a ring you actually want to wear.

‘[For what it’s worth] this is why I think surprising your significant other with a ring is a bad idea lol. My girlfriend and I are ring shopping together next week, and I know a lot of people who go this route so they don’t end up with something they don’t like.’

One person gave the woman advice on how to frame the conversation with her boyfriend, saying she should lead with the positives.

The user penned: ‘Tell him, make it clear that you think it’s a fantastic thing he’s done and that you really love that he put the time and effort into making it but just suggest an alternate color scheme because you aren’t fond of it.

‘To be fair, it probably won’t look as christmassy as you might think, but it’s definitely worth being honest.

‘Also apologize for prying, just explain that the opportunity came up and while you didn’t intend to ruin the surprise, curiosity got the better of you.’