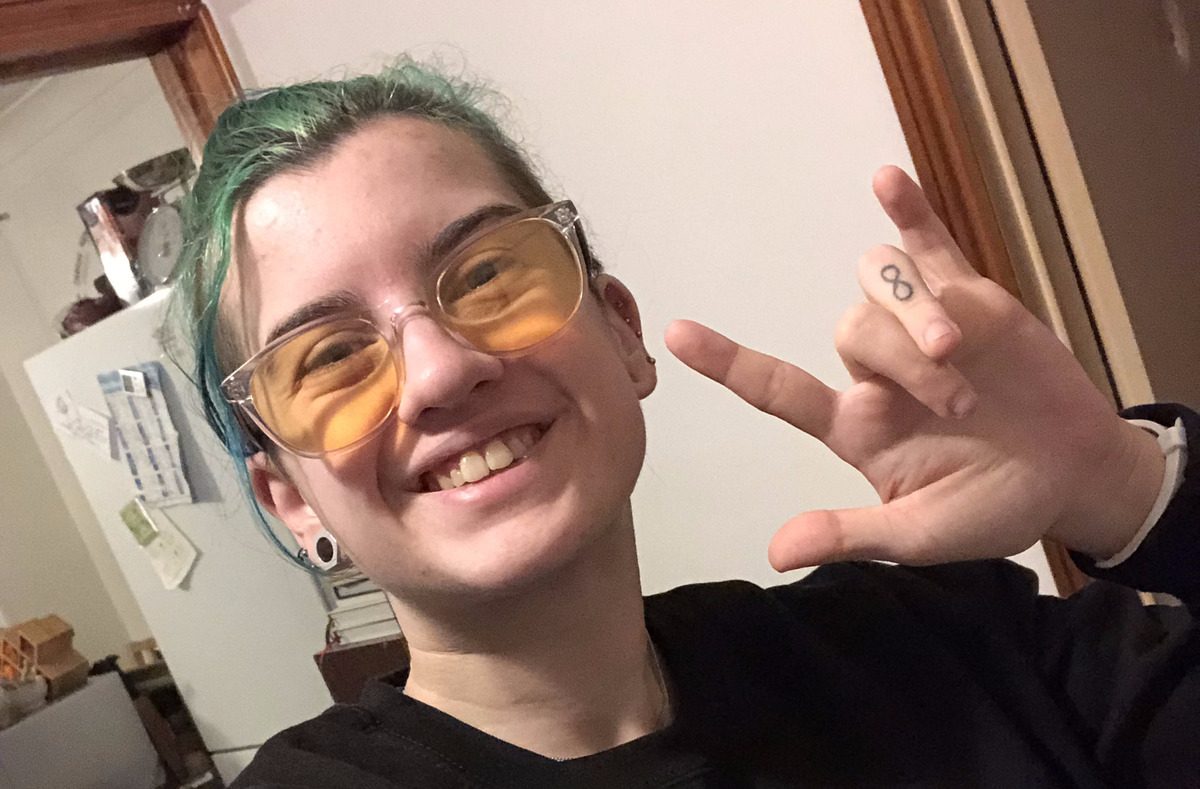 I still recall discussing it with someone I was interested in dating and spending about four hours on the sofa going through what we were both comfortable with.

This included things like what rules we wanted in place, such as when we would inform the other if we were interested in anyone else, the way the relationship would function and ensuring I fully explained the essentials so I could relax knowing they had fully and ethically consented to polyamory. In fact, we’re still friends now.

I’m Max, a disabled and DeafBlind genderqueer person, and myself and my friend Jasper, a proudly Deaf and disabled trans man, both identify on the asexual spectrum (a person who experiences little or no sexual attraction), and we are also polyamorous and unapologetically queer.

By this we mean that we view sexuality as more nuanced than a narrow identity –  it’s dynamic, fluid, and way beyond the binary of heteronormativity.

We are full to the brim with love and contrary to popular belief, we’re not dating each other!

My first real conversation about polyamory was during a caucus at an LGBT+ student conference.

I remember afterwards when I spoke to a fellow delegate about it, they said ‘Wow, you? polyamorous? I thought you’d have trouble finding one partner, let alone two.’ I was shocked.

They hadn’t considered that disabled people could be polyamorous. We had an uncomfortable discussion about how polyamory is for everyone, regardless of disability, sexuality, gender, religion, race, or age.

But it often seems so taboo, portrayed as this niche club that you can only be a part of if you tick certain boxes.

For me, the word ‘polyamory’ always lurked in the background of my vocabulary, and there was no big moment of sudden realisation, just a development of my life to that point.

In the six years or so that I’ve been polyamorous, I’ve been in a number of successful relationships.

In my first polyamorous relationship, we all decided to dive in headfirst.

We discussed among ourselves the basics of this approach, and we even wondered whether or not it was legal.

We had to learn to communicate and navigate situations as they unfolded, which wasn’t without problems. New relationship energy took hold of each of us individually, and we fell into the trap of thinking that all our partners had to meet and be best friends – or even date each other.

We all lacked the nuance that research could’ve given us, but that relationship taught me many things about not just non-monogamy, but myself too.

I (Jasper) have had a slightly different experience to Max.

I entered my first non-monogamous relationship accidentally – halfway through a first date, the person mentioned they had a girlfriend.

My mind was blown, and I was introduced to the world of polyamory. I didn’t totally get it at the time, and it felt like they didn’t either.

When, for example, they would go on a date with someone, I was usually informed after the fact.

This was a turning point in knowing what became crucial to me, the importance of an ethical non-monogamous relationship, and how I planned to communicate with future partners.

It made me realise I valued open and honest conversations from the get-go and that I wanted my connections all to be significantly separate, but equally important.

I am currently in three separate relationships and have been happily for over four years.

A few facts about non-monogamous relationships…

Monogamy is a relationship between two people, whereas ethical non-monogamy is an arrangement where consenting adults have multiple connections. This could be any form of relationship, as long as there is consent.

Polyamory is a form of ethical non-monogamy when you have multiple relationships with different people at the same time. Polygamy is when a person (usually a man) is married to multiple people; it is not legal in the UK.

One of the biggest myths is that polyamory is ‘just cheating’.

If you are having an affair, it is not polyamory and it is not ethical non-monogamy. Cheating often involves lies, deception, and relationships outside of the boundaries of existing committed relationships.

Polyamory relies on consent, trust, and honesty, while cheating is condemned. The only difference with traditional relationships is the number of partners we have.

A grey area can occur when someone in a monogamous relationship has feelings for more than one person but remains fixated on that search for ‘the one’.

Non-monogamy is made up of healthy, consensual relationships, without focusing on finding your one true soulmate.

Another myth is that we all just want to have threesomes.

TV shows like Open House (which sees real-life ‘committed couples’ experiment with threesomes), and the drama You Me Her, (where a closed throuple navigates their sex lives and jealousy), only push the narrative that polyamory is just about one extra person.

It diminishes polyamorous relationships to group sex, and it prevents different romantic dynamics from being seen as equal.

There are many types of relationships under the non-monogamy umbrella, some will involve more than one person dating the same people, and others won’t.

We’ve also encountered an idea that there must be some kind of rivalry of who is the ‘better’ partner when actually, in healthy non-monogamy, there is regular transparent communication to ensure that everyone feels they are treated equally and not excluded.

Some connections may be hierarchical, others won’t be.

Not every partner wants to be treated exactly the same.

In a nesting partnership (where partners typically live together, share finances and have other joint responsibilities) other partners might not want that level of commitment, just like some monogamous couples choose not to live together.

Some partners want a more casual approach, and conversations in any partnership should make sure you are on the same page.

There is more to polyamory than sex; most (if not all) representation focuses on shocking viewers with exaggerated tropes, painting us as weird.

Please respect our relationships, even if they are different to yours and you don’t fully understand them. We’re not actually unicorns, we walk among you, and there’s more of us than you think.

Polyamory represents is love, in the many forms that it takes.

Rush Hour Crush – love (well, lust) is all around us

Tell us about your Rush Hour Crush by submitting them here, and you could see your message published on the site.