Art is long but lockdowns are short – even if they seem interminable. With museums and galleries closed, or open by appointment only, this presents a rare opportunity to trawl back over the history of art looking for subjects that illuminate the present. We often hear that a great work of art is “timeless”, meaning that it looks just as impressive today as it did when first exhibited. But there are plenty of former masterpieces that leave us cold today, and just as many ignored or derided works that are now revered. 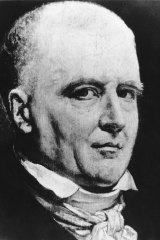 Jean-Honoré Fragonard (1732-1806) is one of art’s enigmas. No misunderstood, romantic genius who struggled for acceptance in his own time, the young Fragonard succeeded with everything he attempted. He gained the highly competitive Prix de Rome at the age of 20. He was accepted into the French Academy at the age of 33, with a massive history painting called Coresus Sacrificing Himself to Save Callirhoe. The picture was exhibited in the Salon of 1765 and earned glowing praise from Denis Diderot, often spoken of as the first art critic. The work was acquired by Louis XV and may be found in the collection of the Louvre.

A brilliant career stretched out before the artist, with all the trimmings of fame and fortune, but he declined to accept the invitation. Although he seemed destined to become a leading light of the Academy and painter to the French Court, he opted for the uncertain path of a freelancer.

In a new monograph, Fragonard: Painting Out of Time, Satish Padiyar, tries to get beneath the skin of this elusive painter who apparently preferred artistic freedom to material reward. His task is complicated by a dearth of biographical information. In an age of voluminous correspondence, Fragonard left no letters and no diaries. Even the accounts of his peers are sketchy and possibly misleading. 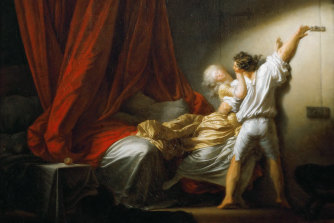 While sticking closely to the available documentation Padiyar has allowed himself the interpretative freedom to divide his study into three sections: secrets, surprise and dreams. This may sound like a licence for fantasy but nothing in the book is wildly implausible. This is partly because he is building on a vast body of existing scholarship, such as Mary D. Sheriff’s Fragonard: Art and Eroticism (1990), which covers much of the same ground, but with a different emphasis.

Fragonard’s life is complicated because he straddles two antithetical moments in French art. His early successes are considered products of the Rococo, stigmatised as a decadent, frivolous, hyper-decorative style in thrall to the tastes of aristocratic patrons such as Louis XV’s mistress, Madame de Pompadour. With hindsight we’re less critical, many historians seeing Rococo as symbolic of “the precariousness of life”.

The Rococo began in the early 1700s as a reaction to the formality of art and architecture at the court of Louis XIV. Fragonard is usually viewed as the third great master of the Rococo, after Antoine Watteau (1684-1721) and François Boucher (1703-70), but the style was already losing ground in the 1760s, as taste-makers called for a more noble, austere form of art. The ascendancy of Neo-classicism is cited as one of the possible reasons Fragonard would abandon painting in the 1780s, a good 20 years before his death.

By the time of the French Revolution of 1789 and the upheavals that followed, the Rococo was already dead. Many of its patrons would lose their wealth, if not their heads. Fragonard, through the auspices of that political animal, Jacques-Louis David, would secure a job in the Louvre as an official of the National Art Collection. He is not known to have produced another work of art.

Like every other art historian, Padiyar wonders what it was that prompted such an inspired painter to bring his career to an abrupt end. It’s especially mystifying considering that Fragonard’s only recorded statement about his vocation is: “I would paint with my arse!”

Fragonard emerges from this book as an artist at odds with his time, whose love of painting would lead him away from all the official channels. When the advanced taste of the day called out for large-scale history paintings he chose to make small, intimate pictures for private clients, mixing genre with eroticism. Fragonard had proven to himself, and everyone else, that he was capable of the grande machines valued by the Academy, but he had no intention of making any more of them. 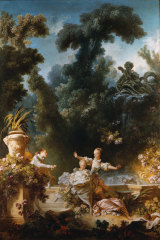 Madame du Barry sent them back: A painting from the series ‘The Progress of Love: The Pursuit’ now in New York’s Frick Collection.Credit:Corbis/Getty

“Fragonard declined to paint with ambition,” writes Padiya, and in a serious, self-aggrandising register.” His earlier critics saw this as a betrayal of the highest aspirations of art in search of a quick buck. Later commentators have seen his refusal as indifference to financial rewards and social success.

More than any artist of his era Fragonard worked in a remarkably free and expressive manner. When he exhibited the four large panels we know as The Progress of Love (1771-72), (now in the Frick Collection, New York), one writer listed the elements of his style as “the rough, the rolled, the whipped-up, and the daubed.”

Looking at these pictures today they appear immaculately finished but this is not how they seemed to 18th-century viewers. The panels were commissioned by Madame du Barry, who sent them back and transferred the job to Joseph-Marie Vien. He produced four dull pictures in a Neo-classical mode, complete with figures in togas, and tiny cupids.

What was wrong with Fragonard’s panels? They may have been a little too broad and flamboyant in execution but the most likely source of offence was the striking vivacity of each scene, which showed lovers in contemporary dress striking attitudes of surprise and rapture.

The most likely source of offence was the striking vivacity of each scene, which showed lovers striking attitudes of surprise and rapture.

All of Fragonard’s work – the paintings and especially the drawings – displays tremendous energy. In a series of so-called Fantasy Portraits (c. 1769), the brushwork is so free it anticipates the abstract art of the 20th century. This is, incidentally, one of the reasons we admire Fragonard so much: he reminds us of ourselves. 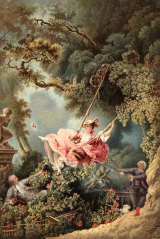 It’s an irony that Fragonard’s best-known painting today is The Swing, in the Wallace Collection, London. It was painted as a private commission, and not widely known in his lifetime, but it has become an icon of the period. We see a young woman in an elaborate pink dress, swinging through the air with such force that one of her shoes is sent cascading. At the bottom left a fashionably dressed young man reclines on the ground, staring wide-eyed and open-mouthed as the woman’s skirt opens in front of him. She knows he is there and looks directly at him. It’s a remarkable sexual tease as she swings back and forth, letting him catch a fleeting glimpse of what lies beneath those layers of frills and flounces.

Everything in the composition converges on the woman, including the gazes of the man, a tiny dog and two small statues. She is a revelation illuminated by a shaft of light that enters through the dense foliage. The wonder of the painting is the way it dramatises the act of seeing, with the young man’s excitement mirroring our own visual frisson as we discover one detail after another. It’s the thrill of what’s seen and not seen – that underlying element of eros that underpins the way a painting reveals itself under close examination. Fragonard knew this, and we know it too.

Fragonard: Painting Out of Time by Satish Padiyar is published by Reaktion Books, $79.99