Hospitality and tourism operators want the Andrews government to follow New South Wales’ lead by creating a voucher plan for Melbourne restaurants and destinations to help restore thousands of jobs wiped out during the pandemic.

The government in Tuesday’s state budget unveiled more than half a billion dollars in funding to help businesses put back on 180,000 jobs lost since a state of emergency due to coronavirus was declared in March.

Between March and September, Victoria's unemployment rate rose to 6.9 per cent. Even that rapid 1.6 percentage point jump doesn’t fully capture the number of newly underemployed − people who lost many of their hours due to the pandemic.

Among its strategies will be the government hiring around 375 extra Jobs Victoria “advocates” to work within organisations like the Brotherhood of St Laurence and Jesuit Social Services, to help unemployed people find a job.

A wage subsidy of around $25,000 per employee will also be paid for 10,000 jobs at companies that employ new staff. Six-thousand of those positions will go to women, who were more likely than men to have lost work during the pandemic.

The government will also give a 10-cent payroll tax credit to businesses for every dollar they spend on new jobs, or on pay rises for staff. This is designed both to help firms put on extra staff and to assist them in bringing workers demoted to part-time roles back on full-time.

The Victorian Chamber of Commerce and Industry, which had pushed hard for payroll tax reform, welcomed this “new jobs tax credit”, but said the government should have gone further.

Under the existing scheme, any business paying wages to staff totalling more than $650,000 must pay a tax of 4.85 per cent. VECCI wanted total wages paid to staff to total more than $1 million before payroll tax kicked in. The government did not do this.

One critic in the hospitality sector said the budget left restaurants with "table scraps" rather than using a NSW-style voucher system to directly stimulate dining and tourism.

A key element of NSW Treasurer Dominic Perrottet’s budget this month was “Dine & Discover NSW”, via which every adult in the state will in January get four $25 vouchers, two to be used for food at restaurants, cafes and pubs and two for use at entertainment venues.

The Victorian government announced the same day as the NSW budget it would offer Victorians 120,000 vouchers worth $200 but only if they first spend $400 on accommodation, attractions or tours in regional Victoria.

Restaurant & Catering Australia chief executive Wes Lambert said Victoria should have followed NSW. Instead, he said, hospitality had "been left with the budget equivalent of table scraps". Without more direct help, he said, "so many businesses will fall off the cliff on April 1" next year when Canberra's JobKeeper wages subsidy ends. 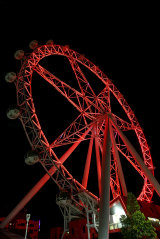 The Melbourne Star observation wheel in Docklands, lit up earlier this month for Remembrance Day. Its operators have halved their staff since last summer.Credit:Robert Cianflone/Getty Images

But Premier Daniel Andrews said there had been “very significant support” to hospitality. “Not just cuts to payroll tax, but full refunds of three-quarters of a year's payroll tax back in their bank account," he said. "The best thing I can do for restaurants is make sure people are in work, so they can turn up and be customers at those restaurants."

Tourism operators also want more direct state funding, with the company behind the Melbourne Star observation wheel in Docklands arguing there needed to be more initiatives to attract people into the city centre.

A voucher scheme encouraging people "to reconnect with the city, stay overnight in a hotel, visit a local attraction and drink and eat at city restaurants, cafes and bars" would kickstart the CBD economy, the company’s operations and finance head Daniel Greenbank said.

The observation wheel didn’t run for 231 days this year because of lockdowns. From a peak of 100 staff last summer, it now has just 50. The business reopened last week, with private cabins for up to 10 people.

The attraction kept its light show running when closed, saying in a statement it was to mark the state’s “spirit of endurance and to give those in our community much-needed bursts of joy”.

VECCI’s chief executive Paul Guerra also backed the introduction of a wider voucher system, saying while the regional scheme would support country Victoria, metropolitan hotels and attractions were unlikely to benefit. “Nor will restaurants, cafes and pubs.”

“A system like the Out and About Voucher scheme that NSW will operate would be more equitable across all the industries that support our visitor economy, including hospitality, metropolitan attractions and metropolitan accommodation providers," he said.