Home » Lifestyle » US, Australia to strengthen ‘unbreakable’ alliance as bulwark against China

Australia and the United States will deepen their already “unbreakable” military alliance by announcing plans to accelerate Canberra’s push to secure precision-guided missiles and expand the American military presence in the Top End.

The US and Australia will also vow to work closer together on foreign policy initiatives in South-East Asia and the Pacific as they seek to restrict China’s influence in the region. 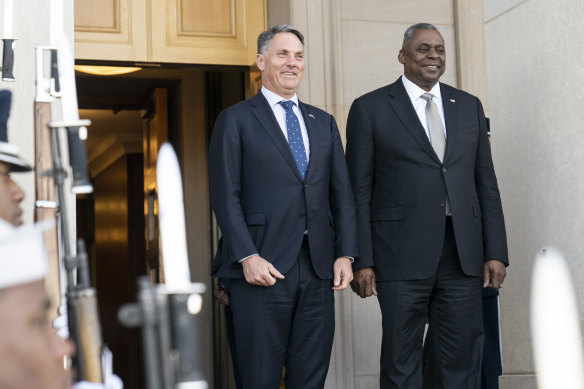 Foreign Minister Penny Wong and Defence Minister Richard Marles will meet their US counterparts in Washington on Wednesday for the first annual Australia-US Ministerial (AUSMIN) consultations since the Albanese government took office.

This year’s talks are particularly significant, coming just three months before the government releases a sweeping review of the nation’s defence forces and reveals which model of nuclear-powered submarine it will adopt under the AUKUS pact.

Marles has said he wants to secure nuclear-powered submarines as soon as possible while ruling out speculation a small number of US vessels could be temporarily based in Australia until Australia can help assemble its own fleet.

Meanwhile, US congressman Rob Wittman, the top Republican on the House armed services committee’s seapower subcommittee, ruled out the idea of Australia buying one or two submarines off the shelf from the US in the near future.

“There’s been a lot of talk about well, the Australians would just buy a US submarine. That’s not going to happen,” Wittman told news site Breaking Defense.

As he called out China for its “coercive and destabilising military activities” in the Asia-Pacific, US Defence Secretary Lloyd Austin said the US and Australia were “focused on ambitious steps to further strengthen our unbreakable alliance”.

“And that’s within reach because our two democracies are so closely aligned on our most important strategic challenges and opportunities,” Austin told reporters after welcoming Marles for a meeting at the Pentagon.

Austin noted the talks come “at a time of tension, especially from Russia’s reckless and lawless invasion of Ukraine, as well as from coercive and destabilising military activities by the People’s Republic of China”.

“I think it’s safe to say that the alliance between United States and Australia is as strong as it’s ever been, and it remains vital to regional security,” he said.

“Our two countries share a common vision for a free and open Indo-Pacific, and we seek a region where all countries are free to chart their own course. Where all states adhere to international rules. And where all disputes are resolved peacefully, and free from coercion.”

Austin said the US and Australian governments were looking to strengthen their “bilateral security co-operation on posture, capabilities and defence industrial ties”.

The ministers were expected to discuss ways to expand Australia’s role in repairing and maintaining US military equipment and help Australia secure long-range strike weapons.

Foreshadowing an “ambitious agenda” at the AUSMIN talks, Marles said the US and Australia faced a strategic environment “as complex and precarious as it’s been at any point really since the end of the Second World War”.

Marles said there was a “very strong alignment between our two governments right now” and a “real closeness and shared mission between Australia and the United States”.

Marles and Austin will meet with United Kingdom Defence Secretary Ben Wallace at the Pentagon later in the week for the first meeting of AUKUS defence ministers.

With a decision due by March, the ministers will hone in on the detail of how Australia will acquire a fleet of up to eight nuclear-powered submarines.

Marles and Wong will then travel to Tokyo for meetings with their Japanese counterparts as they seek to deepen Australia-Japan military ties.

“US engagement in the Indo-Pacific makes an indispensable contribution to regional prosperity and strategic balance.”