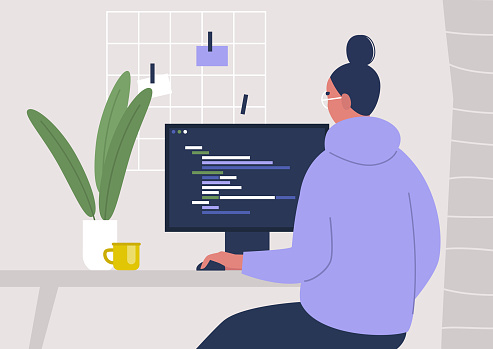 The restrictions caused by the pandemic has shown many of us that there is a new way to work.

Whether it’s debating whether or not to return to the office, or the ongoing conversation about the four-day working week, many workers are excited by the possibility of change.

As a result, the 9-to-5 office job is at risk of dying out as workers seek more flexible ways to earn a living post-Covid, researchers have warned.

It’s not just employees who are looking to make big changes.

According to a report from the Future of Work Institute (FoWI), bosses are increasingly looking to ditch full-time staff in favour of gig workers who can complete on-call assignments.

The report, which looks at changes in the working landscape after the pandemic, examines how many people forced into hybrid or fully-remote working will look to avoid returning to the Monday to Friday grind once offices reopen.

‘This month many workplaces will be looking to bring staff back to the office for the first time since March last year,’ says Alok Alstrom, founder of the FoWI.

‘Many people will have grown accustomed to the flexibility and various benefits working from home can bring, and we think they won’t be willing to give them up so easily.’

The research has identified ‘a new paradigm’ for traditional professional work since the global adoption of remote working.

The report says businesses have been forced to ‘rethink their workspaces, their talent pools, and what skills they look for in talents’.

‘By shifting their workplaces to home offices,’ the study continues, ‘many employers are finding new opportunities in supplementing their resourcing needs with freelancers and contingent labour. Workers are following this trend as well.’

‘We’ve already seen how business models can be upended overnight, so it’s naïve to think all workplaces will go back to exactly how things were before,’ adds Mr Alstrom.

‘Rather than being locked into working eight hours a day from Monday to Friday, the gig economy means people can pick up assignments or gigs when they want and complete them in a timeframe they choose.’

Data from leading global platform AppJobs shows the UK’s gig economy is on course to surge 300% in three years.

According to the website, which helps workers find paid roles using multiple apps, in the first six months of this year they saw a 23% rise in the number of people connecting with opportunities.

The gig economy is a flexible way of working in which people are paid for each ‘gig’ they perform, rather than a specific daily or hourly rate.

This means they can work across various apps doing different jobs and at a time to suit them.

According to research by the University of Hertfordshire, between 2016 and 2019, the UK gig economy workforce doubled with one in 10 working adults using gig economy platforms in 2019.

However, gig economy working also comes with its own fair share of problems, and can perpetuate pre-existing inequalities.

It is a precarious and unstable way of working, which can lead to inflated levels of anxiety and depression in workers.

Critics of the gig economy – including many who work within it – have also cited the lack of regular pay, benefits, or sick leave as being exploitative.

However, others say the increased flexibility could provide freedom for people who want to have more control over their hours and work schedules.

Mr Alstrom says: ‘People around the world are feeling increased stress and anxiety over working environments, “always on” availability, and balancing childcare with work demands.

‘As we enter the post-pandemic era, they will likely demand more balance in their workload or hybrid workplace models that allow them to work from home and the office.

‘If they can’t achieve this, it will inevitably mean choosing gigs rather than a traditional career.’

Employers may also see benefits, with the report adding: ‘White collar workplaces have the opportunity to leverage key aspects of the gig economy by accessing top talent to build a contingent labour pool.

‘These pools of on-demand skilled workers can be valuable assets to special projects or to address specific needs within a traditionally employed team at critical junctures.’