An extraordinary scrapbook that belonged to a governor of Darlinghurst Jail and which features original artwork by prisoners including notorious bushranger Captain Starlight is shedding new light on the early years of the colony.

The book, containing clippings, photographs, pencil drawings and watercolours, was the property of Sir John Cecil Read and has been donated by his family to the National Art School, which now occupies the former jail in Forbes Street. Read was the jail’s governor between 1861 and 1889. 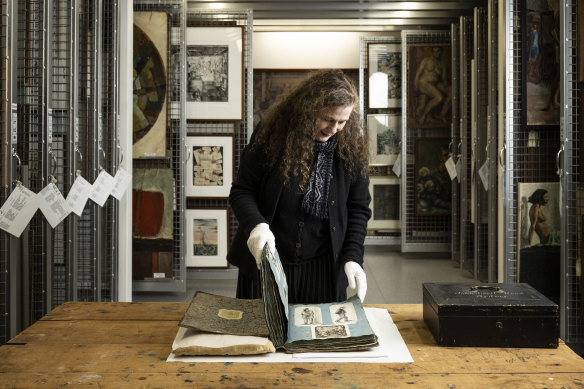 “Read was the longest-serving governor but I didn’t know anything else apart from that,” she said. “I certainly didn’t know his family were still here. And when they contacted me, it was thrilling. I was absolutely amazed.”

Initially, the family members thought the paintings and sketches in the book, many of which are signed, were merely reproductions.

“But when I had a good look at it, I was able to tell there is lots of original artwork and I could recognise some of the signatures,” said Beck. 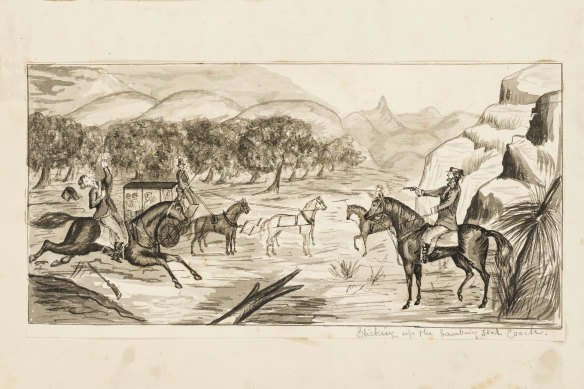 Sticking Up The Lambing Flat Coach: A pen and ink drawing by an unknown inmate from the scrapbook.Credit:

Several of the artworks bear the signature HLB, indicating they are the work of Henry Louis Bertrand, the so-called “mad dentist of Wynyard Square” who served 29 years for killing his lover’s husband.

“He was a very well-known prisoner and he was an artist as well,” said Beck. “He could work with watercolours and we think he taught other prisoners, including Captain Starlight, who was his friend in jail.”

Several of the watercolours, including some by Starlight, aka Frank Pearson, are copies of postcards depicting exotic locations a world away from the grey walls of the prison.

Read evidently encouraged the prisoners’ artistic endeavours, collecting their work for his scrapbook. He had a reputation of being tough but fair.

“He looked after the prisoners in that he introduced exercise for them and also started the manufacturing wing, where they made handwoven mats,” said Beck. “There was bookbinding and a tailor and they made their own shoes.

“He used to follow prisoners’ careers after they got out of jail to sort of make sure they didn’t come back.”

Read also demonstrated he was not a man to be trifled with when, in 1864, he ordered guards to fire on prisoners who attempted a mass breakout.

Beck has edited and contributed to a book, CAPTIVATE: Stories from the National Art School and Darlinghurst Gaol, that will be launched to coincide with a series of events and exhibitions to mark 100 years since NAS moved to the jail and 200 years since work began on the walls of the compound. Previously, she has written a history of the jail, called Hope In Hell.

She admitted one of the hazards of her occupation was constantly imagining the lives of the people who lived and died in the jail.

“When I was researching the last book, I could see people everywhere,” she said. “I’d imagine Louisa Collins [the last woman to be hanged in NSW] walking across to the gallows and examine the walls to find the spot where the prisoners tried to climb over.

“I’ve always had a real feeling for the people who came before us.”

A cultural guide to going out and loving your city. Sign up to our Culture Fix newsletter here.