Home » Lifestyle » ‘This is a carbon tax’: Angus Taylor takes a swipe at Business Council

Energy and Emissions Reduction Minister Angus Taylor has taken a swipe at the nation’s peak business group, warning that its call for Australia to slash its emissions by up to 50 per cent by 2030 could impose a carbon tax on business.

The Business Council of Australia on Friday released a plan for Australia to reduce its emissions by 46 to 50 per cent by 2030 against 2005 levels, up from the current pledge of 26 to 28 per cent, and to net zero by 2050, in line with commitments from a growing number of countries. 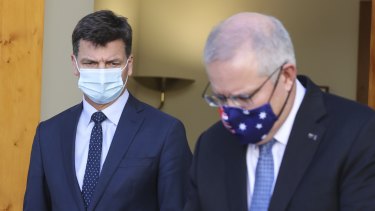 Prime Minister Scott Morrison is inching towards adopting a net zero target ahead of the COP26 UN climate summit in Glasgow next month, with calls from key allies such as Britain and from within the moderate wing of the Liberal Party for Australia to adopt more ambitious emission reductions targets.

Negotiations with the Nationals are about to commence over the emissions targets but already a number of MPs in the junior coalition partner have strongly signalled their opposition to net zero, setting up a clash within the government.

The BCA represents more than 100 of Australia’s largest businesses and, before the last election, the group warned Labor’s plan for a 45 per cent reduction by 2030 would be “economy wrecking”.

But now the business body is calling for emissions reductions just above that level, with a fourfold increase in renewable energy and a greater effort to embrace low-emissions technology throughout the economy.

In a statement on Saturday, Mr Taylor said the government “welcomes the BCA’s acknowledgement of policies the Morrison government have put in place through the Technology Investment Roadmap, the Modern Manufacturing Strategy, the Emissions Reduction Fund, and expanding the mandates of ARENA [the renewable energy agency] and the CEFC [the clean energy finance council]“.

However, “this report makes a number of recommendations that have concerning impacts for households and businesses. The analysis behind the BCA’s report ‘did not explicitly model specific technologies”’ or how much their cost of deployment would need to fall to avoid imposing new costs on the economy,” he said.

“The BCA’s recommendation to expand the Safeguard Mechanism and bring down baselines [emissions] would force companies to reduce their emissions, regardless of whether economically viable technologies are available, risking competitiveness and jobs – this is a carbon tax.

“The government has made clear that it will not be imposing a carbon tax on business by reducing Safeguard Mechanism baselines or expanding its coverage. We will set out a long-term emissions reduction plan before COP26.”

The Safeguard Mechanism provides a framework for Australia’s largest emitters to measure, report and manage their emissions.

Labor climate spokesman Chris Bowen said the “very significant” report from the BCA proved “what Labor has said all along – that the world’s climate emergency is Australia’s jobs opportunity”.

“Scott Morrison is so out of touch with the rest of the world, he’s so out of touch with Australian business and industry, the BCA, the National Farmers Federation, the irrigators, the Meat and Livestock Council, the Minerals and Exploration Council, [who are] all committed to net zero in most cases by 2050, and in some cases earlier.”