Home » Lifestyle » The women who travel the world by house-sitting

Homes in every country…they’re just not ours! The women who travel the world by house-sitting

We’ve all learned to work from home these past months, but what about working from someone else’s home — particularly if it happens to be in a glamorous, far-flung location?

For, as travel restrictions ease, there’s demand once more for trusted house and pet-sitters — and plenty keen to do it.

After all, it’s a free ticket to stay in luxury homes around the world, glass of champagne in hand.

So, could house-sitting be the ultimate dream job? Here, four long-term sitters tell SADIE NICHOLAS why they love to WFAH (that’s work from another’s home . . .)

MINDING HOUSES HAS LET ME HOP AROUND GREEK ISLANDS

Suzie Young, 44, is a digital consultant. She is single and is currently house-sitting her way around Greece.

SUZIE SAYS: Whether I’m in Athens, Naxos, Paros, Mykonos or Santorini, I open the windows each morning to blue skies, sugar-cube houses, the scent of pine, and at least one cat or dog at my feet.

I began pet-sitting in 2017 after selling my home in Nottingham to find adventure. I was a digital consultant and my clients were global, which meant I could be anywhere.

I put my possessions into storage, joined a house-sitting website and had my heart set on heading to Spain, but ended up in London.

Of course, property prices in the capital are extortionate but house-sitting lets me live in homes I could never afford. 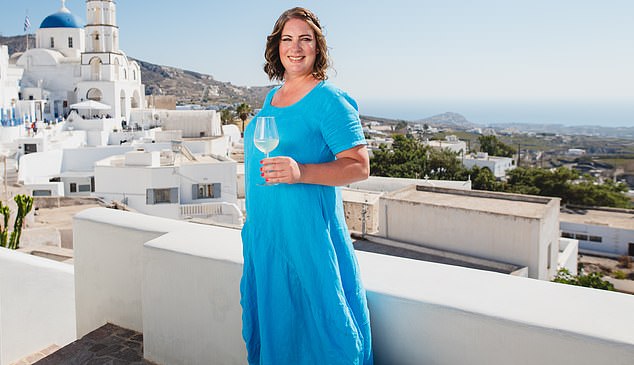 Suzie Young, 44, is a digital consultant. She is single and is currently house-sitting her way around Greece

Most impressive was a £1 million apartment in Holland Park with floor-to-ceiling windows and deep-pile carpets that swallowed my feet.

A close second was a penthouse in Kew with views of the Thames and Kew Gardens.

After that, in northern Italy I looked after two cats in a villa near Varese with stone floors, olive trees and a stream in the garden.

In France, I sat at a farm with horses, goats, chickens and dogs while the family attended a wedding. The owners paid for my flights.

However, I don’t get paid for house-sitting, my income is from my consultancy work. Pre-Covid, I was averaging five days a month when I didn’t sit, and sometimes there’d only be one night between sits.

Sitting requires planning to ensure I have somewhere to go when one sit ends — I no longer have a home in the UK and am not close to my family, so I base myself in rented, serviced apartments in London between sits.

My last house-sit in the UK before lockdown was a cottage in Devon with beamed ceilings, an open fire and a garden.

Then, last autumn, when restrictions eased and demand for house-sits returned, I upped sticks to Greece where I looked after a villa with sea views, marble floors, and a huge dining table beneath a pergola in the garden.

I love Greece so much that I applied for residency, which means I can stay for five years — during which time I’ll continue travelling and house-sitting around the country.

I’M SPENDING THIS AUTUMN BY THE BEACH

Claire Brummell, 41, is a business consultant from Kent and is single.

CLAIRE SAYS: I’ve been house-sitting for seven years since my then boyfriend’s businesses collapsed and we were no longer tied to London.

While we figured out what to do next, friends suggested we should look into house-sitting.

We joined various house-sitting websites and six weeks later arrived in Costa Rica for our first sit, following an interview over Skype with the owners. 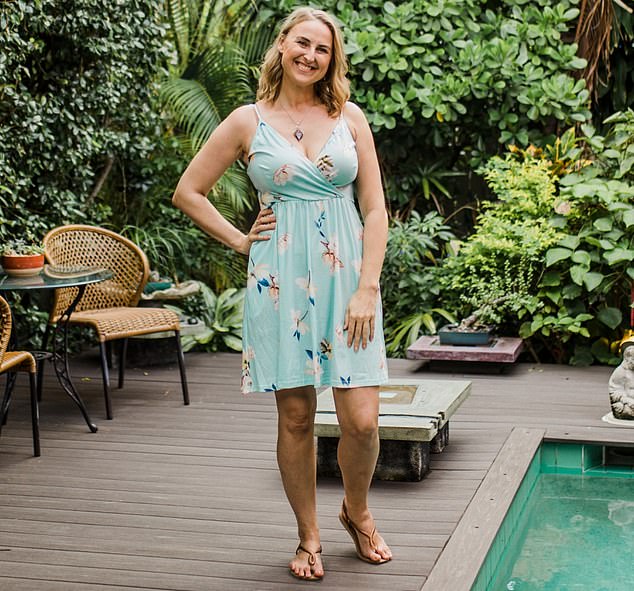 Claire Brummell, 41, is a business consultant from Kent and is single

Costa Rica was stunning with beaches, mountains and jungle within a ten-mile radius of the property, which was owned by U.S. expats and had a four-acre garden, plunge pool and two dogs.

Since then, I’ve experienced every type of home imaginable including a gated, 18-bed villa in Brazil with a huge pool, on-site security and domestic staff.

It’s impossible to give an average of how many months a year I house-sit as every year is different, but it’s usually at least a few months.

Families entrust me with their homes and adored pets, and I take house-sitting very seriously, but always insist on the use of a car so that I can get somewhere in an emergency, and wifi so I can work.

Currently I’m in Key West, Florida, in what is probably my favourite property ever.

When I started house-sitting I anticipated that the huge, English country houses would excite me most, but having stayed in many that feel characterless and unhomely (and the cleaning is endless!) it’s the cosy properties I love.

This American home is the perfect size with a plunge pool and garden full of palm trees and orchids. I’m here for a couple of months and, unusually, there are no pets to look after.

When I’m not doing domestic jobs or running my business, I do yoga on the beach or head out to sea on a friend’s boat, sailing among the dolphins.

But Key West isn’t always so peaceful. A few years ago I was sitting at a beautiful property with a big outdoor pool when we received warnings a category five hurricane was heading our way.

We frantically nailed down shutters and doors, and moved the owners’ belongings upstairs in case of flooding, before a mandatory two-week evacuation to Atlanta.

When we returned, we had to repair the roof, dredge the pool and buy a chainsaw to remove fallen trees — owners are always happy to reimburse any emergency expenses as long as I agree it with them first.

When my partner and I split up five years ago I questioned whether I wanted to continue house-sitting alone because of the challenges it can present — snakes, hurricanes, you name it! But for me it’s not a job or one long holiday, it’s a wonderful lifestyle.

Although I don’t get paid to house-sit, the flights and insurance to be in Key West for two months cost less than £1,000, paid for from my business income.

I couldn’t rent a house as nice as the one I’m staying in for that, and when I’m back in the UK I’ll stay with my family until my next house-sit.

IT MAKES ME FEEL LIKE THE LADY OF THE MANOR

Amrita Lal, 31, lives in London, works in marketing and has been house-sitting for ten years.

AMRITA SAYS: Stepping out of a recent house-sit to walk the owners’ Labradors while they were in Spain felt like being lady of the manor for a week.

The property was on a private estate in the Cotswolds with gardens, four large bedrooms, chandeliers and limestone floors.

It was a world away from the London flat I rent between house-sits, and a stark contrast to the property I house-sat last week. 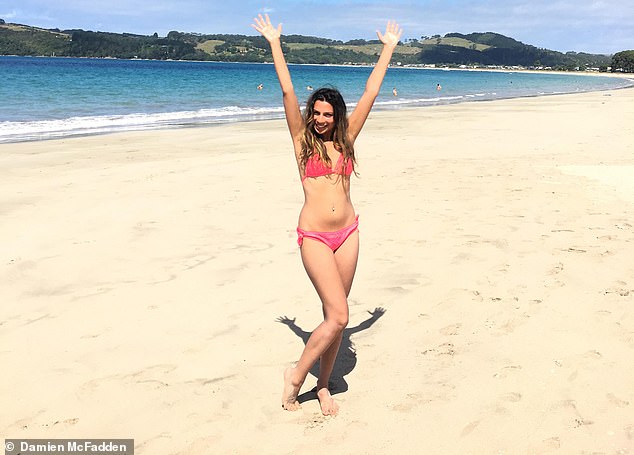 Amrita Lal, 31, lives in London, works in marketing and has been house-sitting for ten years

The owners had incorporated a deck with a tropical garden for entertaining, high-tech features such as a robotic lawnmower, and art collected on their travels.

I’ve dipped into various lifestyles, from a farmhouse near Bath with 15 chickens, a cat and a garden full of vegetables, to a flat in central Mumbai, India.

But the most memorable was a four-bedroom beach house in New Zealand where all I could see was sand and the ocean.

But for all the perks, families put huge trust in me and sitting is a big responsibility. There have been dogs that want to eat everything, and some that get anxious. And I spent one weekend bailing water out of the guttering at one house.

People are surprised I house-sit, but they’re also supportive as they know I love animals and travel, and have a full-time job.

Recently, most house-sits have been in the UK, but I’m planning to start travelling now restrictions are easing, including looking after four cats in Sicily over Christmas.

Angela Laws, 74, a retired marketeer, lives near Glasgow with her husband John, 76, a retired petroleum engineer.

The owner, who’d been president of a global advertising agency, had bought it from the Kennedy family and received 140 applications when she advertised for a six-week house and pet-sit one winter. 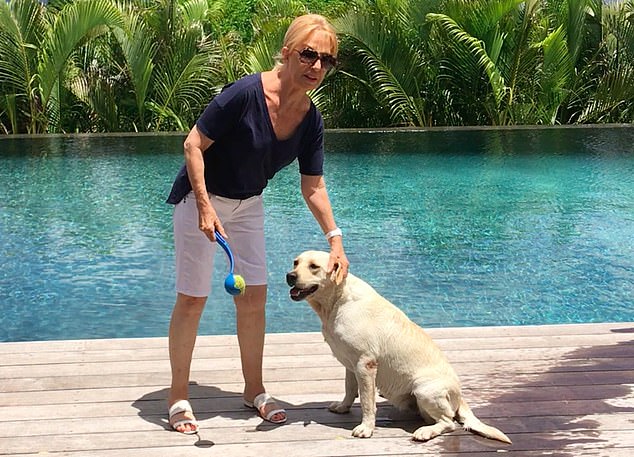 Angela Laws, 74, a retired marketeer, lives near Glasgow with her husband John, 76, a retired petroleum engineer

John and I were chosen and had the most incredible time exploring New York with the more sprightly of the lady’s two dogs, a labradoodle named Alfie.

So luxurious was the apartment block that we’d press a special button on the elevator as we were leaving and — hey presto! — a cab would be waiting for us when we got downstairs.

The owners sold it four years later and bought the most beautiful home in San Diego, which is where I should be house-sitting right now, but for U.S. travel restrictions.

I fell into house-sitting ten years ago after my beloved springer spaniel Holly died. Our pet-sitter suggested I help her care for other people’s animals to channel my grief.

Since then we’ve done 200 house-sits through trusted housesitters.com, a subscription-based platform where everyone pays annual membership and no other money changes hands. 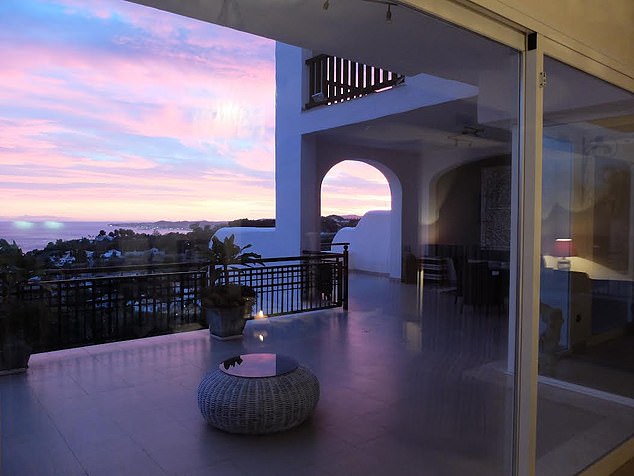 Our longest house-sit was in a spectacular villa overlooking the Mediterranean in Spain — not a bad place to spend eight months!

Sitters sit for free, we pay our travel and related costs, and have the enormous privilege of staying in other people’s homes, caring for their beloved animals.

Pre-pandemic we house-sat for 52 weeks a year, but this year we’ve only done 12 weeks.

We hope soon to replicate more of the wonderful experiences we’ve had over the years.

Take the amazing three-week sit we did for a family in France at their huge coaching house.

They were grape growers who supplied many of the champagne houses and stocked their fridge with fine champagne for us as a gift while we were caring for their dogs.

Closer to home we looked after a chocolate box-thatched cottage in a Suffolk village and a luxury house in Surrey where our charges were an ageing Labrador and three kunekune pigs, one of whom always came into the house for dinner.

Further afield, we escaped the British winter to spend three months at a house in Brisbane, Australia, with an outdoor kitchen and use of the family’s convertible car. 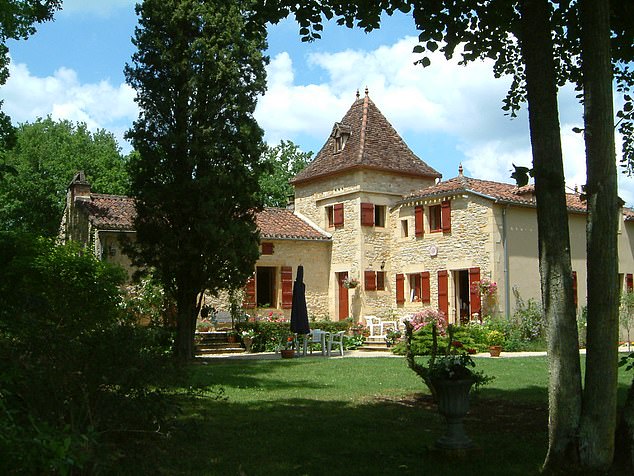 Pre-pandemic we house-sat for 52 weeks a year, but this year we’ve only done 12 weeks. We hope soon to replicate more of the wonderful experiences we’ve had over the years. Take the amazing three-week sit we did for a family in France at their huge coaching house (above)

Then there were three sits in Barbados, including a gated, ocean-front villa with four bedrooms, an infinity pool and huge terraces for entertaining.

They had cleaners, maids and gardeners, which meant we could focus on the Labrador.

Our longest house-sit was in a spectacular villa overlooking the Mediterranean in Spain — not a bad place to spend eight months!

Our children and their partners flew over and joined us for a Spanish Christmas at the invitation of the owners.

Of course, there have been challenges, including a huge swarm of wasps in the dining room of a cottage where they’d nested in the roof, and water gushing through the ceiling in a beautiful London home.

They’re among the reasons owners choose the security of having someone in their home while they’re away, so problems like this can be spotted and dealt with straight away.

We adore being able to travel and indulge our love of animals.