Her Majesty’s reign(bow): Ahead of the Queen’s funeral, FEMAIL celebrates her vibrant wardrobe that ensured her subjects could always spot her in a crowd

They say fashion comes and goes, but style lasts forever.

That was certainly the case for the Queen, who developed a singular fashion formula that she swore by for more than 70 years.

The Queen, who will be laid to rest tomorrow, became a master of ‘colour block dressing’ – wearing a single shade from head to toe.

The eye-catching colours helped the diminutive 5ft 4in monarch stand out when she was meeting her subjects. Even those stuck at the back of a crowd couldn’t fail to miss their Queen when she was standing in a tangerine orange coat with a hat to match. As she once said: ‘If I wore beige, nobody would know who I am.’

At international events, she chose colours that implied no allegiance to a single flag because she believed it was her duty to remain respectful to all. When on a royal tour, she used to give a nod to her hosts by stepping out in their national colour. 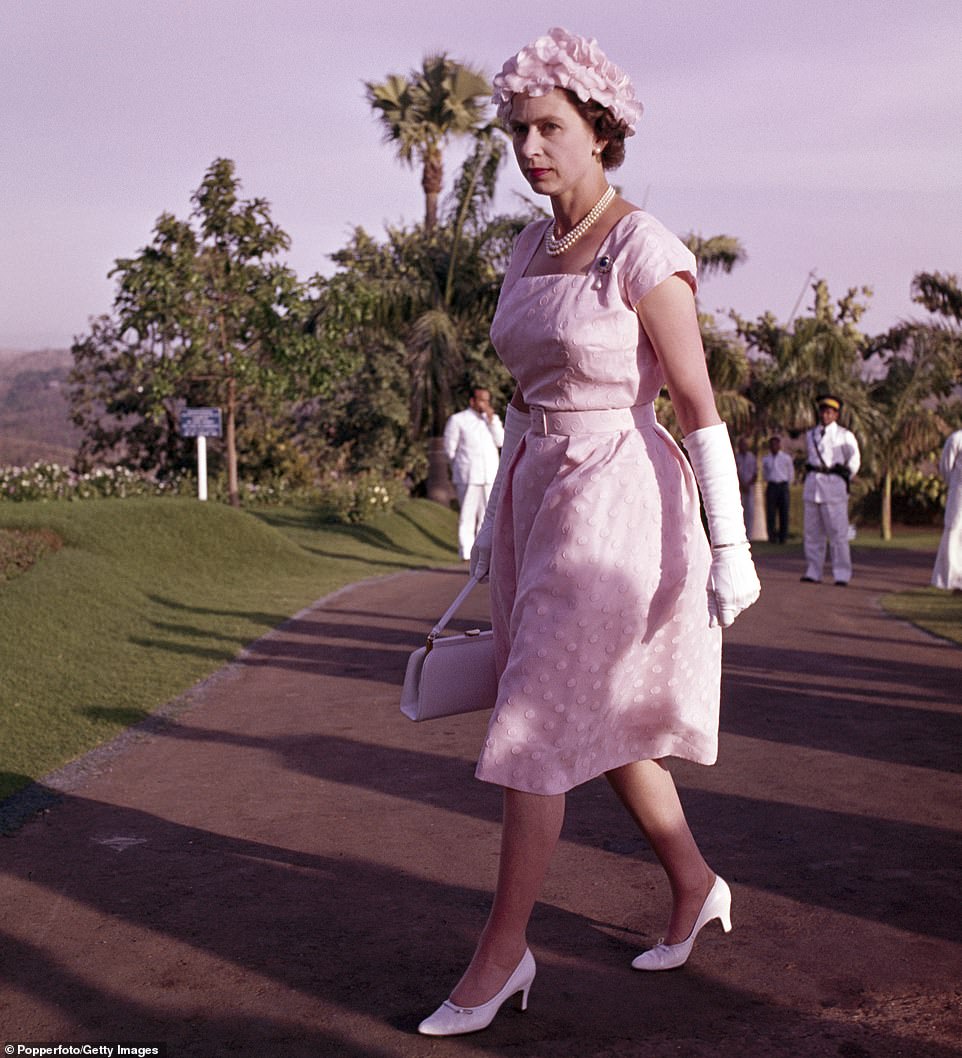 In the pink! The Queen steps out in a soft rose dress and matching floral hat on the royal tour of India in January 1961

Simply dotty! The Queen in a polka dot yellow dress and matching turban in Mexico, 1975. Right, going to church in 1989 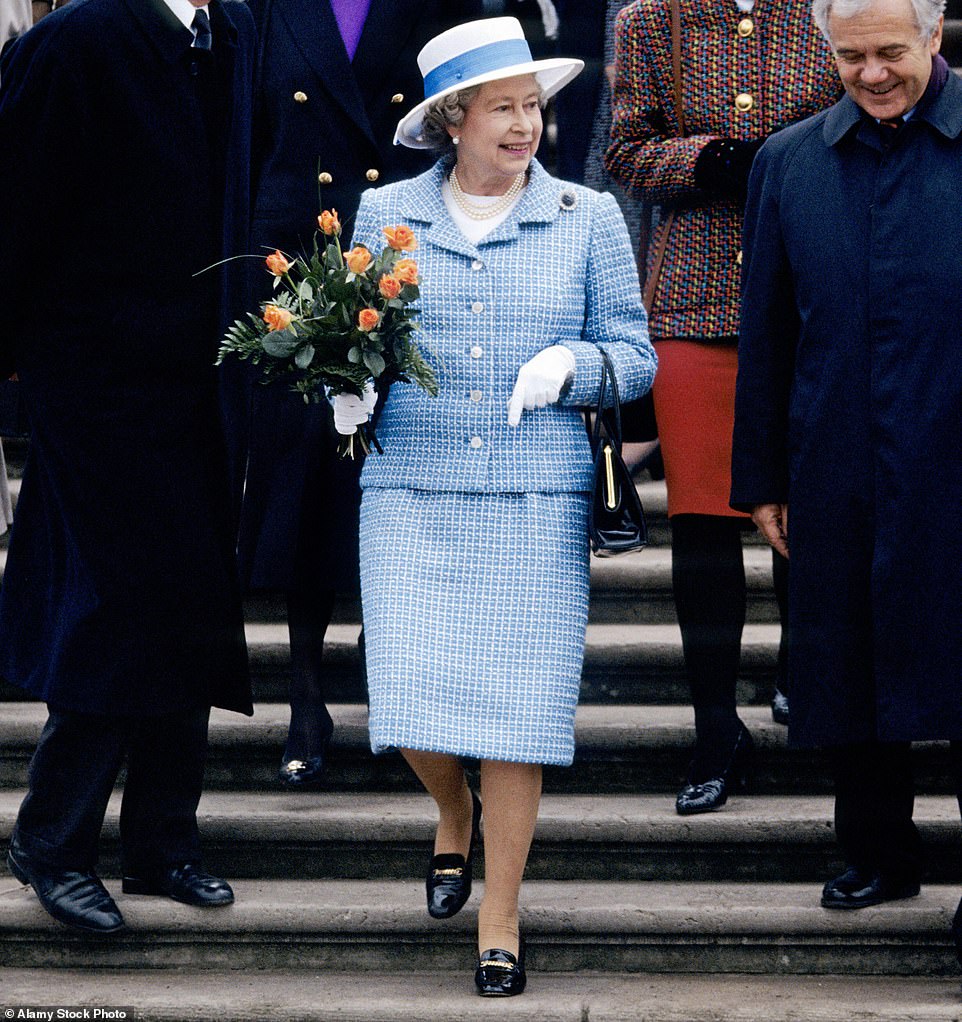 True blue! It was a blue tweed suit and coordinating hat for an outing to the San Souci Palace Berlin, Germany, in 1992

Purple reign: The Queen opted for a subdued mauve shade for George W. Bush’s visit in 2003. Right, in London in 2018 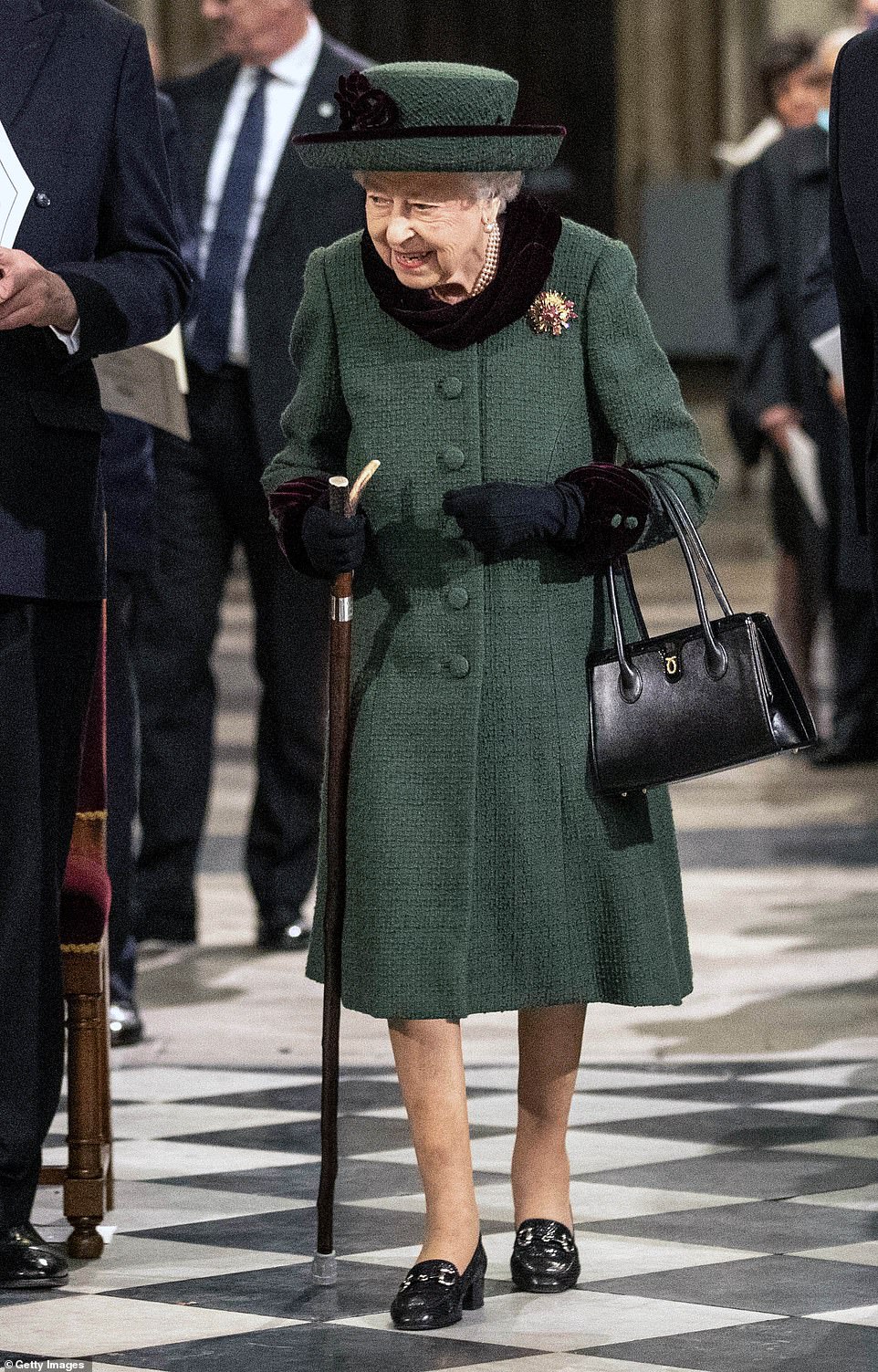 A tribute to Prince Philip: The Queen wore her husband’s livery colour for his service of thanksgiving in London in March 2022

In her youth, Her Majesty was more experimental in the styles, shapes and fabrics she selected, from turbans and opulent furs to short-sleeved dresses cinched tightly at the waist.

In more recent years, she relied on simple, shin-length coats, often worn over a dress.

Over the years her tastes may have changed with the times but she was always immaculate.

You never saw her with a hair out of place, a wrinkle in the fabric of her outfit; no dropped hemlines, visible hat pins or scuffs on her heels.

The woman behind this meticulously considered kaleidoscope of colour was the Queen’s dresser Angela Kelly, who had been by Her Majesty’s side for 30 years.

As she told the Daily Mail: ‘The Queen loves clothes and is a real expert on fabrics. It’s not been me teaching the Queen — it’s the other way round.’

Here, ahead of her final journey, FEMAIL remembers some of her most eye-catching looks… 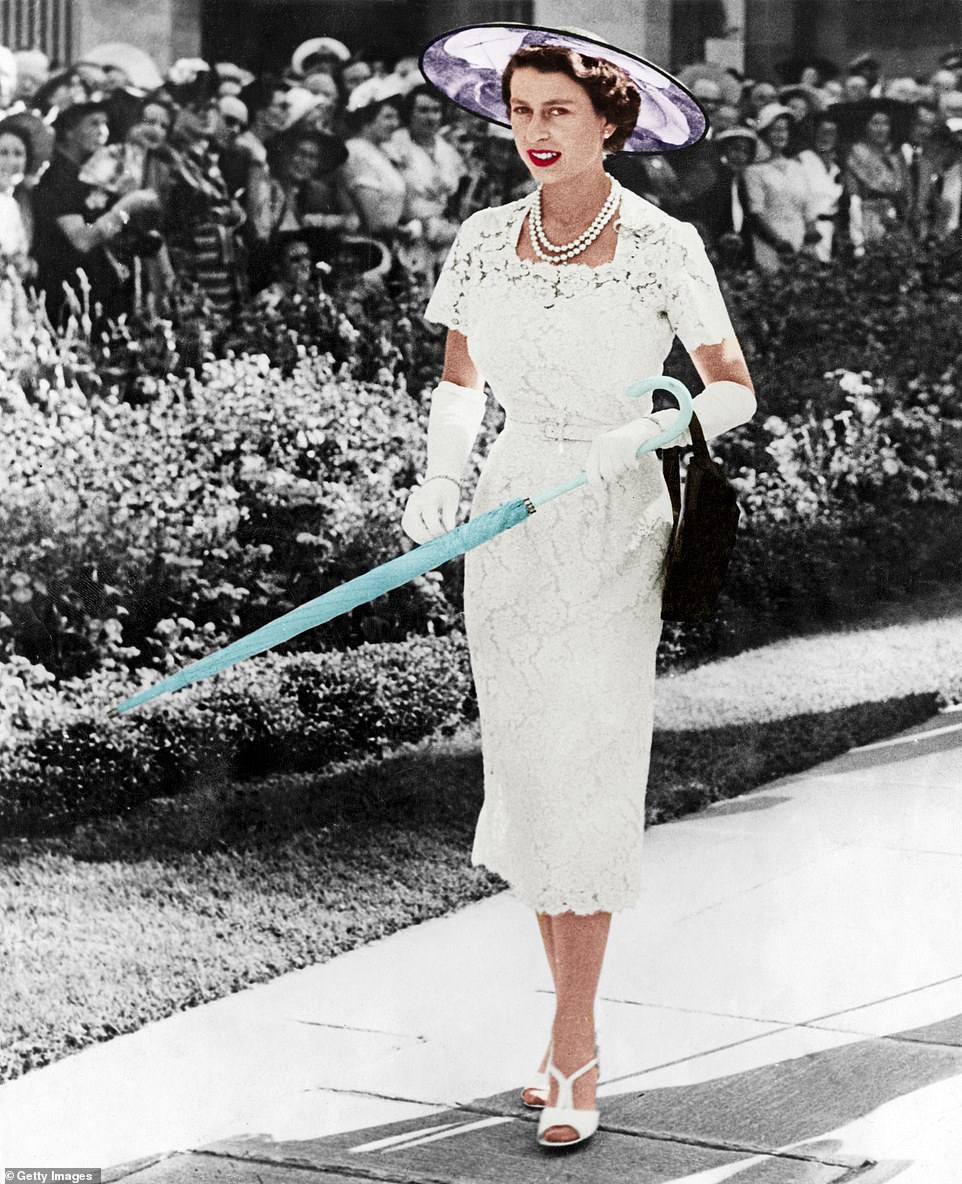 A bit of all white! The Queen in a slim-fitting white dress at a garden party in Sydney, Australia, on the 1954 royal tour 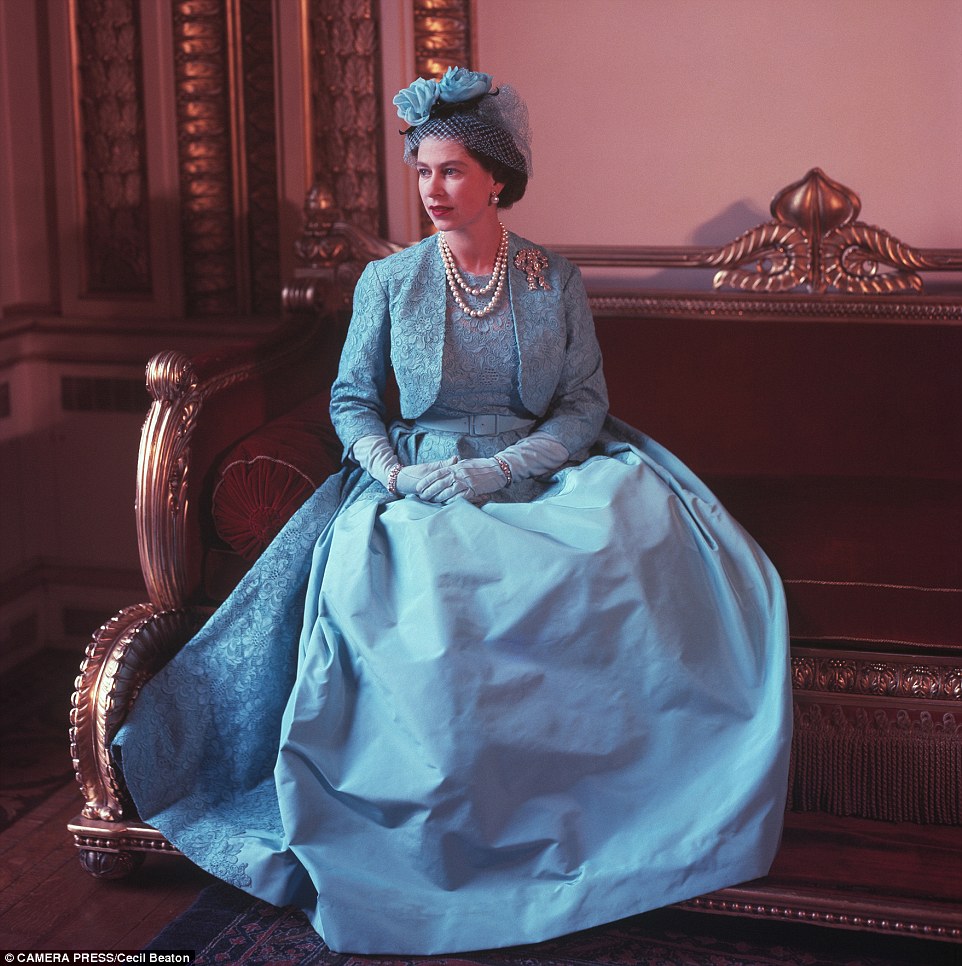 Blue beauty: This stunning portrait by royal photographer Cecil Beaton was taken on the day of Princess Margaret’s wedding in 1960, less than three months after the Queen had given birth to Prince Andrew. The full skirt emphasises the monarch’s small frame, while the lace on the bolero jacket is feminine and delicate 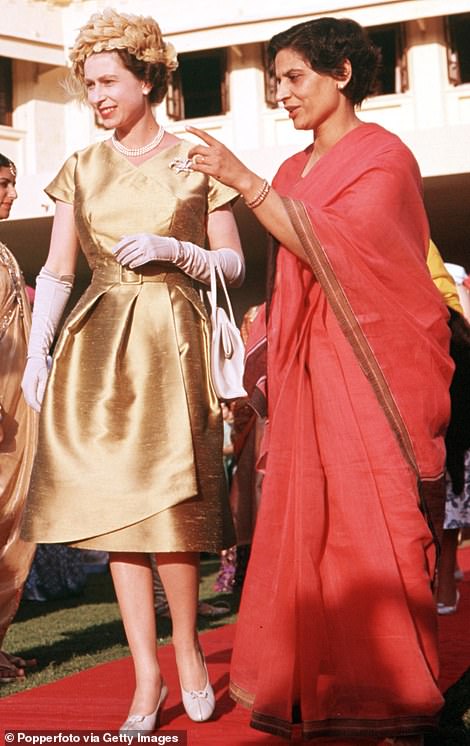 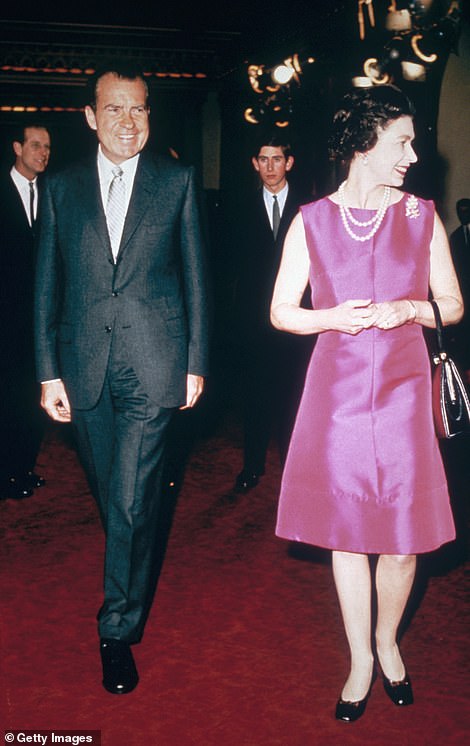 Golden girl: The Queen at a costume parade in Karachi in 1961 (left) and in pink with Nixon and Prince Charles in 1969 (right) 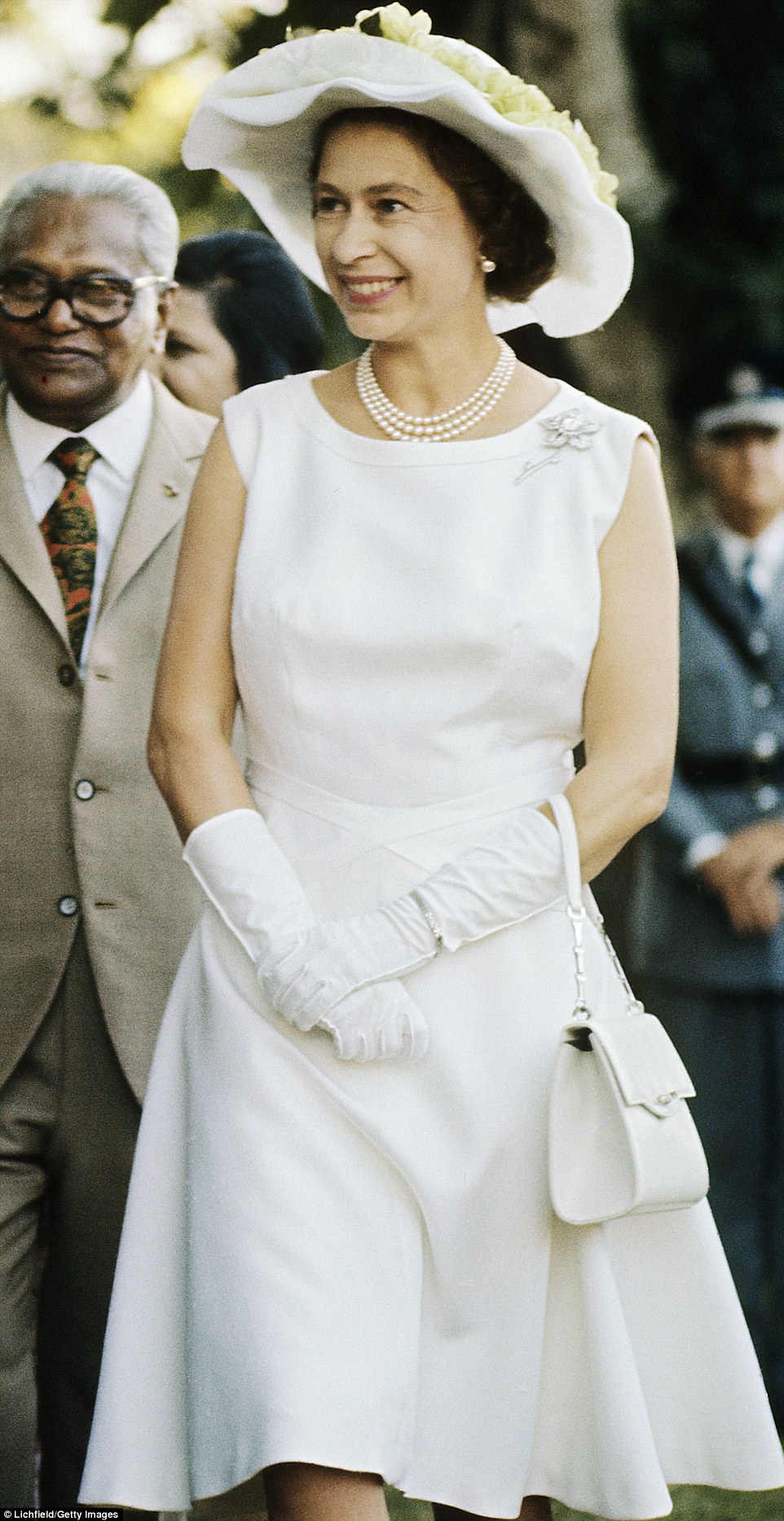 Dressing for summer: A rare glimpse of bare arms and another above-the-knee dress in this all-white outfit by royal couturier Norman Hartnell. Worn on tour in Mauritius in 1972, the crossover waist showed off her slim figure, while the yellow flowers on her hat were a nod to her sunny surroundings

Off to the races! In a green silk frock with matching hat at Ascot in 1973. Right, in purple polka dots in New Zealand in 1977 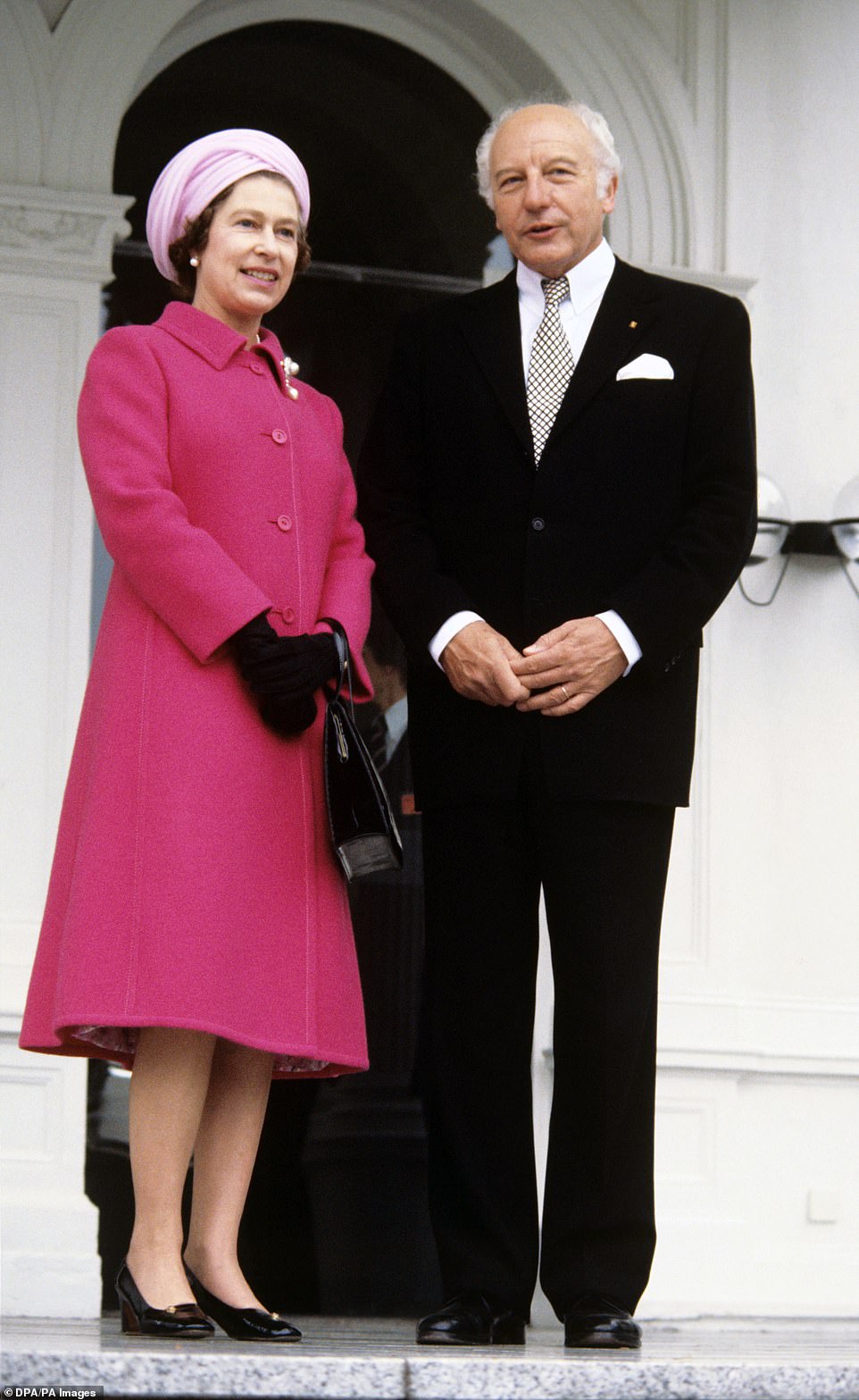 Bright and beautiful: The Queen in red on a tour of Switzerland in 1980. Right, in lilac at the Braemar Games in 1983 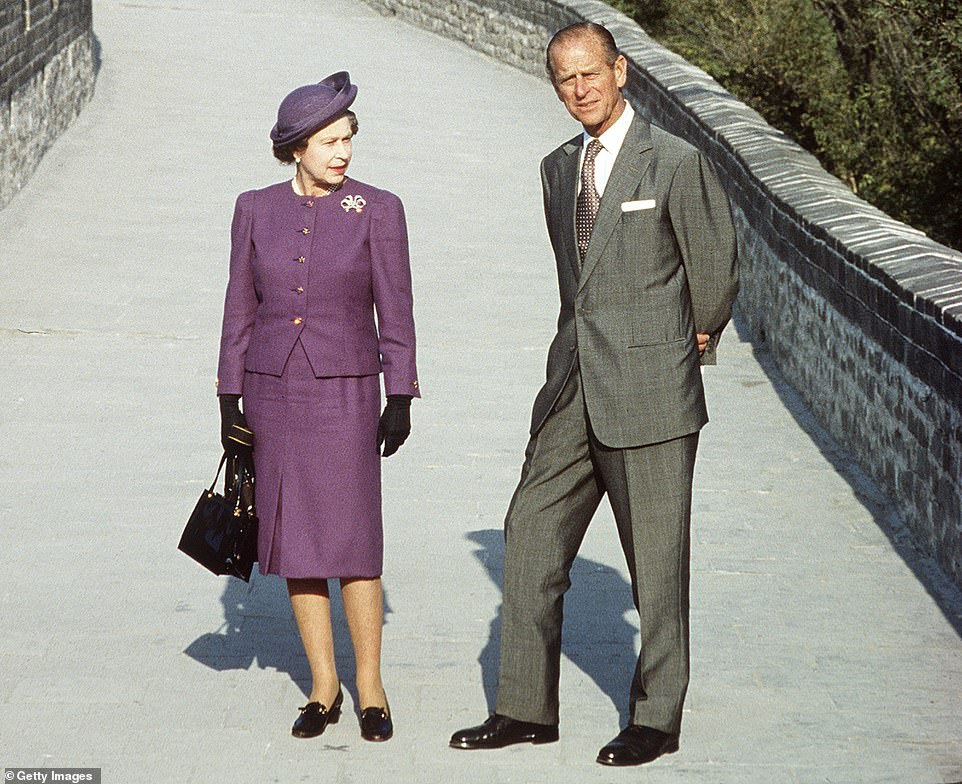 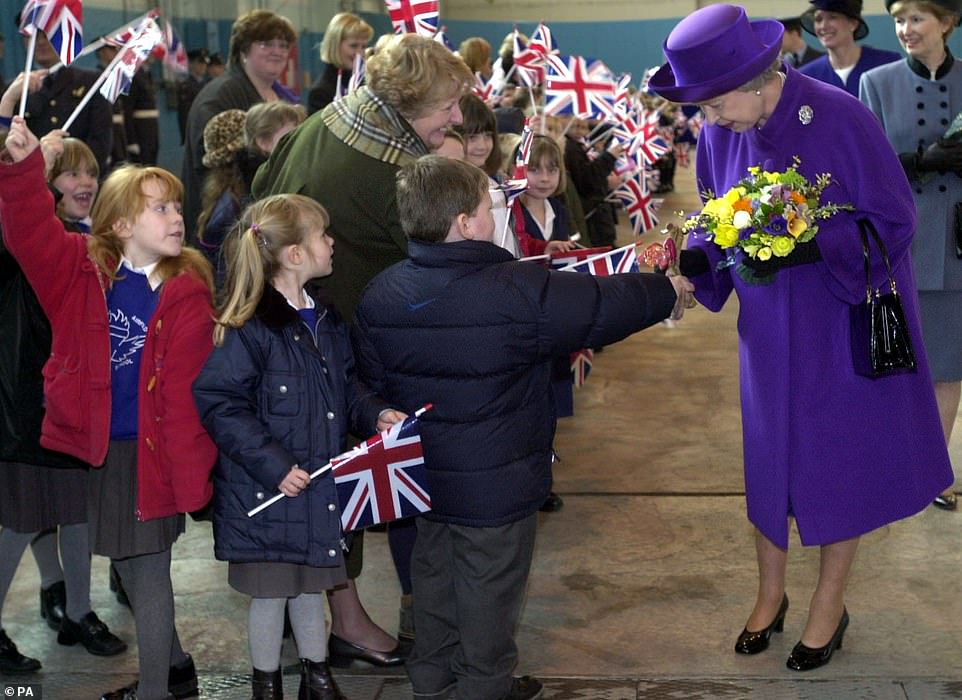 Magenta majesty: The Queen in a vibrant purple coat and matching hat as she visits RAF Marham in Norfolk in 2000

50 shades of pink! The Queen in fuchsia in Southampton in 2004 and a soft powder pink at Westminster Abbey in 2008 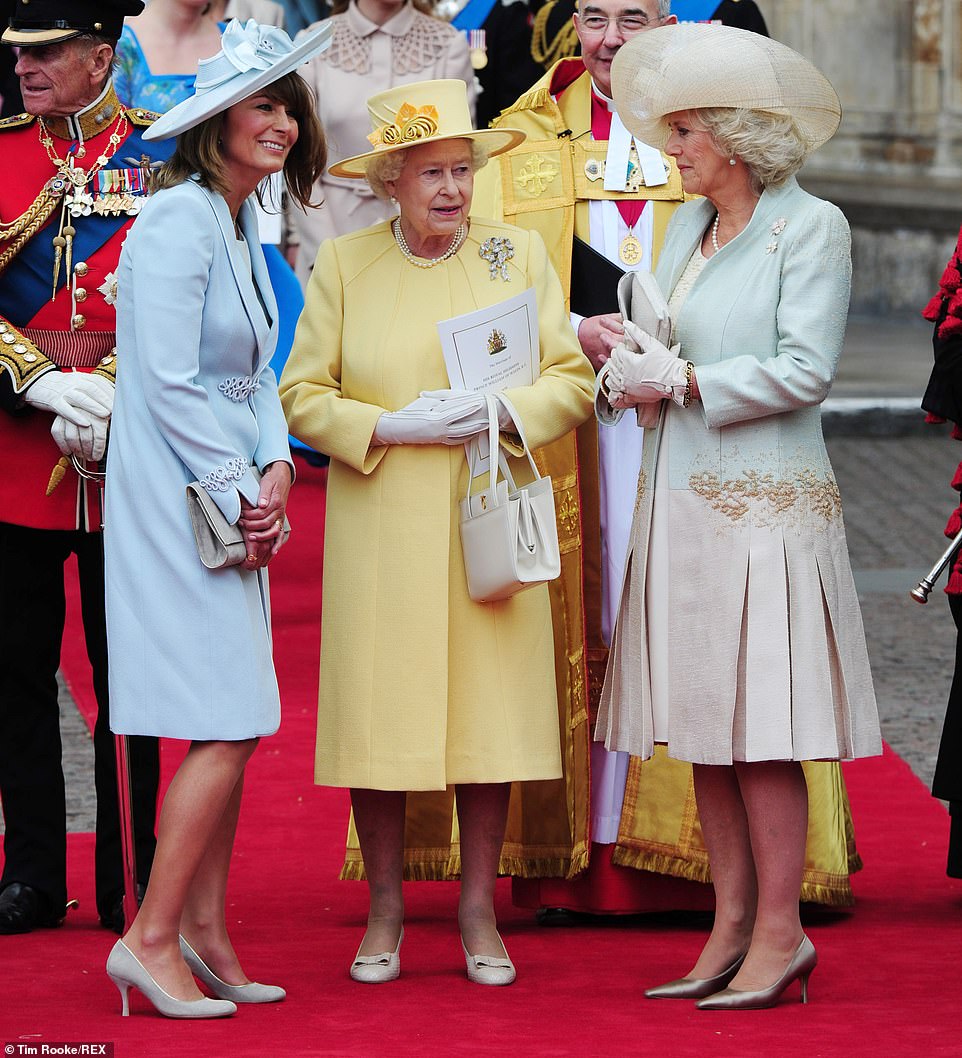 Ray of sunshine! The Queen wore an elegant yellow coat and hat for the Duke and Duchess of Cambridge’s 2011 wedding 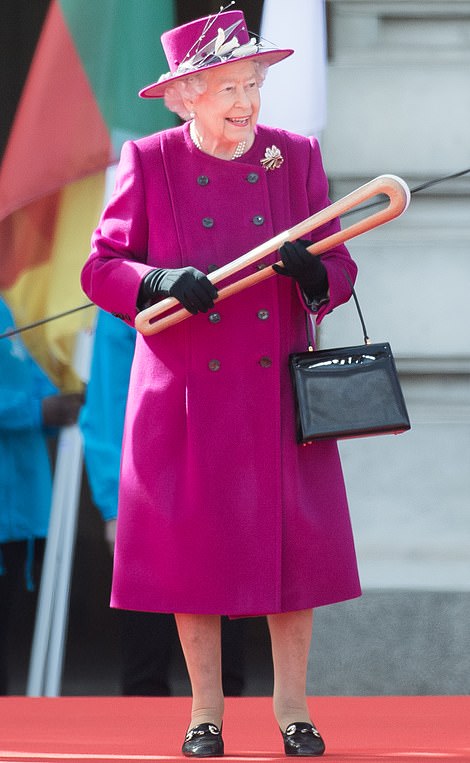 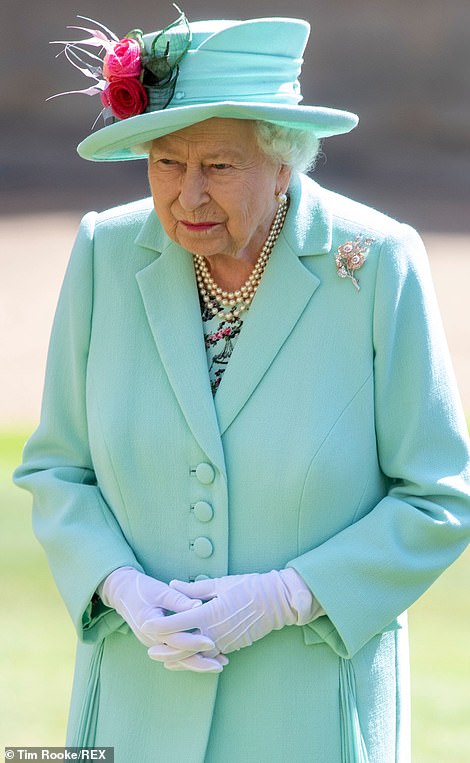 Eye-catching ensembles: The Queen at Buckingham Palace in 2017, left, and in aqua at Windsor Castle in 2020 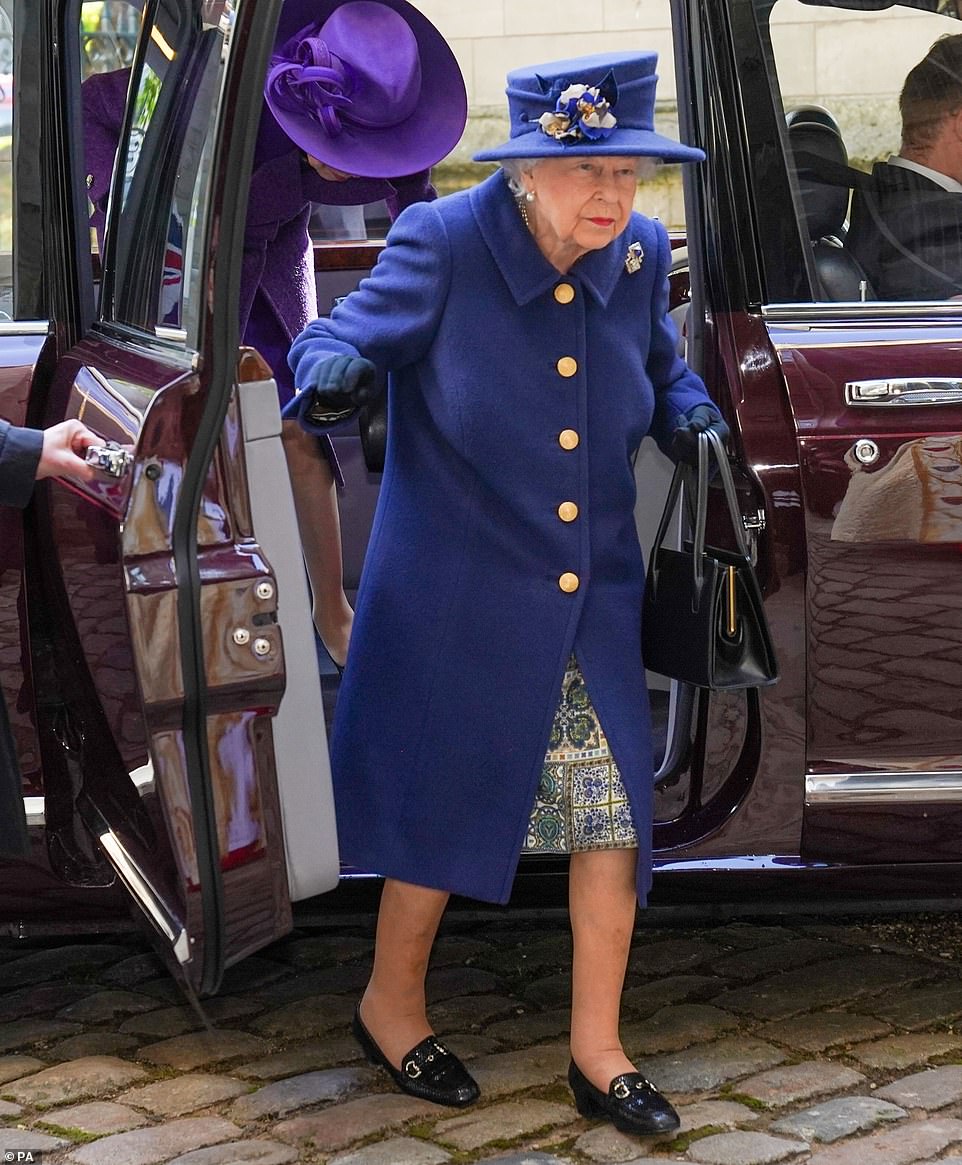 Utterly blue-tiful: The Queen arriving at Westminster Abbey for a Service of Thanksgiving in October 2021