In 1981, when he was 15, David Frazer and his mate Garry went to a Tom Waits concert at Melbourne’s Dallas Brooks Hall. A teacher had introduced them to the music of Waits, whose voice has been described as everything from a swallowed angry cat, to crunching broken glass, to sounding like it was soaked in a vat of bourbon (then smoked, then run over by a car).

The concert had an epic effect – Waits’ lyrical story-telling had “a rural feeling of melancholy and alienation” that resonated with Frazer, whose childhood was spent in the Wimmera. But his admiration for Waits transcended the aural: Frazer was intrigued by the imagery the music produced. 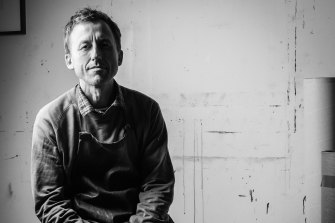 David Frazer in his studio in country Victoria. Credit:Sean McKenna

Decades after that concert, Frazer has been granted permission to create an artist-book transforming Waits’ music into pictures. The timing is great: the Castlemaine artist is about to launch his latest book, Love Letter, on the song by Nick Cave. The book has the musician’s blessings – Frazer says Cave was thrilled with the results – and its limited edition copies bear his signature.

Love Letter follows others on Paul Kelly’s Little Aches and Pains in 2014 and Don Walker’s Pool in 2017 – a roll-call that reveals Frazer’s interest in musicians with especially distinctive styles. He says he chose the artists because while they’re “blokey” they are “not afraid to be sensitive and honest, they’re not afraid to put their heart on their sleeve”. 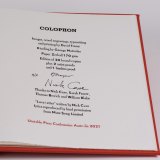 Frazer’s artist-books reinterpret the songs, or fragments of songs, as wood-engravings – a form of printmaking in which the artist engraves images into blocks of wood, inks them up and runs them through a press on to fine-quality paper. Each page is separately hand-printed and no modern technology is used.

“I love old-fashioned technology,” Frazer says. He owns a 170-year-old iron hand-press (a Columbian) and a 60-year-old proofing press (a Farley). “In a sense, I am the same as Thomas Bewick [1753-1828] the wood engraver. He was doing it better than me, but I am doing the same thing. And I don’t have to update software!”

The images in the books seem uncomplicated, yet they do not merely illustrate the lyrics. Rather, they inhabit the poetry conveyed by the musicians’ extraordinary voices and melodies; the nuanced imagery amplifies their music and accentuates emotional qualities. 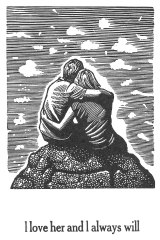 The Cave, Kelly and Walker books, which each took about three years, are published by Frazer’s Unstable Press in limited editions (up to 20 books). The printmaking process means each individual book is an artwork in its own right, with subtle differences between versions. The Waits book, which Frazer expects to finish next year, follows the same process.

The genesis of this continuing project goes back beyond the 1981 Waits concert: Frazer recently came across a childhood sketchbook containing cartoons he made for and about his family. “They were very funny, and insightful about the human condition,” he says. “That is what I am still about: human nature, the story-telling and expressing a bit of humour, love and empathy.”

When he went to art school, Frazer knew he wanted to be an artist of some sort but “I probably would have preferred it if I could have been a rock star with an international career”.

“I tried to do it but I wasn’t very good. I was more a joke karaoke act. I couldn’t write songs other than the occasional stupid ditty and I wanted to write songs where people would cry and be moved. And, also, I wanted to be chased down the streets by fans. I decided to focus on giving art a shot instead.” 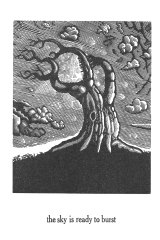 A page from Love Letter.Credit:David Frazer

When he did honours in printmaking, he discovered wood engraving. With its long history as the traditional form of illustration in books and newspapers, wood engraving seemed perfect. “It just blew my mind because it suited storytelling, cartoons, book illustration and poetry. It was the closest thing in the art medium to writing a song. I took to that and started doing melancholic little stories.”

After some time, he decided it would be good to combine one-off wood engravings into books; he met bookbinder George Matoulas and started using old-fashioned type. He tried to collaborate with fiction writers but it never quite worked: “I think novelists are very precious about their words. Musicians are more open to people covering their songs and adapting. Musicians like their songs being associated with the fine arts.”

When he became friends with Cameron Bruce, keyboard player for Paul Kelly, he approached the singer about making art with his songs in mind. Kelly agreed. “He put faith in me to do his work justice.”

For the Waits project, Frazer is using fragments from three songs: The Last Rose of Summer, Take it with Me and The Briar and the Rose. “It is difficult selecting a song. I like a song that has emotional impact and is moving but that doesn’t necessarily translate into making images,” Frazer says.

Once he has chosen a song, Frazer does multiple sketches, pins them up like cartoon strips, listens repeatedly to the music, and lets it all ferment – this can take a lot of time before he is ready to start engraving in wood. All the time, he is trying to capture the essence, something heartfelt and empathetic. “I am always trying to get things simpler. You are trying to say the same thing but with less.” 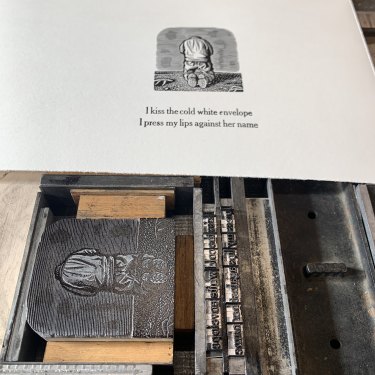 Blocks, type and print on the press for David Frazer’s Love Letter.Credit:David Frazer

What he likes about Waits’ work is that the songs often glorify a loser or misfit, making beauty of their misfortunes. Unlike his previous selections, which reminisce about a lost girlfriend, the Waits lyrics are about a long-term partner. “It’s more about sticking together and getting old,” Frazer says. He thinks this is a nice connection to Waits, who has been married to Kathleen Brennan since 1980.

With simplicity at the heart of Frazer’s endeavours, it is little wonder his studio has an uncomplicated mood of industry, with worktables, presses and tools, and the warm and not unpleasant odour of drying ink. The bush is nearby but the wood Frazer uses comes from afar: he imports blocks of English box and lemonwood from British engraver Chris Daunt, who supplies only traditional end-grain blocks to order.

Inside his well-lit workspace, Frazer says he is happy, even during lockdowns; he doesn’t feel guilty about being unsociable. “And my style has loosened up a bit,” he says. “After 30 years, I feel I’m doing the work the way I want to do it.”

David Frazer’s Love Letter, signed by Frazer and Nick Cave, is being launched by Australian Galleries ahead of an exhibition later this year. Pre-purchases can be made through [email protected]