Sarah Copland’s world transformed a year ago. Her son, Isaac Oehlers, was singing nursery rhymes as she fed him dinner when the port near their home in Beirut exploded.

Now she is fighting for justice to make sure the world doesn’t forget the deaths of two-year-old Isaac and the 217 other victims of the blast. 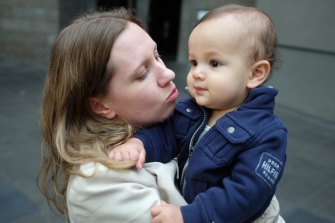 Two-year-old Isaac Oehlers with his mother Sarah Copland. Isaac was the youngest victim of the Beirut blast on August 4, 2020.

More than 7000 people were injured and 33,000 apartments destroyed in the explosion on August 4, 2020. It’s believed there were more than 2700 tons of ammonium nitrate stored alongside other flammable items in the busy commercial port that exploded.

Ms Copland wants the Australian government to back a push for the United Nations Human Rights Council to launch an international investigation into the disaster.

She says the domestic Lebanese investigation is a “sham” rife with delays and political interference.

“This is the result of extreme corruption and negligence, and it will be difficult to achieve an outcome,” she said.

“But I realised … if we don’t try and fight for justice, then it’s basically saying that these people could blow up a city and they can do what they did to Isaac and all of the other victims and by not fighting, we’re sending a message to say that it’s okay.

“He was sitting at home, having dinner like children are, just sitting in his high chair singing nursery rhymes when he was killed. And that’s not right.” 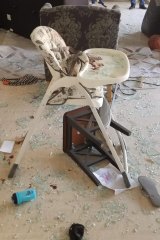 The apartment of Sarah Copland, Craig Oehlers and their son Isaac in Beirut after the explosion at the nearby port.

She and her husband Craig Oehlers moved to Lebanon in 2019 for her job with the United Nations. She says Isaac thrived in Beirut, picking up Arabic and French and delighting the locals with his confidence, bravery and intelligence.

“But above all, Isaac was loving and affectionate. I feel a physical pain at the thought that I will never receive one of his hugs again,” Ms Copland said.

The family was weeks away from returning to Australia so Ms Copland could give birth to their second baby when the explosion happened.

International organisation Human Rights Watch has been leading the push for the UN-led investigation, with the aim of seeking a resolution at the UNHCR’s next session in mid-September.

It will launch a report this week to coincide with the anniversary of the blast that lays out some evidence of the official conduct that allowed dangerous material to be stored haphazardly at the port.

“The investigation into the Beirut port explosion has not been effective, reflecting the broader culture of impunity for officials in Lebanon,” Human Rights Watch’s acting Australia director Laura Thomas said.

“The [UNHCR] should heed survivors and families’ calls for a process that can achieve accountability in Lebanon.”

Australia is not a UNHCR member but it could sponsor a resolution or use its diplomatic heft to lobby other countries for support.

A spokesman for the Department of Foreign Affairs said Australia “strongly supports a full and credible investigation into the cause of the explosions” but did not explicitly answer whether the government would push for a UNHCR mission. 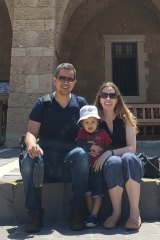 “Lebanon’s investigation into the explosions is ongoing. Australia supports all Lebanese efforts to deliver justice to the victims,” he said.

Ms Copland said any justice had to start with the truth coming out about why the chemicals were stored there in the port, who approved it and who knew the conditions were unsafe.

There are also practical reasons for an investigation, with many victims unable to receive insurance payouts until there is an official finding about the cause of the blast.

The pandemic has continued to hamper the recovery, with global charity UNICEF warning children in Lebanon were “bearing the brunt of one of the world’s worst economic collapses”.