Taylor Swift dropped two deluxe songs from ‘Evermore’ on Jan. 7, and fans are convinced that one track features digs at her ex-BFF, Karlie Kloss, and ex-boss, Scott Borchetta.

The Evermore deluxe tracks are here! Taylor Swift officially dropped two new songs, “Right Where You Left Me” and “It’s Time To Go”, on Jan. 7. Like most of the other songs on Evermore, the songs feature gut-wrenching lyrics that seem to partly be based on fictional stories. However, fans have pointed out that some of the lyrics of “It’s Time To Go” appear to be autobiographical for Taylor, as well.

“It’s Time To Go” is about knowing when it’s time to leave someone or something behind — whether it’s a lover, a friend, a job, etc. The song features tales of divorce and losing out on a dream career to someone less deserving, which Taylor clearly drew on outside inspiration for. But the lyrics about losing a friend seem to address Taylor’s apparent fallout with model Karlie Kloss.

“When the words of a sister, come back in whispers, that prove she was not, in fact, what she seemed,” Taylor sings in the first verse. “Not a twin from your dreams, she’s a crook who was caught.” Fans took to Twitter to explain that they think the lyrics are in reference to Karlie being managed by Taylor’s nemesis, Scooter Braun.  Although Taylor has never confirmed that she is no longer friends with Karlie, their lack of public interaction in recent years has fans convinced that something happened between the former besties. Plus, Karlie noticeably did not speak out in defense of Taylor when she feuded with Scooter after he purchased the rights to her masters in 2019. 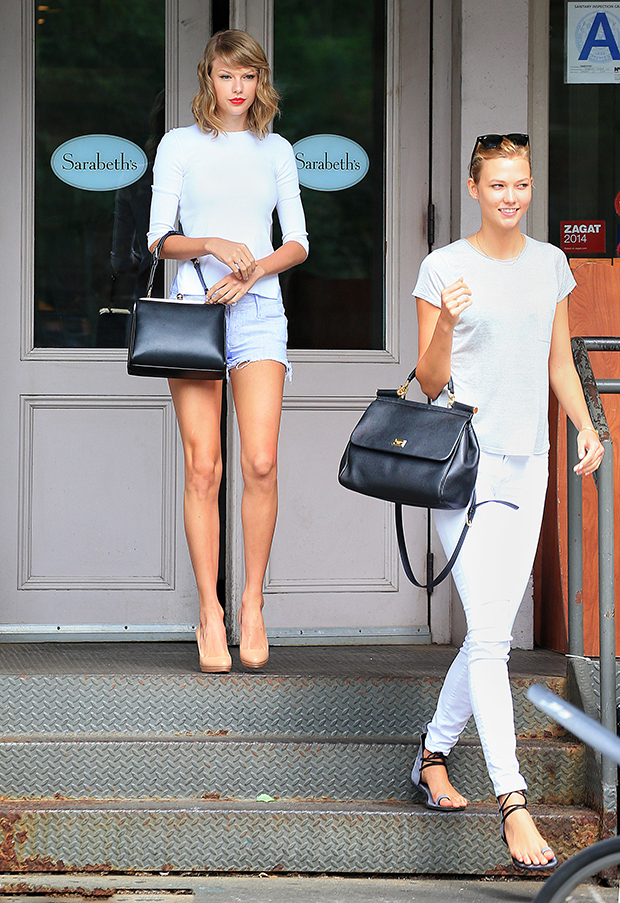 However, between 2014 until 2016, the ladies were the ultimate BFFs. Karlie was a recurring member of Taylor’s ‘squad,’ and they even appeared in a photo shoot for Vogue together, which is where fans think the “twin” lyric stemmed from, as they looked remarkably alike in the pictures. “Taylor calling Karlie a crook is still the funniest part of Evermore,” one fan commented, as another wrote, “Taylor calling Karlie a crook is so funny to me HELP.”

Taylor and Karlie’s last public photo together was taken in 2018, when Karlie attended Taylor’s Reputation tour and hung out with the singer backstage. The model also spoke about the pair’s rumored ‘feud’ on Watch What Happens Live with Andy Cohen in March 2019. “Taylor is incredible and I feel really lucky to call her a friend,” Karlie said at the time. She also assured fans that she and Taylor were “still friends” during her 73 Questions segment with Vogue in Oct. 2018.

Meanwhile, “It’s Time To Go” also appears to have lyrics that call out Taylor’s former label head, Scott Borchetta. Scott runs Big Machine Records, which Taylor signed to when she was just a teenager. However, she left the label in 2018 when Scott would not allow her to earn the rights to the masters of her first six albums without recording six new albums on the label first. Instead, he allowed Scooter to purchase the masters for $300 million — an option Taylor did not have.

“Fifteen years, fifteen million tears, begging til my knees bled,” Taylor sings. “I gave it my all, he gave me nothing at all, then wondered why I left. Now he sits on his throne, in his palace of bones, praying to his greed. He’s got my past, frozen behind glass, but I’ve got me.” Fans on Twitter say that Taylor “ended” Scott with these scathing lyrics. As always, Taylor does not comment on who her songs are about, and lets the lyrics do the talking!

RTD has slammed the brakes on layoffs for roughly 250 operators and other frontline employees, saying $200 million in expected