Erika, however, said she wasn’t making a threat, but a “promise.”

The “Dinner Party from Hell” continued on “The Real Housewives of Beverly Hills” Wednesday night — and man, did it just keep getting messier.

Last week, Sutton Stracke was urged by her costars — namely Kyle Richards — to air all her concerns and questions revolving around Erika Jayne’s divorce and legal issues to Erika herself during a dinner at Kathy Hilton’s home. When Sutton made it clear she felt Erika was lying about something, Jayne snapped — an argument which was continued last night.

“Everybody wants me to be very honest with you and I’m trying to do that,” exclaimed Sutton, before Erika shot back, “Would you like to get sued?” 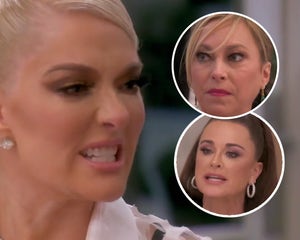 Erika Jayne Cries, Blows Up on RHOBH Costars During Dinner Party from Hell: 'Why Are You Torturing Me?'

As Sutton responded, “No! Of course not!”, Kyle jumped in and said comments like the ones Erika just made only gave “credence” to Stracke’s concerns — which included being dragged into the legal drama herself.

“If you want to talk about someone that has health issues and you think that that person isn’t going to come after you, think again,” Erika then warned, alluding to her ex-husband Tom Girardi. In a confessional, she added, “Sutton’s in over her head. It’s not about me suing them, it’s about be careful what you say about other people that aren’t here. He ain’t dead and gone honey.”

After Dorit Kemsley said, if that’s the case, they should “all be scared,” Erika said Sutton should just “be quiet.” When Dorit said that sounded “a little bit” like a threat, Erika assured them all it wasn’t.

“[Sutton] took it to another level. It’s one thing to ask and talk and say things, it’s another thing to call someone a liar and talk about their health,” Erika continued. “I’m about to really lose my s— on all of you.” 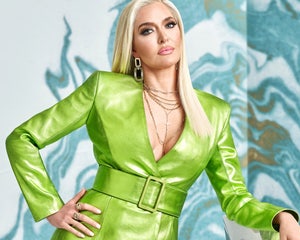 Kathy told them all to calm down and, after taking a beat, Erika looked straight at Sutton and said: “You ever call me a liar again, I’m coming for you. Trust me.”

Stracke was shocked and perplexed by the comment. In a confessional, she wondered, “So you’re suing me? Coming after me? Am I going to wake up in the morning with a horse’s head in my bed? What exactly are you saying here?”

Sutton then said out loud to the group she felt Erika had just “threatened” her. “No, I promised you,” Jayne responded. “I haven’t threatened you, I promised you. I made a promise to you. That’s not threat, honey, it’s a f—ing promise.”

“Don’t push unless you’re ready to get pushed back on,” she continued. “It may not be today, or next year, I will push back. I’m not threatening, I’m promising. Don’t call me a liar … don’t call me a f—ing liar.”

At that point, Sutton had had enough, getting out of her chair as she exclaimed, “I’m not going to be threatened. No way, no. I am not used to people like that and that will make me leave.” As she walked out the door, Erika gave her a shady, “Bye!”, while Kathy, Kyle and Garcelle Beauvais followed Sutton outside to try and talk her off the ledge. Stracke was in tears as they tried to console her, before she left.

Back inside, Erika defended her behavior to the women — telling them all, “You’re not gonna guilt me into thinking I beat up on somebody. The truth is, the word liar … it’s not a good word. If you think I’m gonna accept that on top of everything else I’m accepting, you’re a f—ing idiot.”

The two didn’t speak to each other for the rest of the episode, but the fight was still a hot topic of conversation. While shopping together at an auction house, Kyle and Sutton addressed the incident — with Sutton expressing her frustration that Richards pushed for her to confront Erika at the dinner.

Playing the middle ground pretty deftly, Richards said she didn’t believe either of the women handled the situation correctly.

The entire cast later reconvened at Garcelle’s home for a Haitian dinner party, where Beauvais hoped to introduce the women to the food she grew up on. Erika and Sutton didn’t acknowledge each other at all throughout the evening, which got super awkward when the ladies brought up a pair of pants Kyle wore to the group gathering they had previously behind Erika’s back.

With that, Dorit got up to leave, with both Erika and Lisa Rinna following suit. Inside, Garcelle, Kyle, Crystal Kung Minkoff and Sutton talked, where it became clear that neither Sutton or Erika were planning to apologize to the other.

While Kyle wanted to play peacemaker, Sutton said the two didn’t need a “Band-Aid” to patch up their issues superficially. Instead, she came to the realization that the situation simply is what it is and the two just aren’t friends. Added Crystal: “You hurt her, she hurt you and it’s like over.”