Home » Lifestyle » STEPHEN GLOVER: Decade in prison for lying about where you travelled?

STEPHEN GLOVER: A decade in prison for lying about where you travelled? It’s laughable. Some have served less for murder

How easily we slip into the unimaginable! Think back to before the pandemic — I know it’s hard. If you had been told then that travellers might be sentenced to ten years in prison for lying about which country they had recently visited, you wouldn’t have believed it.

All right, you might have said, such things could happen in Russia or China. It’s what you would expect in North Korea. One might, at an extreme pinch, conceive of such draconian punishments in France if President Macron really lost the plot. But not in freedom-loving Britain. Never. It’s impossible.

And yet it is happening here. That’s how far we have come in almost 12 months. This is how presumptuous our Government has become. A person arriving in Britain who conceals having visited any one of 33 countries on the so-called ‘red list’ in the previous ten days faces a prison sentence of up to ten years.

So said Health Secretary Matt Hancock in the Commons on Tuesday. He reminds me of a truculent bantamweight boxer squaring up to his adversary — in this case, liberty and decency and good sense — as he threatens soaring fines for a string of misdemeanours, culminating in ten years in jug. 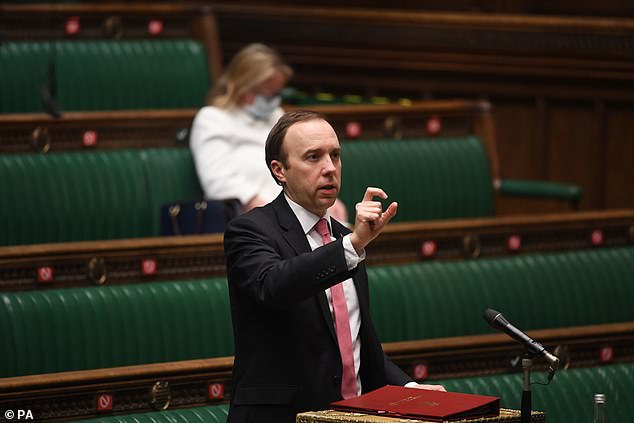 Health Secretary Matt Hancock updating MPs in the House of Commons, London, on the latest situation with the Coronavirus pandemic

A friend of mine has a house in the wilds of Portugal (one of the 33 proscribed countries) 20 miles from the Spanish border. If he nips across into Spain, and flies to Britain without admitting he has been in Portugal, should he be sentenced to ten years in jail? A fine, certainly. But not incarceration.

Some say the law (which No. 10 claims is already in place) will never be used, or that judges wouldn’t apply such harsh sentences. They could be right — but that is beside the point. A Government that can even contemplate severe measures of this sort has lost sight of what is just, reasonable and proportionate.

Labour is just as bad, if not worse. There wasn’t a squeak of protest about the threat of ten years in prison from Sir Keir Starmer at Prime Minister’s Questions yesterday, though he did later express some reservations. Labour (like Nicola Sturgeon in Scotland) advocates even more restrictions — plus further untold billions of financial support we can’t afford. 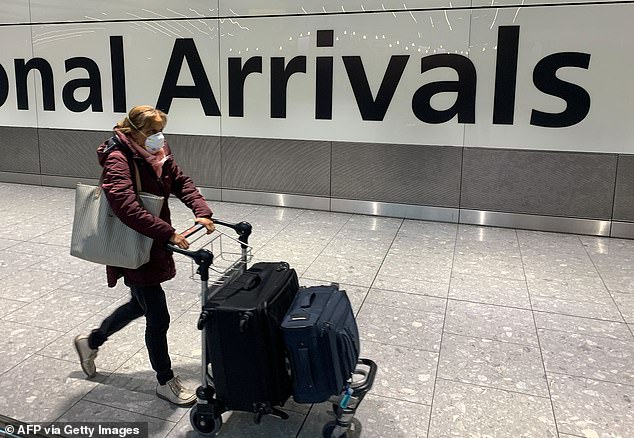 A passenger wearing a face mask at Terminal 5 of London Heathrow Airport in west London on February 9, 2021. There is no suggestion anyone pictured has broken Covid travel laws

The purpose behind the Government’s invoking of imprisonment is, of course, to instil fear. Rule by fear is often effective, especially when there really are things to fear, and people are dying from Covid in large numbers.

Why not try a different approach? For it is an extraordinary reflection that this bullying, negative Government has an inspiring success story to tell, which goes some way to mitigate — or at any rate enable us to forget — its previous errors. I mean the vaccine roll-out.

Britain has administered around six times as many jabs as France and five times as many as Italy, both countries with populations roughly equal to our own. This is an amazing achievement, which should give us grounds for optimism. 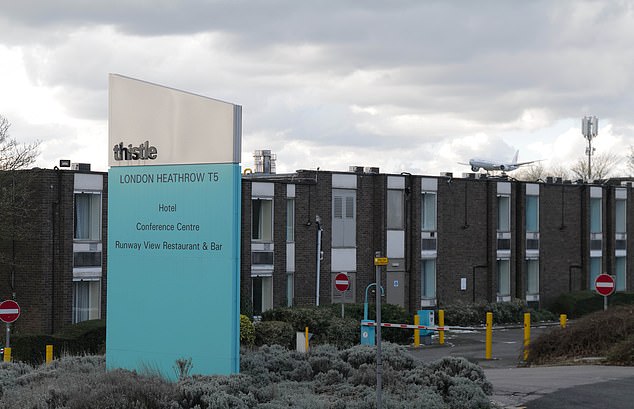 The thistle hotel near Terminal 5 London Heathrow Airport. The airport has been mentioned as one of the new Covid quarantine hotels when the new restrictions come into force

Oh, I know there are those nasty mutant variants, and the Government is right to be concerned about them, though not to use them to batter us into submission and increase our already high anxiety levels.

But it is because the NHS is triumphantly on track to vaccinate everyone over the age of 50 by the end of April that Boris Johnson finds himself in a position unique among European leaders.

He alone can plausibly paint a picture of this country getting back to something resembling normality by May, while adding that we will have learn to live with the virus for the foreseeable future.

And yet the mood music from No. 10, the Health Department and the Government’s myriad and ubiquitous scientific advisers is unremittingly grim. The latest contributor is Transport Secretary Grant Shapps, who spread despondency from various broadcasting studios yesterday morning.

On BBC Radio 4’s Today programme he said that ‘people shouldn’t be booking holidays right now — not domestically or internationally’. This was inconsistent, as well as pessimistic, since Mr Hancock has already informed us that he is holidaying in Cornwall this summer. 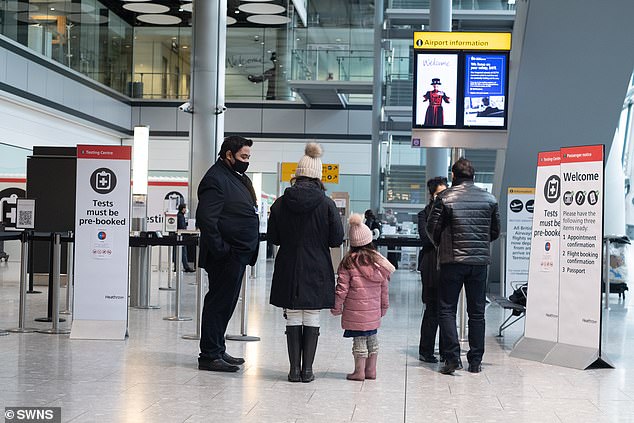 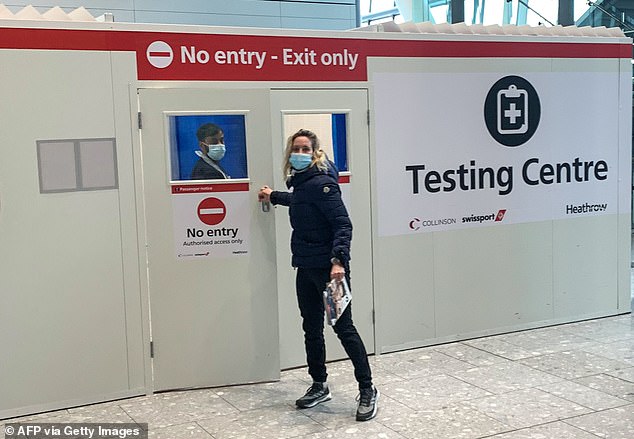 A woman exits a Covid-19 testing centre at Terminal 5 of London Heathrow Airport in west London on February 9, 2021. There is no suggestion anyone pictured has broken Covid laws

Couldn’t Mr Shapps be more upbeat? We don’t expect promises, but a ray of hope after five weeks of winter lockdown would be welcome. On BBC Breakfast he unhelpfully pointed out that ten years in jail for miscreant travellers is ‘a tariff [and] not necessarily how long somebody would go to prison for’. What a relief!

Result of Mr Shapps’s eruption of doom and gloom: more agony in the travel business and airline industry, both of which are struggling to survive — and further plans to get rid of employees.

Evidently the people who don’t fret about the dire state of the economy or understand its needs — to wit, Messrs Hancock and Shapps, plus battalions of scientific advisers headed by Professor Chris Whitty — are more in charge of Government policy on the pandemic than ever before.

Why can’t we justifiably hope for better times around the corner? It’s not just the reality of effective large-scale vaccination — the current seven-day average is over 400,000. Daily Covid cases have been tumbling: yesterday’s figure of 13,013 was less than a fifth of the number on January 8. Deaths, though still high, are also falling.

The Government could continue dragging its feet while dreaming up new punishments and restrictions for us. Or it could accept that the situation is changing faster than seemed possible only a few weeks ago, and that it’s time to come up with a plan for saving the economy and restoring the nation’s sanity. 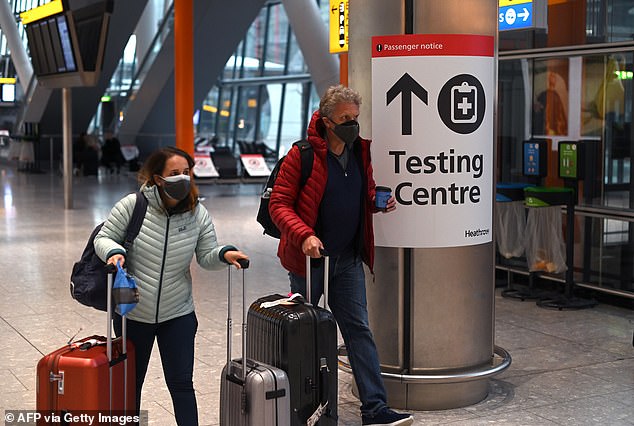 A sign directs passengers to a Covid-19 testing centre at Terminal 5 of London Heathrow Airport, February 9, 2021. There is no suggestion anyone pictured has broken Covid laws

Needless to say, it’s mostly up to Boris — the booster who has seemingly become a doomster. At the No. 10 press conference yesterday, he appeared to side with Mr Shapps on the question of summer holidays. Earlier, at Prime Minister’s Questions, he wouldn’t commit to England’s schools returning on March 8. It’ll be a near-calamity if they don’t.

Why this erstwhile optimist has become as cautious as Aunt Maud is not hard to fathom. He has sometimes over-promised and under-delivered. He has been either slow or reluctant to impose all three lockdowns in England. Boris does not want to add to his tally of political scars.

But with the phenomenal success of the vaccine programme, this is the moment for the PM to break free of the one-track-minded scientists who surround him, and trust his own instincts.

Before he finally unveils his exit plan on February 22, I hope he will also ignore those ministers who have grown too fond of corralling and controlling us. He surely can’t believe it’s a good idea to throw someone in jail for up to ten years for failing to put the name of a country on a form.

No one apart from the Prime Minister can transform the negative mindset of this Government. This is almost certainly his greatest challenge yet. Timid Boris or brave Boris: which is it to be?