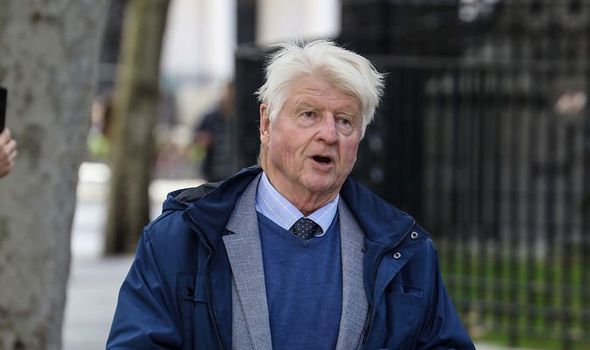 In an exclusive interview, the Prime Minister’s father branded Insulate Britain’s illegal road protests “counter-productive”, saying, “I sympathise with them but they need to act within the law. I’m not sure blocking motorways is helpful to their cause. They will turn off a lot of potential supporters.”

Mr Johnson, 81, who is currently promoting his new novel From An Antique Land, added: “If you go to my website you’ll see me wearing an XR badge addressing a rally in Trafalgar Square. I care deeply about environmental issues and will be up in Manchester” – at the Conservative Party Conference – “this week talking at a couple of events about the urgency of tackling climate change and the nature crisis.”

“Tony Blair used to excuse John Prescott’s outbursts by saying ‘John will be John’. I think this was an ‘Angela will be Angela’ moment,” he said. “A lot of licence is given to her. Nobody can pretend she didn’t have it tough at the beginning of her life. But she’s not my Number One target for personal venom. I’d say give her leniency; I know where she’s coming from.”

Stockport-born Rayner, 41, told a Labour Party fringe meeting, “We cannot get any worse than a bunch of scum, homophobic, racist, misogynistic, absolute vile … banana republic, vile, nasty, Etonian … piece of scum,” before adding that she had “held back a little”.

Stanley, as blond and bouffant as son Boris, twice failed in bids to become a Conservative MP. He admits that, when standing in Cambridge, he spelt the university city’s name incorrectly in his election address, leaving out the ‘d’, and mistakenly wrote ‘Conservatives believe in more talk and less action’.

His latest novel is set in Cambodia and the USA. “It’s not so much an environmental thriller more a personal/political drama,” he said.

“It’s all about Su Soueng, a woman who at the age of seven or eight was forced to flee Pol Pot’s regime after the Cambodian civil war with her mother and grows up in Washington DC. Out of the blue as an adult she is invited to work in Cambodia for a charity and begins a quest to discover what happened to her father under Pol Pot.

“It’s set soon after 9/11, George W Bush is president and I touch on America’s role in supporting the Khmer Rouge and deals done between Washington and Beijing.

“There’s also an archaeological subplot involving a lost temple bigger than Angkor Wat. It’s a book I’ve been thinking about over the years and lockdown enabled me to put the finishing touches to it.”

He added, “I’ve been juggling three careers since the sixties – writing, politics and environmental campaigning. Next year I’ll be at a big nature conference in China and my next book will be a factual one about plastic – we’re drowning the planet in a sea of plastic.”

Cornish-born Mr Johnson, now a TV celebrity, appeared on Channel 4 quiz Countdown last week when he regaled host Anne Robinson with tales of a challenge involving bull’s testicles on I’m A Celebrity…Get Me Out Of Here.

His novel The Commissioner was made into a 1998 film starring John Hurt.

Johnson is a trustee of the Gorilla Organisation and an Ambassador for the United Nations Convention on Migratory Species. In 1984 he was awarded the Greenpeace Prize for Outstanding Services to the Environment.

He has four children by his first marriage to the recently deceased painter Charlotte Johnson-Wahl – Boris, Rachel, Leo and Joseph, and two children, Julia and Maximilian, by his second marriage to Jennifer.