Home » Lifestyle » Spoilers: Horror accident, an STI, and a proposal in Neighbours 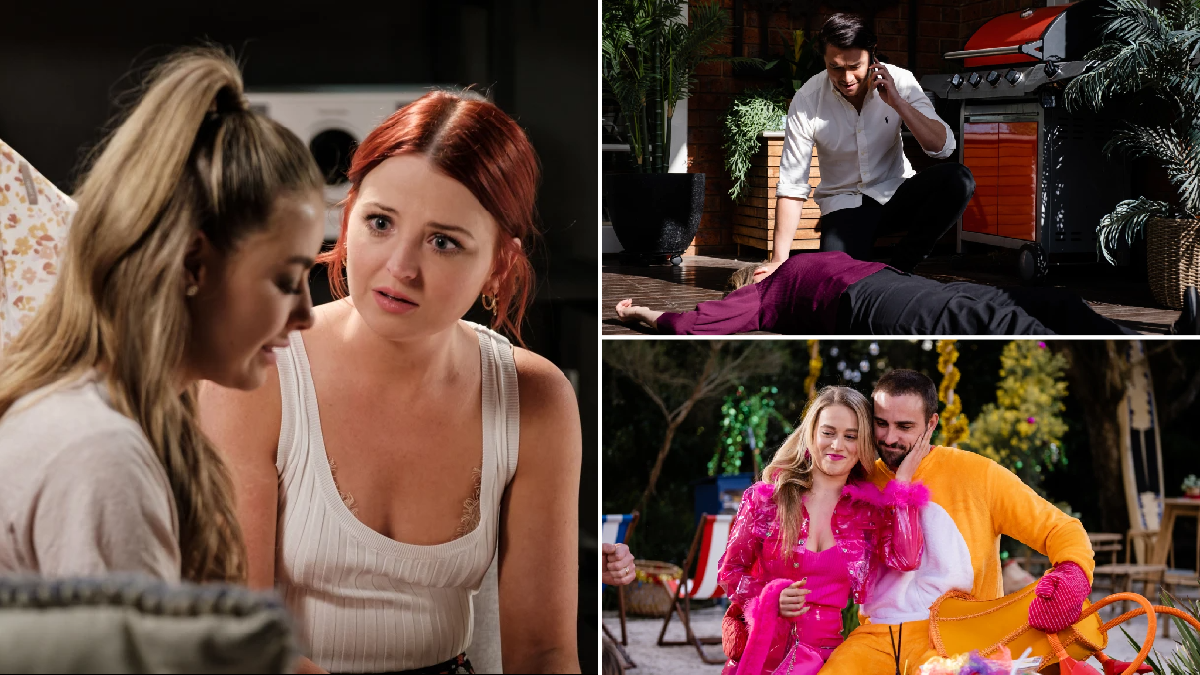 It’s a roller coaster of a week in Neighbours with highs of marriage proposals and lows of someone clinging on to life.

Kyle (Chris Milligan) has been facing his own mortality of late with his diagnosis and he starts to think Roxy (Zima Anderson) would be better off without him. She has other ideas and is about to prove it in a big way.

But while things are looking up for them, they’re looking a bit dire for Jane (Annie Jones). Jane goes against Nic’s (Charlotte Chimes) wishes and organises an event. But Karma comes back to bite her in a big way for not listening to her daughter, which leaves her in a situation where and it’s touch and go as to whether she’ll be found in time.

It’s a roller coaster for the polyamory trio too when on the one hand things are hotting up for them in the bedroom, but on the other an itch that spreads causes them serious problems.

It’s also not plain sailing for Terese (Rebekah Elmaloglou) who is desperately trying to battle her demons while getting to the bottom of what Glen (Richard Huggett) is up to. Glen isn’t making things easy, but Terese manages to crack one mystery and is shocked by what she learns.

Here’s what’s ahead in Neighbours.

Right now, the future looks a bit bleak for Kyle. He convinces himself that he’s a burden on Roxy and that she’d be better off without him being a dampener on her future, but she has other ideas. She is ready to prove how serious she is about their relationship and being there for him no matter what, so she pops the question. Kyle is stunned, he did not see that coming. But he’s totally up for it – if she’s game, then he is too. Sheila is a little less enthused when she learns about the shock proposal, but once the couple reassure her they’d get wed regardless of his illness, she’s straight down the hat shop.

Jane tries to do a good thing for her daughter and the universe tells her; Nope. After the teddy cam incident, the parenting trio don’t feel like celebrating Isla’s naming day. Jane thinks this is absolutely the wrong move as they’ll come to regret it, and she lets them know it, which of course doesn’t go down well. Nic turns on her mum for sticking her nose in. While hurt by the confrontation, Jane won’t be deterred, and decides to secretly set up the naming day anyway. While admirable, her determination is misplaced. She enlists Chloe’s help to keep them busy, but while Jane is setting up the party alone, she suffers a nasty accident that leaves her unconscious. Luckily, Leo finds her, but in what state? Will she pull through?

Why is Glen here?

Ah the question on everyone’s lips. Glen disappeared over 30 years ago, so why is he back now? The whole thing is shrouded in mystery, but Terese is about to make one shock discovery. She attempts to do some digging into his past to shed some light on his appearance, but in doing so the two spend a little time together. Glen uses this opportunity to warn Terese off her husband. Feeling the vitriol seeping from his pores, Terese is intrigued and decides to accept Glen’s support in her relationship breakdown. But here is where she makes the shock discovery – she attends her AA meeting and who should be sitting there? Glen. That’s one of his secrets uncovered – he’s an alcoholic too. Terese goes on to learn that Glen has accepted a job at the vineyard, not the best place for someone battling an addiction to drink. But he’s setting up roots which begs the question, if he hates Paul so much, what is he up to?

Time to bring Mick down

Enough is enough of pain in the bum Mick – even Harlow feels it now. She’s secretly kicking herself for hiring the idiot. She swallows her pride and bites the bullet, asking Chloe to team up with her to knock him off his perch. Can they put their heads together and get him ousted?

Itchy feet (among other things)

Amy breathes a sigh of relief as both Ned and Levi’s itching starts to subside. But her relief is short-lived. They might be over the worst of it, but there’s about to be an outbreak amongst the locals and it’s all their fault. Will it be traced back to them?

Melanie has been having a tough time of it navigating the responsibilities of being a stepparent to Toadie’s standard of parenting. But though that’s been tricky, that’s nothing compared to the unexpected pickle she’s about to find herself in. She sets up a psychic stall for the party as a bit of fun and discovers she has a bit of a ‘gift’ when a few of her psychic guesses end up being right. Little impressionable Nell is in awe of this ability and approaches Melanie with a huge request that could put Mel’s relationship on the rocks again. Will she be able to say no to the little girl?

Amy is preparing for the Christmas party and hoping she, Ned and Levi can see eye to eye for the day. Unfortunately for her, prep for the party goes awry and a massive decoration falls off the roof of the Flamingo Bar. Ned and Levi are forced to work together to fix it, working up quite the sweat in front of Amy’s eyes. Suddenly it’s not the Christmas party on her mind, but a party of three instead.