Offering more home-care to patients would dramatically shorten their hospital stay and ease the burden on a healthcare system under pressure from a backlog of elective surgeries, new analysis shows.

A KPMG report commissioned by Medibank found a pilot program for hip and knee replacement patients halved their time in hospital – reducing their length of stay by one to three days – after they were allowed to go home early with follow-up visits and no out-of-pocket costs. 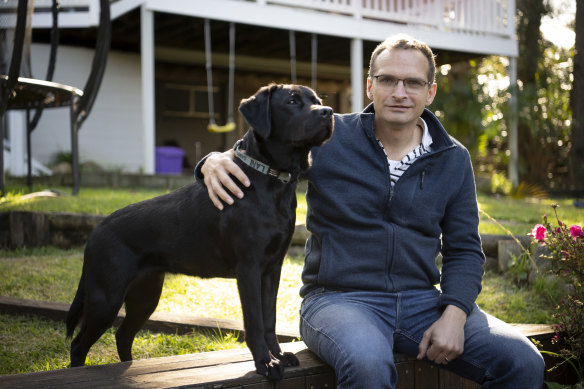 Paul Murgatroyd, of Allambie Heights, with his labrador Lani, decided to partake in the short stay-no gap study and only stayed one night in hospital following a hip replacement operation.Credit:Wolter Peeters

The average length of hospitalisation for a hip or knee replacement in Australia is six days.

If the program was expanded across Australia’s public and private hospital systems, and one in 10 patients needing hip and knee replacements, or hernia and gallbladder surgery choose this option, it would free up 23,000 bed days for other patients in 2023, and 72,000 bed days in 2030, the analysis showed.

Wait times for elective surgeries in public hospitals have blown out by a week, from 41 days in 2018-2019 to 48 days in 2020-2021, despite federal and state efforts to work through the backlog, the latest elective surgery report from the Australian Institute of Health and Welfare found.

“Our health system is under stress. Our surgical wait lists are blowing out again. We need to find more capacity in our system and that is not going to happen by building more hospitals,” Wilson said.

“Reform is needed. It’s urgent. It is essential that we introduce clinically safe, patient-centred models of care now.”

Paul Murgatroyd, 46, chose the short-stay option – only staying in hospital one night – following his right hip replacement in June.

The prospect of recovering in his own home at Allambie Heights, with his wife’s home cooking, three children and pet labrador was considerably more appealing than the bed, food and ambience a hospital would provide.

“It sounds a bit daunting at first that you’ll be coming home after a day in hospital,” Murgatroyd said. “But having done it, it makes a lot of sense.”

“I went home on crutches and had great support from the hospital … I could call at anytime. A nurse visited to check up on me and a physiotherapist has come over once a week for six weeks,” he said.

Murgatroyd is planning to use the short-stay option again following his left hip replacement surgery next week.

Wilson said the short-stay model was not for everyone.

He said patients with complex health needs and comorbidities will need longer hospital stays, “but when it is safe to do so, it’s highly regarded, effective and well-liked”.

Hip or knee replacement patients pay on average $1200 out of pocket, and are expected to pay $1400 by 2030. Assuming 10 per cent of eligible patients opted for the short-stay program in 2023, they would save $10 million in out-of-pocket costs collectively or $34 million in 2030, the report projected.

The KPMG analysis found there was no significant difference in the probability of having a medical complication between the 284 patients in the short-stay program and patients receiving conventional care in hospital, echoing international studies.

“The issue for the insurance industry is that consumers are juggling mortgages that are going up, who also want to buy lettuce and health insurance. Insurers want to keep insurance costs down and private hospitals want to maximise revenue,” Duckett said.

“A private hospital can increase revenue by offering rehabilitation, which might be two hours a day of physiotherapy … but the hospital is getting payment for the days you’re in a bed, plus the meals, the nurses, all those other elements.

“No wonder it’s more cost-effective to have those couple hours of physio at home,” Duckett said.