A Greens and Labor-dominated Senate inquiry has called for an immediate review of the federal government’s $50 million program to help fund private companies’ exploratory drilling for gas in the Northern Territory’s Beetaloo Basin.

Under the Beetaloo Co-operative Drilling Program, the federal government has awarded grants totalling $21 million to Empire Energy, a junior gas company chaired by Paul Espie, who is also chairman of the Liberal-aligned Menzies Research Centre. 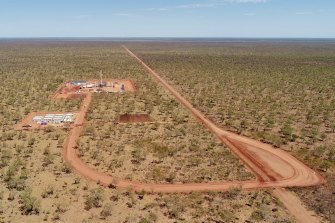 The Beetaloo is one of the gas fields the government plans to further develop as part of its planned “gas-led recovery” from the COVID-19 pandemic.

The drilling program is part of a $224 million funding commitment made last December to help industry establish a gas field in the Beetaloo Basin, 600 kilometres south of Darwin, as part of the federal government’s gas-fired recovery from the coronavirus downturn.

The inquiry was conducted by the environment and communications committee, chaired by Greens senator Sarah Hanson-Young. In a majority report endorsed by Labor and the Greens, it raised concerns over perceived conflicts of interest in awarding of the grants and recommended the Department of Industry, Science, Energy and Resources immediately review the program.

It also said the federal government should require grant recipients to repay the funding if they produced commercial volumes of gas, and called for a review of the consultation process used to negotiate consent for drilling from Traditional Owners and Native Title holders.

The committee examined potential conflicts of interest arising from historical political donations to the Liberal Party and contact between Empire Energy and Resources Minister Keith Pitt, who is responsible for the program, and federal Energy Minister Angus Taylor, who represents the resources portfolio in cabinet, before the grants program was announced.

Coalition senators on the committee rejected the inquiry’s call for a review of the funding program. In a dissenting report, they said the majority report “ignores written evidence from Empire confirming that there had been no discussion with ministers or staff” about the grant program.

Mr Pitt said the funding was awarded through an independent process.

“That decision was made by me, the Minister for Resources, based off the advice and of course the recommendations of an independent panel who made an assessment against the guidelines for the Beetaloo program, which I accepted,” he said.

The Department of Industry, Science, Energy and Resources said its assessment panel had considered the grant to Empire Energy and found it met the eligibility criteria for public funding. However, the inquiry’s report noted that a freedom of information request revealed one of the assessors did not fully endorse the grant.

It also said the information provided by the department “seems to indicate” the electorate where the drilling was located was considered in the grant process, but the relevant portion of the documents submitted were blank and it was unclear what, if anything, had been omitted.

Senator Hanson-Young said evidence to the inquiry showed the Beetaloo grant program was “already poorly administered” and called for Labor to support a Greens’ motion to remove its funding.

“The Parliament should not ignore this evidence and should vote to terminate this fund,” she said.

The Senate will vote on Wednesday on the motion from the Greens to block the Beetaloo drilling program. Labor’s caucus resolved on Tuesday to reject the Greens motion.

It is a controversial issue for Labor, which is split between the left flank calling for fossil fuels to be phased out, and its right wing, including resources spokeswoman Madeleine King, which backs expansion of the gas industry in Australia.