Schoolgirl, 7, writes a letter to Tesco and Sainsbury’s saying she is ‘very, very angry’ after she failed to find Women’s World Cup football stickers on sale in their stores

A schoolgirl who struggled to find Women’s World Cup football stickers in Sainsbury’s and Tesco has accused the British supermarkets of lacking gender equality.

Revealing that she has previously seen the stores selling stickers for the Men’s World Cup, Immy expressed her disappointment in an open letter to British supermarket.

Her mother Caroline Masterson, who shared the encounter on Twitter was told by a Tesco customer service representative that they are unable to stock all collectible items. 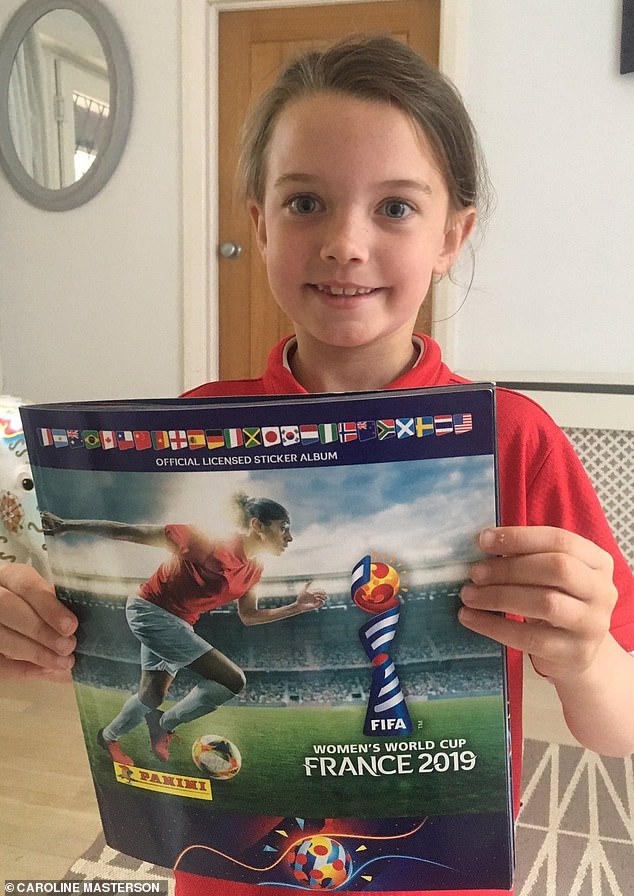 Immy Masterson (pictured), seven, from Horsham, West Sussex, accused Sainsbury’s and Tesco of not giving equal gender representation to the Women’s World Cup as the men’s games, by not stocking Lionesses stickers in the majority of their stores 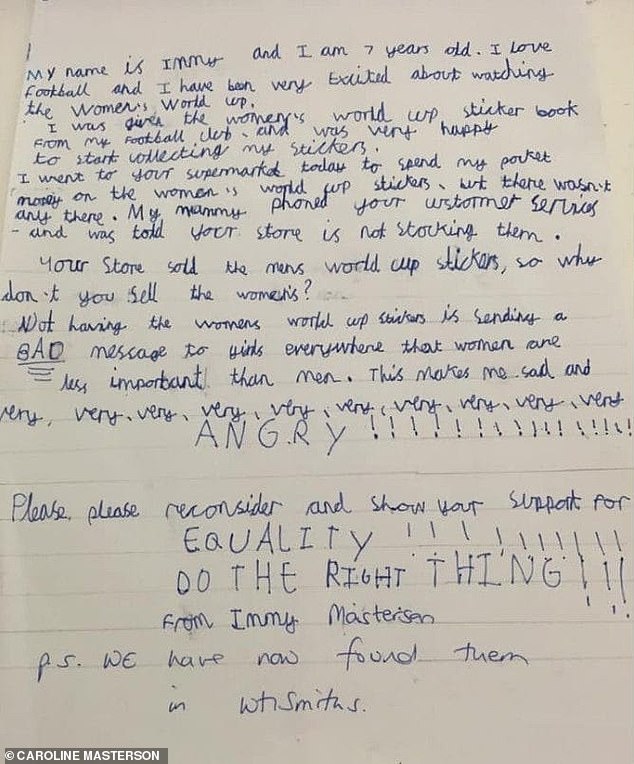 The schoolgirl wrote an open letter, explaining to British supermarkets that they risk sending girls a message that they aren’t as valued as men

According to The Telegraph, the mother and daughter duo were able to gain the support of former Sports Minister Tracey Crouch, since speaking out against the supermarkets.

Immy accused retailers of sending the message that men are more important than women by not offering equal representation.

In her letter which has received a stream of responses from others who’ve struggled to find Lionesses stickers, the seven-year-old revealed she had been excited about collecting them and had planned to use her pocket money to cover the cost.

She wrote: ‘My name is Immy and I am 7 years old. I love football and I have been excited about watching the Women’s World Cup. I was given a Women’s World Cup sticker book by my football club and was very happy to start collecting stickers.

‘I went to your supermarket today to spend my pocket money on the Women’s World Cup stickers but there wasn’t any there. My mummy phoned your customer services and was told your store is not stocking them. 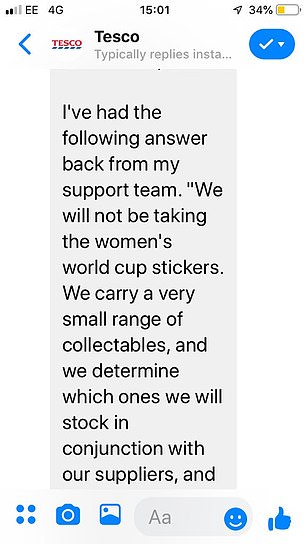 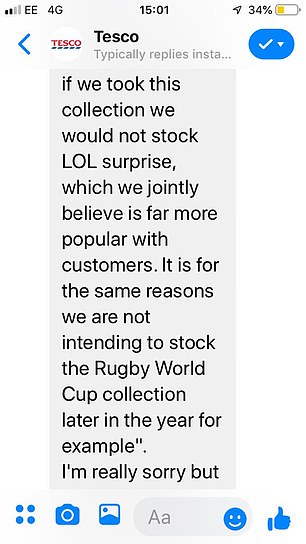 Immy’s mother Caroline Masterson, contacted Tesco customer service on Twitter and was told that they carry a very small range of collectables 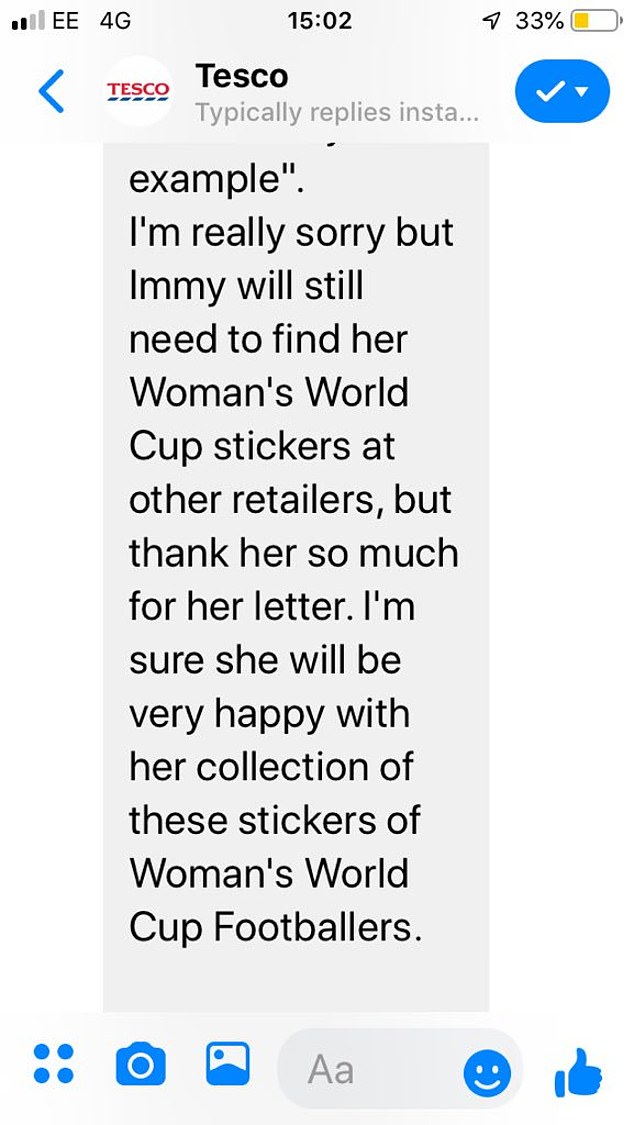 Writing on Twitter, one person commented: ‘Shame on you Tesco. My daughter was very disappointed not to find the stickers in your store too. How can you judge demand if you don’t sell them – viscious cycle! So you think LOL is for girls but not football?’

Another wrote: ‘Well done to Immy for writing her letter. Myself and my eldest daughter have started collecting and couldn’t find a single shop where we live that stocks them (causing tears). It seems that WHSmith stores are the only places near us that are selling them.’

A third added: ‘Been trying to find these in local newsagents, ended up having to order a couple of boxes from Germany. Absolutely ridiculous.’

A number of Twitter users revealed they could relate to Caroline’s situation, after her experience was picked up by Women In Football who have over 20,000 followers 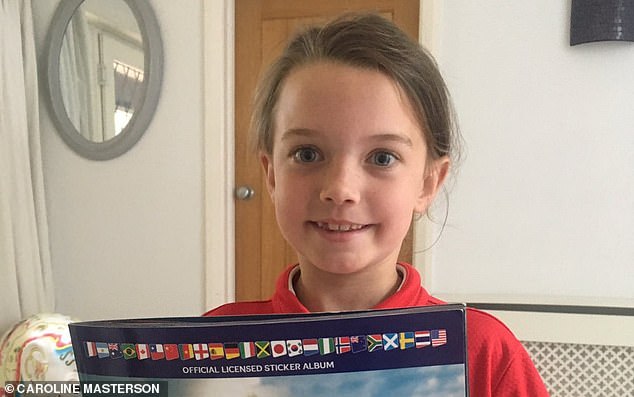 Speaking to The Telegraph a Tesco spokesperson explained they have limited space and are only able to stock stickers for the Women’s World Cup at their One Stop convenience stores.

‘Just like Immy, we love football and are very excited to cheer the teams on during this year’s FIFA Women’s World Cup.

‘We would like to apologise to Immy for not stocking the Panini stickers she was looking for at her local Tesco store but we do stock the FIFA Women’s World Cup sticker collection at our One Stop convenience stores, of which there are over 700 around the UK.’

A Sainsbury’s spokesperson told Mail Online:  ‘The Panini Women’s World Cup stickers are available to buy in around 600 of our supermarkets and have been popular with customers.’