Home » School closures do more harm to children than the virus, experts warn

An expert on school closures and child mental health has lambasted the Andrews government for imposing a blanket return to remote learning, arguing it is a disproportionate approach that risks doing long-term emotional harm. 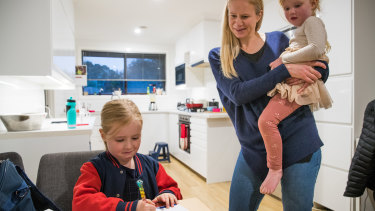 Remote learning is back for five-year-old Estelle (left). Her mother Alex Kirby thinks her daughter is well-placed to cope.Credit:Jason South

The report found that of 1 million enrolled students in Victoria, 337 or 0.03 per cent had a coronavirus infection linked to a school outbreak last year, while 1635 infections were linked with childcare and schools in some way.

It recommended that schools be closed “as a last resort” and a staged mitigation strategy be adopted to open where safe, through measures such as physical distancing, masks and class bubbles.

Professor Russell said she was extremely disappointed that the report’s recommendations had not been adopted, suggesting chief health officers had failed to put in place a COVID plan for schools six months after the last extended lockdown.

“In terms of a blanket closure of all schools in Victoria, I do not understand why that is happening at all,” she said.

Schools should be opened or locked down based on their proximity to community cases, with priority given to keeping primary schools open given the low rate of infection among young children, Professor Russell said.

“We cannot just keep doing this, locking them down all the time. It may seem like a little thing and that children are resilient, well they’re not, it’s very anxiety-provoking. And it’s the most disadvantaged children and families that are worst affected,” she said.

Professor Russell said teachers should also be vaccinated as a priority.

A Royal Children’s Hospital poll on remote learning found more than 50 per cent of Victorian children suffered deteriorating mental health while away from school last year.

The national survey of 2351 school-aged children found the proportion of Victorian children whose emotional wellbeing declined last year due to remote learning was almost double the national average, at 50.9 per cent versus 26.7 per cent.

Murdoch Children’s Research Institute report co-author Sharon Goldfeld said Australian children were being hurt indirectly in the pandemic even though very few had caught the virus, and that Victorian children had suffered the most.

“Australia is one of the few countries in the world where almost the entire effects [of COVID-19] on children and young people are indirect,” Professor Goldfeld said.

The national child health poll should lead authorities to consider the cost-benefit analysis of lockdowns on child mental health, she said.

“We know there is a negative impact of lockdowns, but in Australia we know now that it’s happening here to our kids, without virus.”

Acting Premier and Education Minister James Merlino announced on Thursday that schools would close to all but vulnerable students and children of authorised workers during Victoria’s seven-day lockdown.

Higher education will also return to remote learning but kindergartens and childcare will open as normal.

“As tough as this is for everyone, I think people appreciate we’ve just got to do this,” Mr Merlino said.

Mr Merlino said Friday would be a pupil-free day for all government schools, to allow staff to prepare for remote learning next week. Catholic schools announced that they would also revert to remote and flexible learning.

It will be the second period of remote learning in five-year-old Estelle Kirby’s first year of school, following February’s five-day lockdown.

Her mother Alex Kirby said despite disappointment at the disruption, Estelle and her classmates in prep at Kingsville Primary School were well-placed to cope.

“This will be the second time around and at least they’ve settled in at prep; she’s more familiar with her teacher so I think they’ll adapt quite well,” Ms Kirby said.

“She’ll be pretty good with the lessons online but she’ll just really miss her friends; she looks forward to seeing her little buddies every day.”

Our Morning Edition newsletter is a curated guide to the most important and interesting stories, analysis and insights. Get it delivered to your inbox.