Home » Lifestyle » Rockers with no rules: Kikagaku Moyo are unlike any Japanese band

Japanese psychedelic rock quintet Kikagaku Moyo started out busking on the streets of Tokyo seven years ago. Their jams were so free flowing, the long-haired musicians so caught up in the moment, that they often forgot to break for applause, to allow space for money to be dropped into the guitar or sitar case lying open near their trainered feet.

"Improvisation is essential for us," says Go Kurosawa, 33, the band's drummer and co-vocalist, when we meet at a cafe in east London. "Maybe we'd start with someone telling a story, then express it in music. Or we might go into the mountains and jam there. Getting carried away is the point." 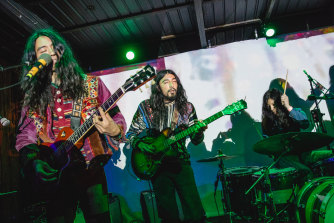 Such on-the-fly creativity has resulted in four albums and a cult following that extends from the USA to Australia, which they last visited in 2017. This month they return with a run of headline dates and appearances at festivals including WOMADelaide, whose one-love aesthetic suits their mix of heavy riffage, traditional folk, trippy Indian vibes and bouncing, mellow melodies.

Close your eyes as you listen, and there are audiences who lie on the ground while they do, and you might see geometric patterns – which Kurosawa finds on the back of his lids after jamming, and what Kikagaku Moyo means in Japanese (and is written as 幾何学模様).

"Geometric patterns are everywhere in nature and design," he says, his fluent English honed by a stint in Denver, Colorado studying for a degree in music business. "Our music is an extension of that."

Better still, respond how you like: wig out. Space out. From its inception in the 1960s psychedelic rock has always been about freedom and self-expression (and okay, hallucinogenic drugs). Just as the Beach Boys and Revolver-era Beatles used chanting, reverb and single-note drones to open the doors of perception, so do Kikagaku Moyo – even if, for them, innovation is more vital than technique. The notion that their music could fall apart at any moment is all part of their appeal.

We formed as a reaction to the rigid laws we experienced growing up…psych rock lets you be sloppy, even out of tune.

"There are no rules," says Kurosawa, the son of a piano teacher mother and a father who imported flowers. "We formed as a reaction to the rigid laws we experienced growing up. Music in Japan is all about skill. Most of the live music venues charge bands instead of paying them.

"None of us had been in a band before. We didn't really know how to play and used fog machines to hide ourselves. Early on we only had one song, so we'd make it stretch to 30 minutes. But psych rock lets you be sloppy, even out of tune."

He tucks a strand of hair behind his ear and smiles, his easy humility belying the respect afforded Kikagaku Moyo as musicians and businessmen. Their current fourth album Masana Temples, which they recorded in Portugal in 2018 with producer/jazz musician Bruno Pernadas, was hailed by the likes of AllMusic as "a great relaxed psychedelic album" and by Uncut as "more assured than ever." Masana Temples is released on their own label, Guruguru Brain, which Kurosawa and guitarist/vocalist Tomo Katsurada run from their base in Amsterdam, where they moved in 2017; the other three band members remain in Tokyo.

"Guruguru" is an onomatopoeic word that means "spiralling", he tells me. It's a phrase that dovetails, variously, with the vivid visual art and hippy-style fashion of psychedelia ("In Japan it's not so related to drug culture"); the trance-like mysticism of the band's music and vocals ("We sing in made up words and sounds"); and the ongoing nature of their touring ("We could play somewhere once and have a nice memory, but we want to be long lasting"). 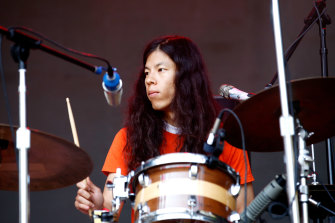 Kikagaku Moyo has always had a (third?) eye on the horizon, says Kurosawa of a line-up that also includes Daoud Popal on guitar, a bassist named Kotsuguy and a sitar played by Kurosawa's brother Ryu. The latter studied the string instrument commonly used in north Indian classical music in Kolkata, India with sitar maestro Manilal Nag. And just as the sitar's shimmering vibes fascinated the Beatles and the Rolling Stones and wove expansively in and out of 1960s anthems such as San Francisco (Be Sure to Wear Flowers in Your Hair), so does it add global spice to a band determined to reach as many people as possible.

"At first we just wanted to get out of Japan." Kurosawa shrugs. "But now we play places like London and L.A several times a year and Tokyo once a year maybe."

Earlier this month Kurosawa assembled an all-star group of psych rockers including Damo Suzuki, former lead singer of German Krautrock legends Can, for a festival in The Hague, in the Netherlands. Being based in Europe helps keep Kikagaku Moyo's international profile high, says Kurosawa, and means that he and Katsurada can accommodate Asian musicians similarly keen to garner more global attention. It also lets Kurosawa pursue a side hustle as a record producer: he is currently in London to work with an all-female band named Platypus Complex, which happens to feature his girlfriend.

Living on opposite sides of the world doesn't worry the five members of Kikagaku Moyo, who plan to write and record a new album on the road.

Still, will there be time for rehearsals when they reunite in Australia?

Kurosawa grins happily. "We have never rehearsed in our lives," he says.

Kikagaku Moyo will tour Australia in February and March including shows at Paddington RSL, Sydney, on March 3 and Croxton Bandroom and Northcote Social Club, Melbourne, on March 4.