When the Chinese Defence Minister recently said the government had been “correct” in its response to the Tiananmen Square protests, he said a lot about China today. For the past three decades, the Party has kept silent about Tiananmen and obliged its citizens to follow suit. To suddenly come out and portray the massacre as an astute policy decision that ensured three decades of “stability” is the mark of a regime that has reassumed the mantle of Communist infallibility.

In Australia, we’ve been outraged at police raids on a journalist and the ABC, but this is standard practice in China. Censorship and surveillance are facts of life in a country that has witnessed a steady resurgence of authoritarian rule.

It’s all to do with that word, “stability”. Without a firm hand, we are assured China would disintegrate into a mass of unruly, competing interest groups. The high standard of living enjoyed by a growing number of Chinese is seen as proof that government policies are successful. It’s an impossible argument to refute because it deals in hypotheticals. It’s akin to saying: “These vitamin pills are successful because I’m still alive.”

In its current exhibition, Hot Blood, the White Rabbit Gallery brings together a range of works that take the temperature of a country that has undergone 30 years of massive social turbulence but returned to the same political position.

The theme of this exhibition, which combines favourite works from the collection with a range of new acquisitions, is a little vague: “Hot Blood presents a group of artists who confound outmoded expectations about China, reflecting unflinchingly on the most uncomfortable truths of our age.”

As every single show at White Rabbit has confounded outmoded expectations about China, I wonder what misconceptions are left? China has been the most dynamic force in contemporary art for decades, producing work that is incisive, ambitious, witty, profound, and often on a grand scale. The censorship that has such an impact on the internet and the publishing industry doesn’t seem to have affected the visual arts in the same way, although Ai Weiwei might see it otherwise; as might Guo Jian, who was deported to Australia for an installation that offended the authorities.

So long as a piece doesn’t launch any direct criticism of the government, the leader, or another sacrosanct topic, artists can exercise considerable freedom of expression. They can also expend a lot of ingenuity in constructing benign explanations for suspiciously subversive works. 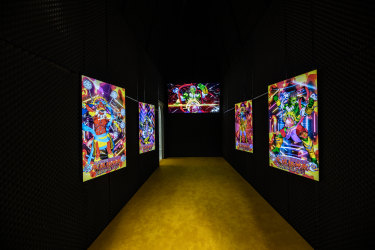 One can imagine a scenario in which Chinese censors become less accommodating with these veils of irony and obfuscation. It’s also possible they may grow intolerant of works that deal with topics such as sexuality, religion and the environment – which account for a large proportion of the White Rabbit holdings.

On the other hand, for those who stick to universal, time-honoured subjects, there are huge rewards on offer in the form of public art programs and lucrative commissions. In China, as in the culture of most one-party states, carrots take precedence over sticks.

White Rabbit shows always begin and end with a bang. In this instance, the first thing one sees is Lu Yang’s Electromagnetic Brainology (2017), a lurid shrine with a high pointed roof in which four fearsome gods cavort on video screens. These animated figures, that bear more than a passing resemblance to the deities of the Hindus or the Tibetan Buddhists, control the four elements and four “afflictions of the nervous system”. 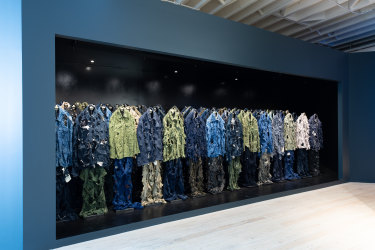 Among works that have been seen before, no censor could object to Shi Zhiying’s High Seas (2008), an 8-metre-long black-and-white painting of the ocean. It’s a meditative piece that reflects the artist’s Buddhist beliefs, encouraging a stance of passivity towards the world. It’s also a breathtaking feat of endurance in which we can trace every stroke of a drying brush.

A more provocative piece making a return is Sun Furong’s Nibbling Up – Tomb Figures (2008). Perhaps this selection is intended as a complement to the terracotta warriors currently on display at the National Gallery of Victoria, but, unlike the craftsmen of the Qin Dynasty, Sun has not tried to bestow individuality on each figure. The installation consists of 100 empty Mao suits in drab shades of blue, green and grey. The suits have been snipped and torn by the artist, suggesting the violence done to the human spirit during the Maoist era. These ‘tomb figures’ are faceless ghosts still wearing the uniforms of their slavery.

For light relief, there’s Jiu Bobo (2015), a deliberately ridiculous video by the Jiu Society, which features three artists singing and dancing in the manner of the Wiggles, celebrating the artificial paradise that is their hometown, Shenzhen. Behind them, as they gyrate inanely, arises a statue of the local God of Wealth, Deng Xiaoping.

The surprise in this exhibition arrives on the third and last floor, with Chen Zhe’s dual photo-series, Bees (2010-12) and The Bearable (2007-10). This body of work has been around for a few years but it’s the first time I’ve seen it. Chen’s theme is self-harm, a habit she picked up when she was a teenager, and relinquished at the age of 21, after she had begun to explore the practice in her photographic work.

The reasons for self-harm are manifold but it’s often a mark of alienation such as people experience in big cities or loveless families. Bodily pain is a reminder of your existence when you feel insubstantial and worthless. Chen invokes this alienation in photos that are by turns confronting and poetic. Her images are not a freak show but a slow journey to the centre of the self. It’s a poignant, melancholy display interwoven with extracts from the artist’s journals that reveal the dark side of China’s economic prosperity. The statistics may be dazzling, but in every city, there are people who are carving lines in their flesh to reassure themselves they are not merely statistics.

Hot Blood is at the White Rabbit Gallery until August 3.