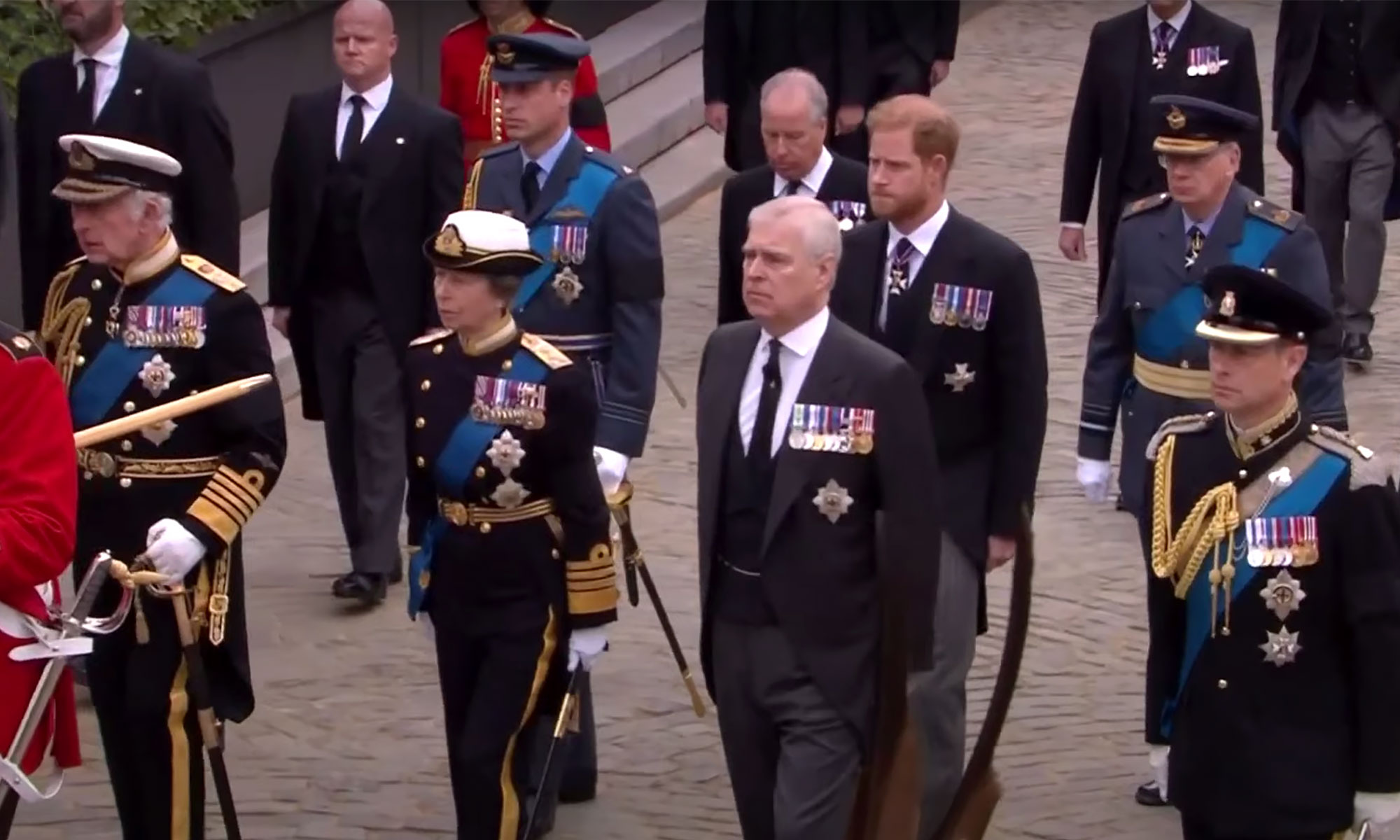 King Charles III and other members of the royal family marched behind Queen Elizabeth II‘s coffin as the Royal Navy transported her to Westminster Abbey ahead of her funeral.

Nearly 100 sailors pulled the State Ceremonial Gun Carriage carrying the queen’s coffin from Westminster Hall on Monday, September 19, with another 40 servicemen following behind. In addition to nearly a thousand members of the Royal Navy who took part in the procession, crowds lined the two-mile walk to Westminster Abbey to pay their final respects to Queen Elizabeth, who died on September 8 at the age of 96. 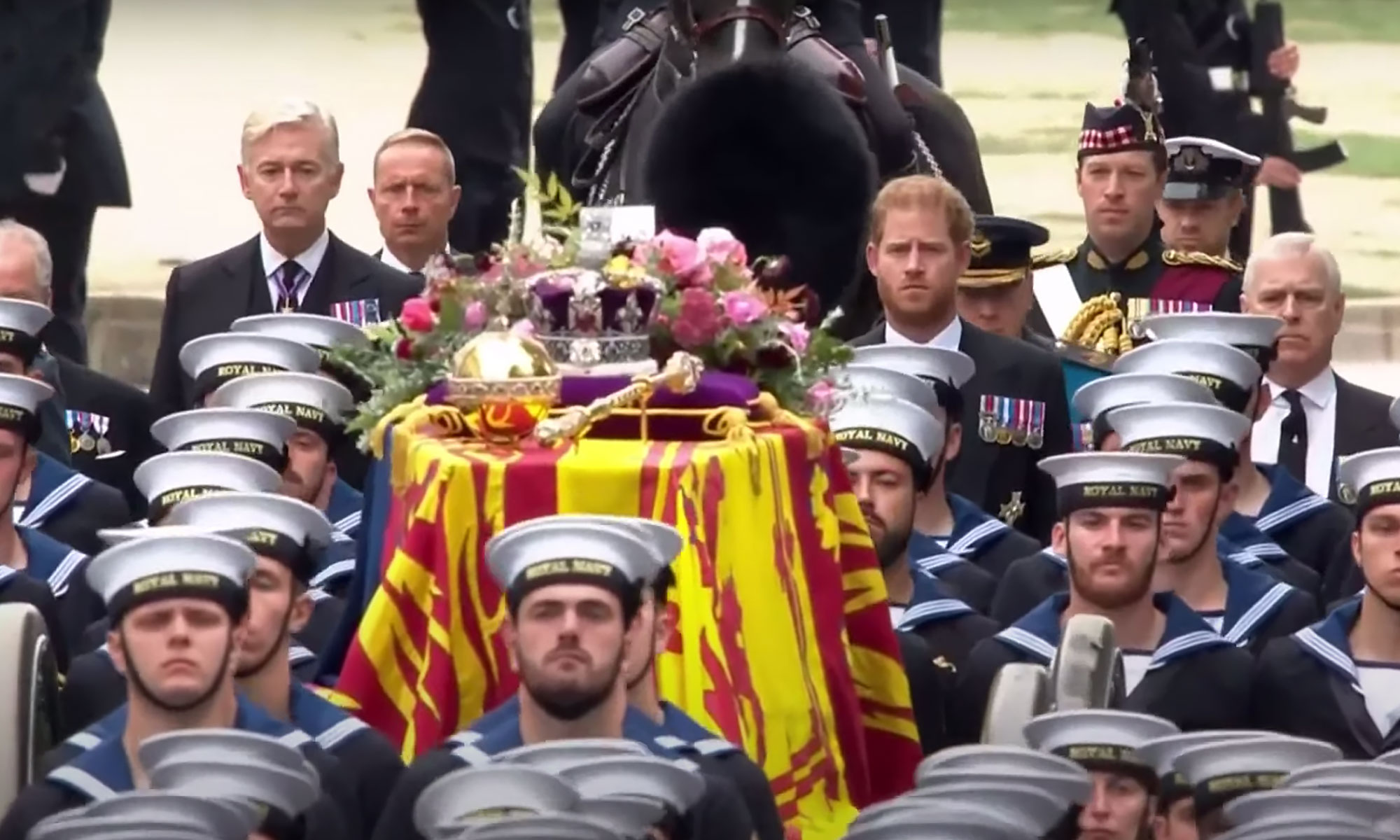 King Charles, 73, marched behind the coffin alongside his wife, Queen Consort Camilla, with several other members of his family — including Prince William, Prince Harry and Princess Anne — following behind, with the brothers walking side-by-side behind their aunt and uncles. The processional also featured the participation of Sir Tim Laurence, Prince Andrew and Prince Edward.

While Charles, William, Anne and Edward all wore ceremonial military uniforms for the march, both the Duke of Sussex, 38, and Duke of York, 62, wore black morning suits. Harry, for his part, was unable to wear such military garb after stepping back from his role as a senior royal in 2020. Andrew had been stripped of his HRH titles after being accused of sexual assault in 2019, which has since been settled out of court. They had both been granted exceptions to wear ceremonial uniforms at separate vigils on Friday, September 16, and Saturday, September 17.

Once the group arrived at Westminster Abbey, they were joined by other members of the royal family. Princess Kate, Meghan Markle, Queen Consort Camilla and Sophie, Countess of Wessex, marched alongside their respective spouses into the cathedral. William and Kate’s eldest two children, Prince George and Princess Charlotte, walked alongside their parents.

After the procession to Westminster Abbey and the memorial service, members of the Royal Canadian Mounted Police, NHS workers, officers from the Police Service of Northern Ireland and the British Armed Forces will transport her coffin to Wellington Arch at the entrance of Buckingham Palace. From there, she will travel to Windsor where — following a committal ceremony — she will be buried alongside Prince Philip, who died in April 2021. The late couple, who married for 73 years, will be “buried together,” according to the royals’ official website.

Three months after she celebrated her Platinum Jubilee, the queen died while at her beloved Balmoral Castle in Scotland. After a procession from Ballater to Edinburgh, her body was brought back to London on Tuesday, September 13. Charles, Camilla, 75, William and Kate, both 40, and Harry, 37, and Meghan, 41, were waiting at Buckingham Palace to receive her.

The following day, the royal family followed her coffin in a procession to Westminster Hall, where the casket remained for well-wishers to come and pay their respects. On Thursday, September 15, the Prince of Wales reportedly told a bystander that the event reminded him of Princess Diana‘s 1997 funeral, when he was 15-years old. The mourner added that William confessed that it had been a “difficult” time for him and his family as they remembered the late queen.

A Breakdown of the Royal Line of Succession

The royal family has been paying tribute to the queen and receiving condolences from the public in the days since her death. “William said he thinks Monday [the queen’s funeral] will be hard,” spectator Bex Neeve told People on Thursday. “[Kate] said it’s been overwhelming and she and William are very grateful for everyone being here. She was emotional. They seemed like they were here to soak up all the love.”